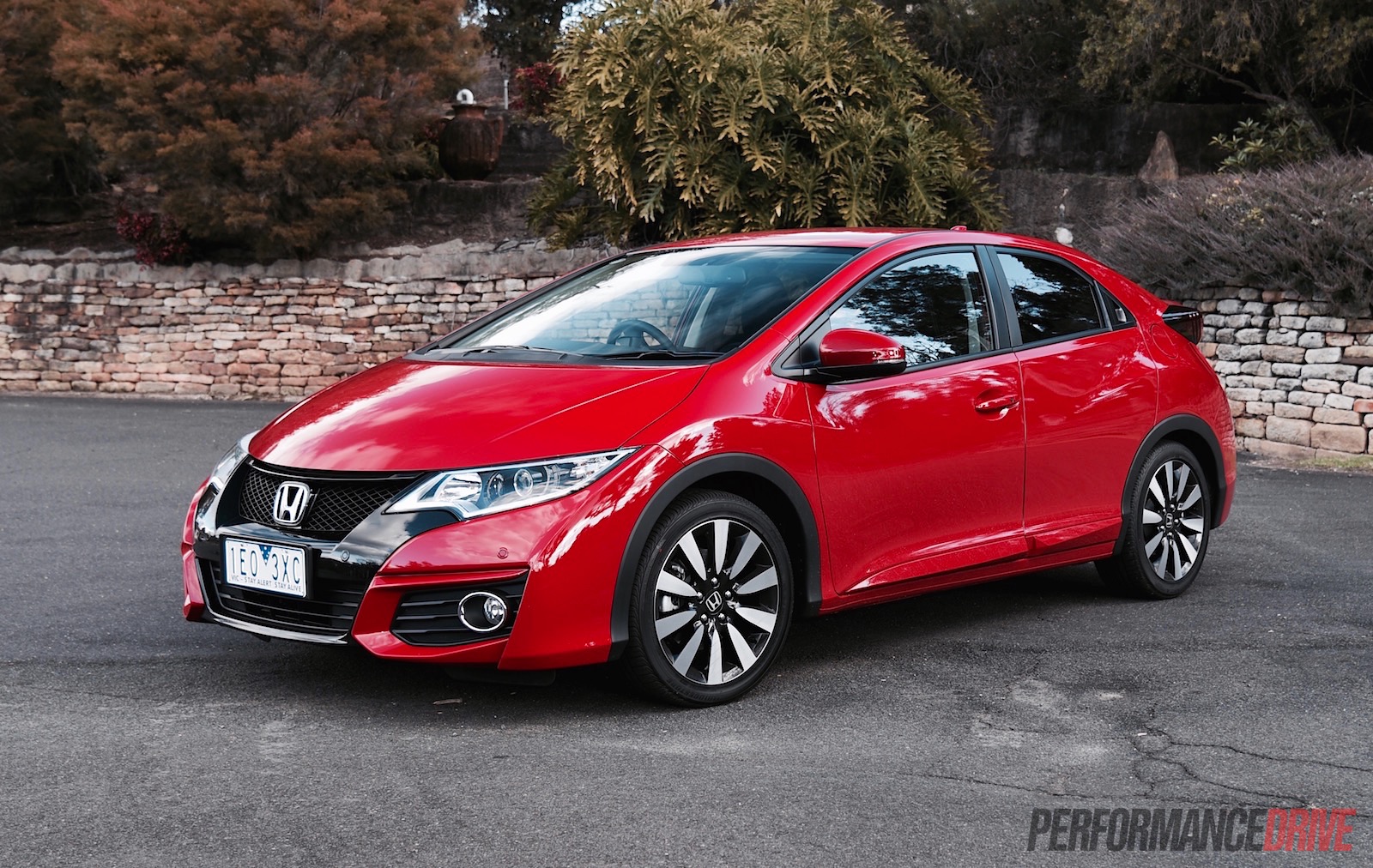 The Honda Civic hatch has an extensive and reputable history. It’s been a dependable, practical, and fuel-efficient small car for over four decades now, and it continues to have a spark of excitement in its eye when it comes to handling. While it’s far from demolishing its competition in terms of sales in Australia, the charismatic hatch offers some quirky Japanese styling for the mainstream segment. Should the 2015 model be on your shortlist? 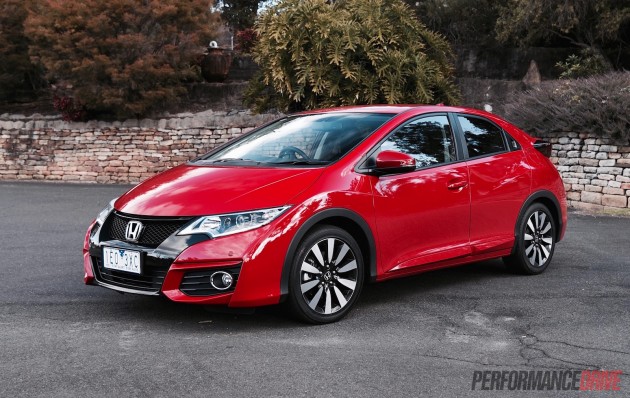 In its respective segment, the Civic is well and truly overshadowed by its competitors in terms of local sales; arguably one of the toughest market segments to penetrate and succeed in. So far this year the Civic sits in 12th place for popularity, with the company having shipped just 2407 units. Some rivals have nearly multiplied this by 10; Mazda has posted 20,427 sales of the 3, the Hyundai i30 reports 15,801 sales, and the trusty fleet-favourite Toyota Corolla has gone out to 21,750 customers.

Historically speaking, the Civic deserves to be higher in the sales standings. The nameplate has had a long time to establish itself as a key player. Here we’re testing the VTi-L variant to see what it brings to the segment. Prices start at $22,150 for the base model VTi-S manual, and go up to $31,090 for the flagship VTi-LN. As tested, the VTi-L starts from $26,990. (We also sampled the VTi-S auto for some background but we’ll focus on the VTi-L for this review.) 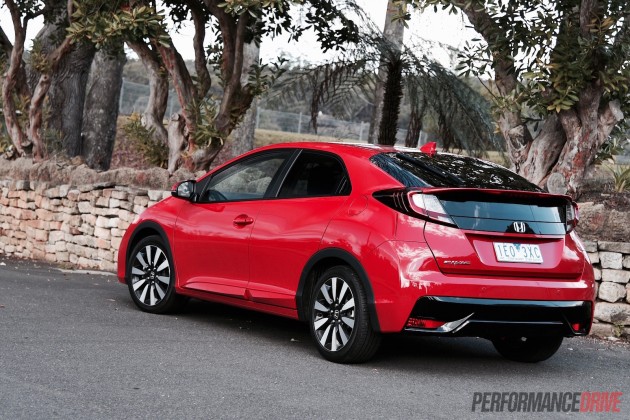 The 2015 hatch range certainly isn’t complicated. Each of the four variants are separated by staple component differences and minor luxury add-ons. For example, the base VTi-S gets 16-inch alloy wheels while the VTi-L and VTi-LN get 17-inch items. VTi-L buyers (and up) also get keyless entry and push-button start, parking senors, and automatic wipers and headlights.

Impressively, all variants come with a rear-view camera, cruise control, and a touch-screen interface. Going for the top VTi-LN gets you sat-nav and leather seats with heating functions for the front. Paying extra for the VTi-L/LN doesn’t get you all that much, but then again, the price differences aren’t that wide.

If there’s one overriding prerequisite for a compact hatch like the Civic, it’s practicality. Thankfully, the Civic shines in this regard and is one of the more user-friendly offerings. Honda’s 400-litre boot space will swallow up bulkier items without a problem, and the ‘Magic Seats’ in the back which fold down 60:40 or flip up to fit in taller items are a welcomed touch.

Visibility from the driver’s seat is good thanks to Honda’s different approach to cabin ergonomics. The digital speedo resides further forward on the dash in comparison to the traditional layout, and therefore eliminates the need for any protruding plastics above the steering wheel. There’s another screen to the left of the speedo which offers some infotainment and vehicle information, and adds to the Civic’s modern cabin layout.

The infotainment system has a very simple and user-friendly interface, offering Bluetooth, auxiliary and USB audio connections, as well as a decent six-speaker stereo system. Honda sound systems are usually quite good, and the same can be said here.

Sitting in the rear, the Civic hatch is comfortable enough for short to medium trips, and there’s no problem when it comes to head or legroom, even for taller passengers. The floor is flat with plenty of space to move your feet, and the clever seats allow you to store smaller items underneath the bench.

Whether the exterior design is your cup of tea or not remains subjective, but it is commendable of Honda in this day and age to continue to take an aesthetic chance and not be afraid to step outside the generic mould. The updated 2015 model features redesigned front and rear bumpers, side mouldings, and a new rear spoiler and racy diffuser section. Updated headlamps create an attractive front façade when approaching the car at night too, and around the back, the design, with the refresh, looks years ahead of some of the rivals.

In terms of areas that need attention, the Civic’s outward visibility is quite poor, apart from forward vision as mentioned. It can prove an inconvenience in some tighter city situations. Not only are the pillars wide and obtrusive, the rear spoiler acts like a permanent horizontal blind-spot. Is it worth the aerodynamic improvement – if any – on a vehicle of this nature? 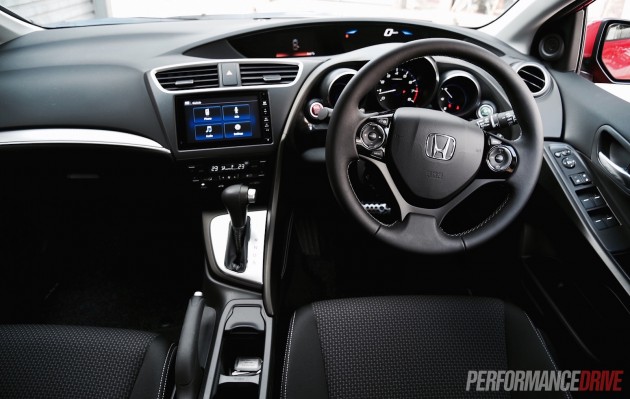 All Civic hatches in Australia come with a 1.8-litre four-cylinder producing 104kW of power at 6500rpm, and 174Nm of torque at 4300rpm. While the unit does feature VVT-i variable valve timing, it employs an older-style single overhead cam layout. The engine has been carried over from previous models reaching back to the Bronze Age. As a result of this dated design (at least partly), the figures are below average in comparison to the VTi-L-equivalent rivals. Peak outputs aren’t very broad either, whereas most competitors, especially turbocharged ones, offer a wide span of torque and less peaky power. This means there is limited zones of happiness for the engine.

All come with a five-speed auto except for the VTi-S which is available with a six-speed manual. Again, it’s the age of the transmission that seems to ruin the Civic’s chances of cutting above the crowd. There isn’t enough ratios to make use of the tight power and torque windows. As a result, acceleration is about as exciting as watching paint dry. We timed 0-100km/h in a yawning 10.5 seconds. We can hear you saying ‘this car is not designed for performance’, but at this point we’ll let you know the less powerful Toyota Corolla sedan – with a very ‘anti-performance’ CVT gearbox – achieves the sprint in 9.2 seconds. Even the previous-gen Mazda3 Neo automatic can do it below 9.0 seconds. As per usual with a naturally aspirated Honda engine, you really need to stretch out the revs right up to the 6500rpm redline to get the most out of it.

Despite its lack of power and acceleration, it is a fun and competent little hatch in most other facets of driving. When a corner appears, the Civic really claws back on performance. It demonstrates pure and enjoyable dynamics in the turns, with very nice electric-based steering and lots of feedback.

When really pushed, the Civic performs better than you might expect. Obviously there’s some bodyroll, and the initial turn in isn’t razor sharp, but if you want to throw the car in and accelerate mid-corner to explore the grip, you’ll be pleasantly surprised. Rear end stability is high for this type of vehicle as well, with the Sachs rear dampers and multi-link layout doing well to keep the back under control and sturdy over bumps. 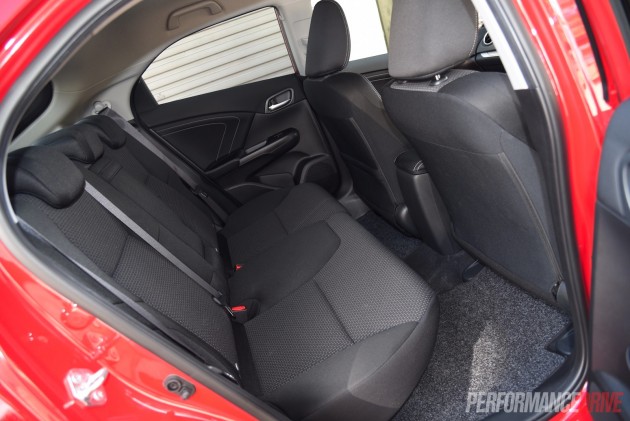 Honda has installed its new Agile Handling Assist System (AHAS) to all variants for 2015, which works in tandem with the stability control system. How it works is simple. Around corners the on-board computer dabs a little bit of brake to the inside wheel, effectively pivoting the car around. In practice, you don’t notice this system at all, but it gives the Civic a sense of confidence in the bends and impressive agility.

When navigating around the city the suspension offers a firm yet comfortable ride, and remains a supremely easy car to pilot around for a day’s worth of errands. That is until you encounter what is commonly known as a supercar’s worst enemy; the speed bump. Funnily enough, for a compact hatch, the Civic absolutely despises speed bumps just as much as its exotica brethren, and will scrape its front splitter consistently like clockwork, even in carparks and driveways. This is a major drawback as the Civic is meant to be an everyday car – as you may have argued above. It can be pretty damn embarrassing pulling into carparks if there are people around to witness.

Aside from being old, the five-speed automatic transmission, which offers gear changes via steering wheel-mounted paddles, works well in both menial and mental driving moods, offering relatively quick and smooth shifts. The paddles, while they may seem a bit gimmicky on a car of this sort, are a welcome addition when pushing the Civic. They give it much more of a sporting pedigree in comparison to rivals like the Toyota Corolla and Holden Cruze.

Lastly and perhaps most importantly for this type of vehicle, the Civic features an Econ button. When activated, it makes the car as unresponsive, doughey and slow as possible. However, the fuel savings in return can be well worth it. The Civic proved frugal indeed for us. We returned figures just a smidge (6.8L/100km) over the claimed 6.6L/100km figure while cruising around town in Eco mode. Switch it off and it will still return a respectable low-7.0L/100km figure.

Should the Civic be a catalyst for increasing Honda’s sales? It’s difficult to say as the competition is really, really tough at the moment. Many of the rivals present everything that customers are demanding. The Civic undoubtedly remains a practical and economical vehicle though. And it’s still one of the more enjoyable humdrum hatches in terms of handling and steering.

We do have a soft spot for Honda. Deep down, we all do. We all know the company can offer extraordinary products, like the range of Type Rs, the NSXs, and the S600 and S2000. If the dated items here were reinvigorated, the Civic would be a much more convincing proposition we think. 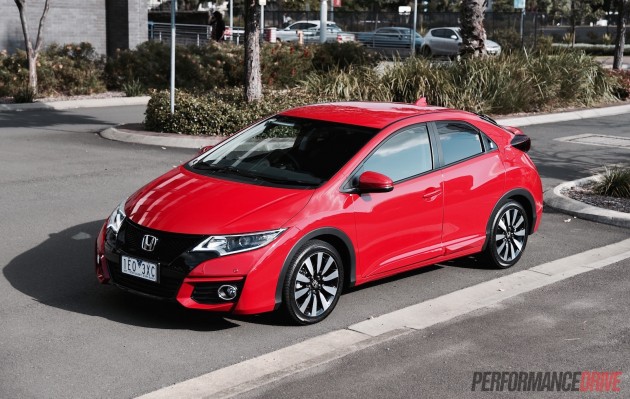