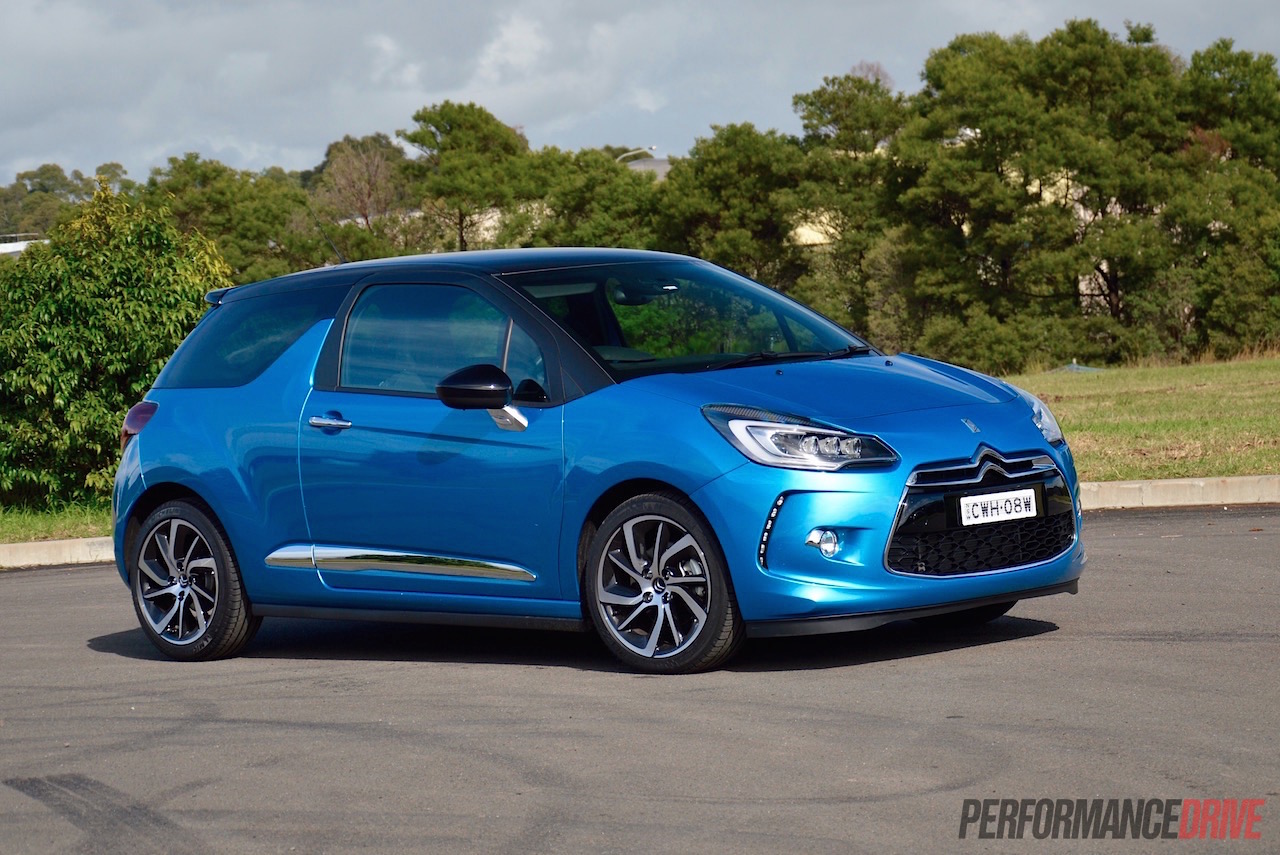 For as long as we can remember, the Citroen DS 3 has always been a funky and quite appealing sporty hatch, but it has failed to inspire Australian buyers. During 2014, the local arm sold just 134 examples, which doesn’t compare well to the MINI Cooper (1668), or even the Peugeot 208 brother that shares the same underpinnings (857). 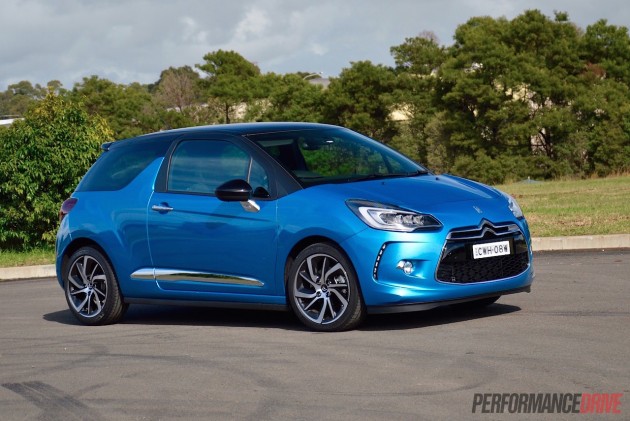 For the 2015 model, Citroen has packed in lots more value and equipped it with a sporty new 1.6 turbo engine. Will this be enough to win more hearts?

There’s just two variants available in Australia, both are ‘DSport’ grade with the only difference being a hatch body style and a cabriolet. Unfortunately for automatic buyers, there is only a six-speed manual on offer at this point.

Under the bonnet sits PSA’s latest 1.6-litre turbocharged, Euro-6-compliant four-cylinder engine. When squeezed, it kicks out 121kW of power and 240Nm of torque. It’s not quite enough oomph to put it into hot hatch territory, but it will energetically chirp its way through lower gears as it scrambles for grip with its front-wheel drive system.

Prices have increased from last year’s model to $33,990 for the 2015 hatch, and $36,590 for the cabrio (excluding on-roads). It fights in the market against the likes of the more expensive MINI Cooper S, the similarly priced Abarth-tuned Fiat 500 595, and the cheaper yet more potent Ford Fiesta ST. 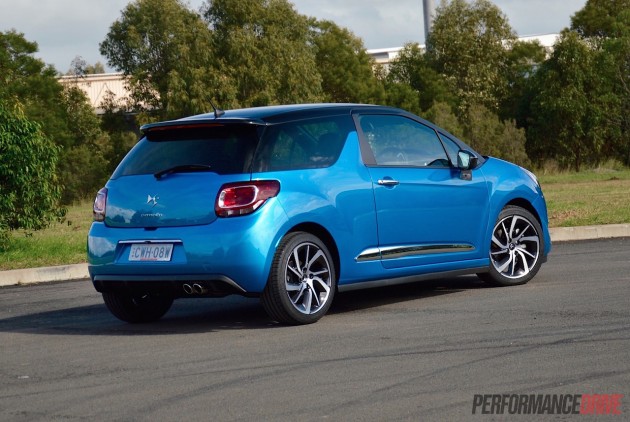 You have to give credit to Citroen for its exterior design. It looks retro but in a cool modern way. From the complex multi-layer taillights with their own ‘DS’ symbols, to the intricately-placed LEDs in the front end, to the black roof and C-pillar combination, it’s obvious Citroen has some proper in-house decorators to assist the designers.

The same can be said for the interior. We love the sporty bucket seats which are covered in a robust, textured fabric. Finding that perfect driving position does take a while, partly because of the awkwardly-placed levers and knobs that you have to twist and pull, and partly because that’s just the way French and Italian cars are. Even when you think you have the position right, it just never is. The steering column offers limited adjustment and the seat feels like it’s mounted on stilts. The pedals are also very small – it’s like Citroen thinks everyone is a ballet dancer. Fortunately, you do get used to it.

Seating space is more than acceptable for this class of vehicle. Front seat passengers are offered ample legroom and headroom, with a free and airy atmosphere thanks to a low centre console and cleverly-packaged, well-forward dash. Some of the in-car controls and buttons are a bit confusing, such as the steering column stalks that control the cruise control and radio, and there is a lack of storage space for your nicknacks. A decent cup holder or two wouldn’t go astray either.

Rear seat riders won’t feel like they are in paradise but the ceiling is high and the lower half of the bench is deep to support your under-thighs. If you have an NBA basketball player in the front, rear legroom really only exists in the imagination of the poor passenger sitting behind. But, if you’re willing to move the fronts forward there is just as much if not more room that what is offered in the European rivals.

Around the cabin is an interesting set of details and trimmings. Citroen has gone for the fake carbon fibre for parts of the dash. Ordinarily, this is as off-putting and unfashionable as wearing black leather dress shoes and white socks. But, like Michael Jackson, the DS 3 proves it can look good if it’s done well. The carbon look meshes in nicely with the selection of grey tones around the cabin. And let’s not forget this isn’t a proper hot hatch where you might expect ‘real’ carbon fibre; it is simply a sporty hatch.

Sitting centre stage on the artistic dash is an LCD screen to display various on-board controls. It presents good, clear graphics and it is relatively easy to use. However, it doesn’t offer full touch-screen functionality, oddly. You need to use the various buttons on the dash as well as the steering column stalks, as mentioned, to navigate your way through it. You do get some impressive kit as standard though, like sat-nav, a powerful seven-speaker stereo with a sub-woofer, cruise control, and a reversing camera. 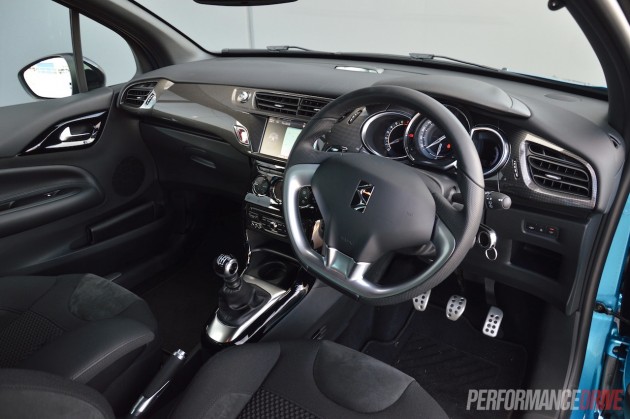 Now for the exciting part. We were genuinely excited about taking this little Frenchy for a spin. If any country in the world knows how to make a small hatchback, it’s the French (and Italians). They have decades of experience, and, in most cases, they certainly know how to make a sporty one.

We can positively confirm the eager DS is an invigorating drive. It is one of those cars that makes you feel young again. Through the steering, despite not being ideally positioned in your hands, it is like you’ve been given a packet of enjoyment. You can feel the front wheels and the Michelin tyres biting and tugging on the tarmac, and you can pinpoint exactly where you want the front end to go. Even swinging around roundabouts on your way to work is fun – you’re often the only one actually smiling on the Monday morning commute.

The engine ambitiously and successfully finds a sweet spot with any gear that you’re in, and at most sections of the rev range. There is some turbo-lag if you go hunting for it, but the boost is gentle and means well. There is impressive mid-range too. Accelerating hard through the gears will put a grin on your face, with the burbling and bubbly engine roaring away (it would sound great with an aftermarket exhaust). We timed 0-100km/h in 7.2 seconds, which is not bad for a ‘warm’ hatch.

Aside from the sportiness, the DSport is a friendly and welcoming car to drive. Vision is great in most directions, the clutch is feather-light, and the steering and throttle sensitivity is delicate without being overly touchy or fidgety. It’s also very fuel efficient – we averaged around 7.6L/100km and the official ADR average is a low 5.6L/100km. In other words, it’s the perfect blend of sportiness and practicality to liven up your daily driving errands. 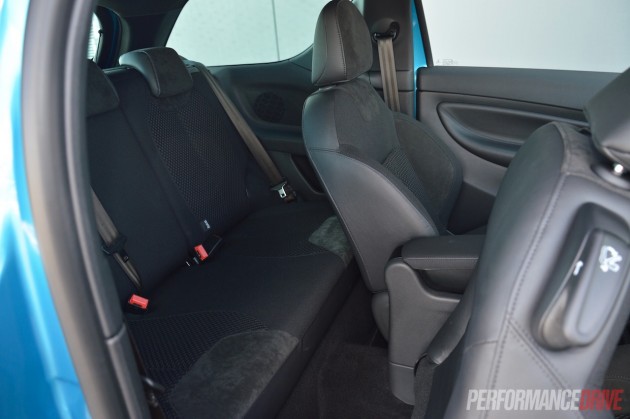 The DS 3 DSport is a charming and endearing little hatch. It handles superbly and it goes like a lit bunger when you put your foot down. If only Citroen would fine-tune the seating position and some of the controls to make it more practical. Even so, we see no reason why this shouldn’t be one of Australia’s favourite Euro compact hatches.