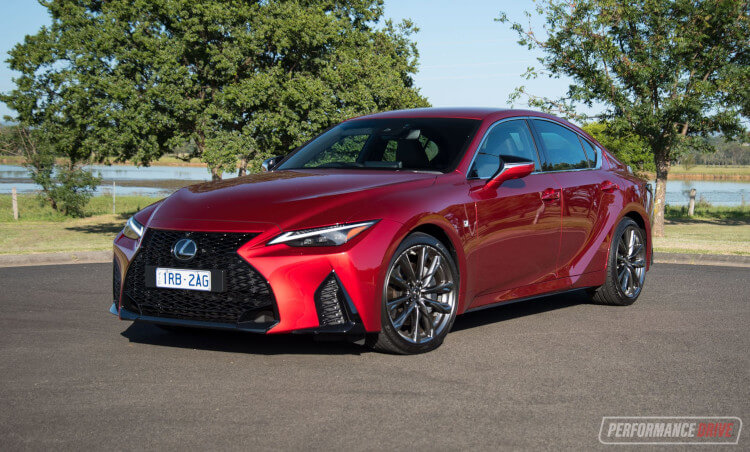 Although the 2021 update for the Lexus IS sedan is not an all-new refresh, it does evolve what has always been a sharp and sporty package. Here we’re checking out the flagship engine offered in Australia, called the 350, which is only available in F Sport trim.

The new model is available with either a 2.0-litre turbo four-cylinder, called the 300, and a 2.5-litre four-cylinder hybrid, called the 300h. At the top of the lot is the 3.5-litre V6 petrol. Power outputs span from 180kW, 164kW, and 232kW, respectively. As before, all models are rear-wheel drive in Australia. 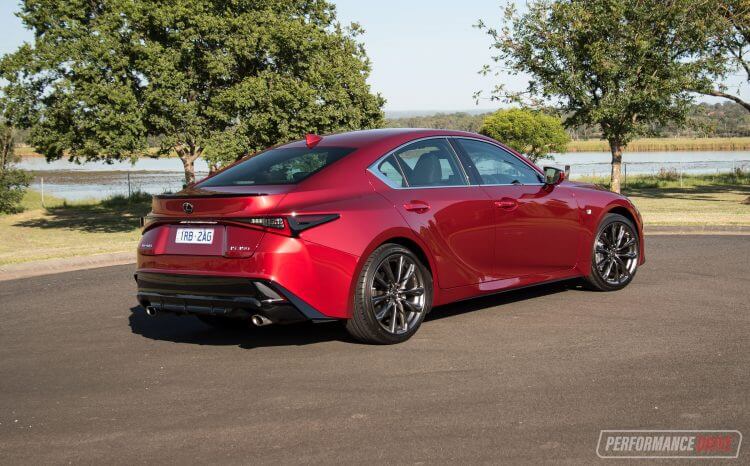 Firstly, we have to proclaim, the new model not only looks better than ever but we think it is one of the most striking and alluring designs of the class. It really captures your attention, with its distinctive sharp edges and sophisticated details. It almost looks like it was carved from a solid block using nothing but a samurai sword. And all in a well-proportioned and precise kind of way.

The black garnishes around the body for the F Sport, the cool tinted taillights and headlights, and the muscular rear wheel arches really set it apart from the rivals. We especially love the view at the back. The new full-width taillight accentuates the sense of width, and the black lip spoiler tops it off perfectly.

The F Sport also comes standard with adaptive dampers for optimum driving versatility, as well as a set of staggered 19-inch alloy wheels measuring 8.5 inches wide on the front and 9.5 on the back. Finished in dark grey, they also help assist with the lusty, sporty look. These wear Dunlop SP Sport Maxx tyres measuring 235/40 on the front and 265/35 on the back. That’s up from 225 and 255 on the old model. 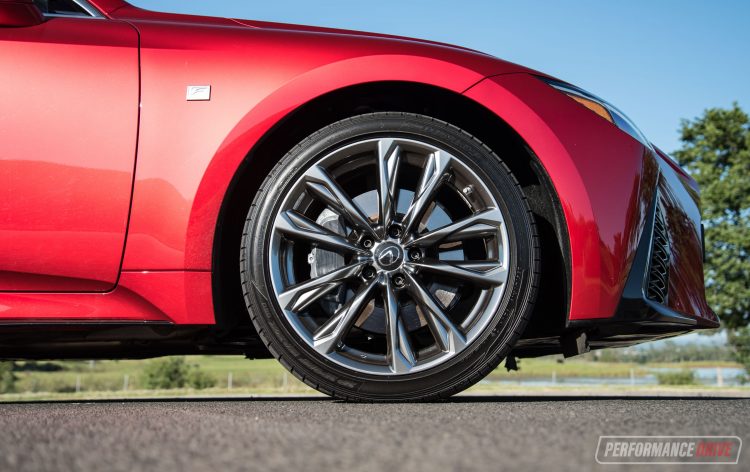 All variants feature 334mm front and 297mm (down from 310mm) rear disc brakes. Previously, the F Sport received the 334mm fronts while other variants had 296mm. In that sense it is a bit disappointing that Lexus hasn’t equipped the new F Sport with uprated brakes compared with the lesser variants, even mildly bespoke items, but on the other hand it is good that those lesser variants step up to the superior setup.

The interior is not all that different from before. One of the biggest changes is a new 10.3-inch multimedia screen on the dash, now with touch functionality. This means you don’t have to use Lexus’s fiddly and cumbersome touch pad controller, which, unfortunately, is not an improvement over the old joystick-style controller. Lexus must have initially spent big bucks on developing this touch pad system as it keeps popping up in new models, despite its awfulness. As we’ve said before, it is clever and interesting, but in practical terms, especially trying to use it while you’re driving, it is just too distracting for a motor vehicle.

The screen is packed with Android Auto and Apple CarPlay, a sharp surround-view parking camera system, digital radio, and is wired up to a 10-speaker sound system. As mentioned, the Enhancement Pack enhances the latter, stepping up to a 17-speaker unit. 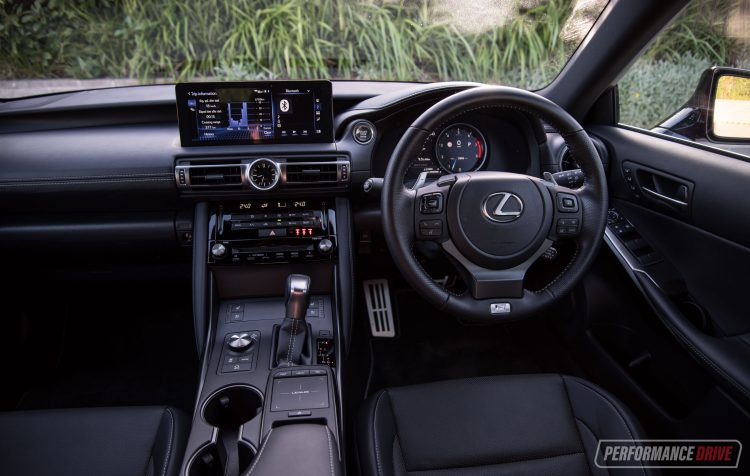 It is a pretty tight and intimate cabin compared with some rivals, however, with hip-hugging sports seats in the F Sport and a great little sports steering wheel this is an awesome driver’s cockpit. You can sit quite low and hunkered down if you want to, and the steering wheel falls perfectly at your chest. You’ll find a wide range of adjustment available as well so it should be suitable for most shapes and sizes.

Rear passengers are presented with moderate legroom and headroom compared with the key rivals. As is the case with many cars in this class, the driveline tunnel saps a lot of middle seat space. Legroom, in particular, is pretty tight though even for the outer passengers. There are climate vents in the back of the main console and flip-out cup holders from the centre arm rest, but there are no bottle holders in the doors. 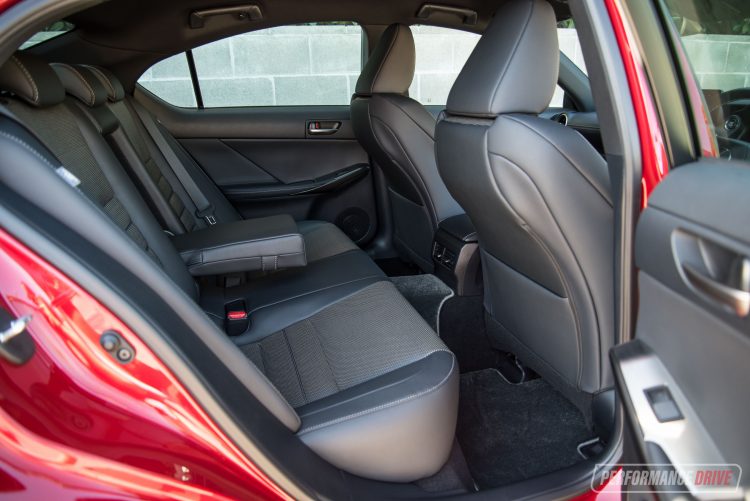 With 480 litres of boot volume, the 2021 Lexus IS meets the class standards. It’s a handy space and totally practical for everyday use. You don’t need an SUV, in other words. Being a Lexus, you’ll find some branded roadside equipment and first-aid kit included in the boot.

Of course we would love to see Lexus’s new 3.5 twin-turbo V6 in here, producing 310kW and 600Nm like in the LS 500. But that might be reserved for the next-gen IS, expected in a few years. For now, the smooth and silky Toyota ‘2GR’ naturally aspirated V6 carries over from before. It’s a relatively high-tech unit, featuring D-4S (direct and port) injection, simulated on-demand Atkinson running cycle, and a high compression ratio of 11.8:1. Fuel consumption has been improved from 9.7L/100km in the previous model to 9.5L/100km on the official combined cycle – we averaged 10.2L/100km during our week in mixed conditions.

On its own, we think this is a fantastic engine. It loves to rev and it gives off a throaty and deep roaring soundtrack. Peak outputs are also impressive for a naturally aspirated unit, especially considering this isn’t a specific performance engine. However, in today’s market, where almost every engine is assisted by some kind of forced induction and/or mild-hybrid technology, this V6 can seem a bit old hat now. 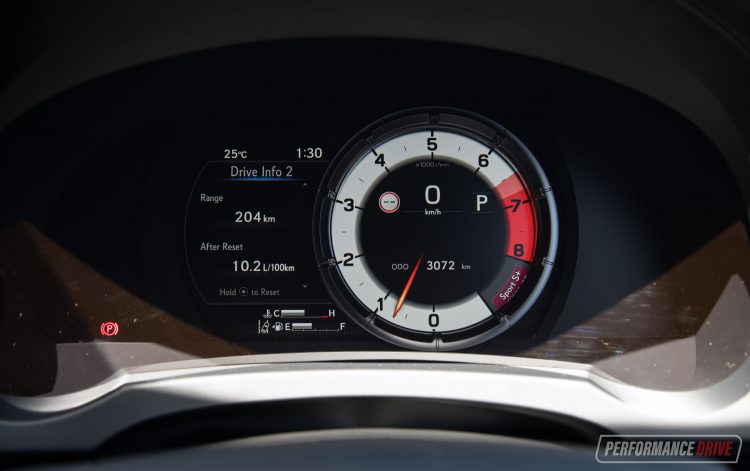 For example, peak torque isn’t available until 4800rpm and it’s held only until 4900rpm. Lexus says up to 210kW is achieved with just 2100rpm however, which is very decent. Out on the road the engine demonstrates what the on-paper specs portray; if you want to move quickly, you need to put you boot into it. You’ll definitely enjoy the aggressive roar, but at times it would be nice to have more low-end grunt. For example, during overtaking. Subtle manoeuvres are not really possible. It needs to scream and shout if you want to achieve a pass swiftly, whereas in most of the competition, including rivals with less power and torque, they perform such duties with less effort.

Flat-out performance is respectable, though. We don’t mean to completely discount this engine’s potential. And we get that this is a Lexus, which is to say, primarily, a luxury-focused vehicle. The long-legged gearing from the eight-speed auto, and tall 3.13:1 final drive, seems to drag things out a bit. Using our Racelogic Vbox Sport on a private road we saw 0-100km/h come up in as low as 7.00 seconds, using a brake-hold method. Being naturally aspirated, the initial response is impressive, with 0-100km/h taking 7.11 seconds without building the revs on the brake. 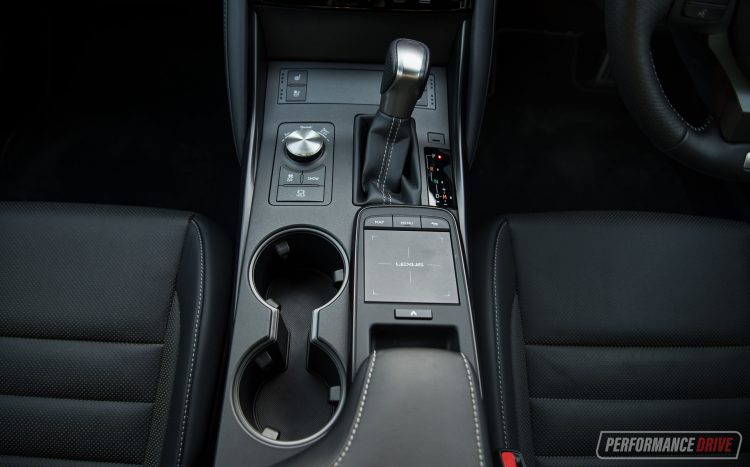 The ‘AA81E’ eight-speed auto, which is an Aisin-Warner unit (Toyota owns Aisin), offers gentle upshifts and seamless downshifts. Flick it into Sport Plus mode and the gearbox will resist upshifting until higher in the rev range, with downshifts accompanied by a satisfying throttle-blip rev-matching function. You can engage with the paddle shifters for a more interactive experience, too.

Along a winding mountain road it can be a lot of fun to click through the gears and relish in the V6’s serenade, and explore and even hunt for the optimum output ranges. In this scenario, we feel it is most enjoyable to remain in the lower gears, such as second, third and sometimes fourth, depending on the conditions. Again though, the engine’s peaky character does mean you often desire more oomph going up long steep hills.

Also supporting its sporty driving potential is the handling. Lexus has made various revisions to the existing chassis, mainly to increase rigidity. Additional spot welds and laser-screw welding has been applied, along with more hot-stamped high-tensile steel and aluminium employed in the architecture. Despite the increase strength, which translates to improved agility and response, Lexus says the IS 350 F Sport also benefits from a 30kg weight reduction. According to the specs, this example has a tare weight of 1655kg, which is not particularly light for this class; it’s not the heaviest, but it’s not the lightest. 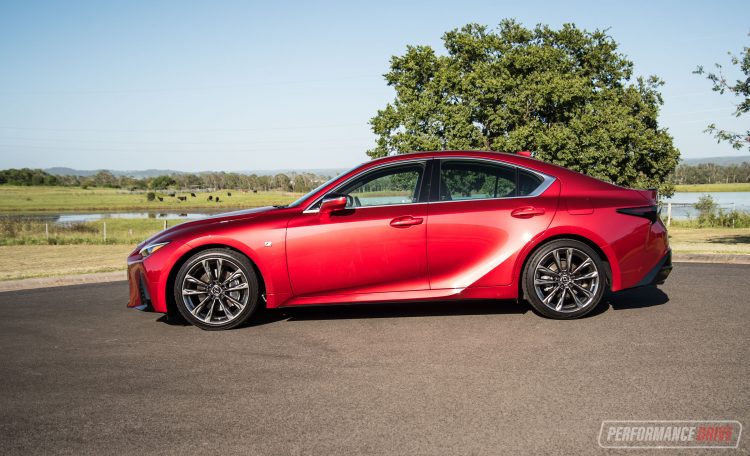 Through the steering wheel there is a clear weighted and planted feel. It’s solid on the road, and seems like it would never become unstuck. This means you can carry plenty of pace around corners, with confidence. There is a good level of feedback through the steering as well, although it can seem quite distant, in a luxurious kind of way. It’s almost like the steering is engineered to filter out undesirable kickbacks. As such, around town it is super-smooth and just glides around.

Overall, the drive experience seems skewed toward luxury than outright sportiness. The V6 and eight-speed auto almost feel contradictory, in that, the engine performs best at high revs while the gears and diff ratio are tall and better for the highway. Obviously this is not a sports sedan, but we feel like the powertrain could be punchier to support fun driving stints, and to better coincide with the F Sport badge. On the other hand, the powertrain is wonderfully relaxing and quiet out on the highway, with outstanding stability from the chassis and suspension. The ride is also very comfortable, especially compared with some sport-focused rivals. 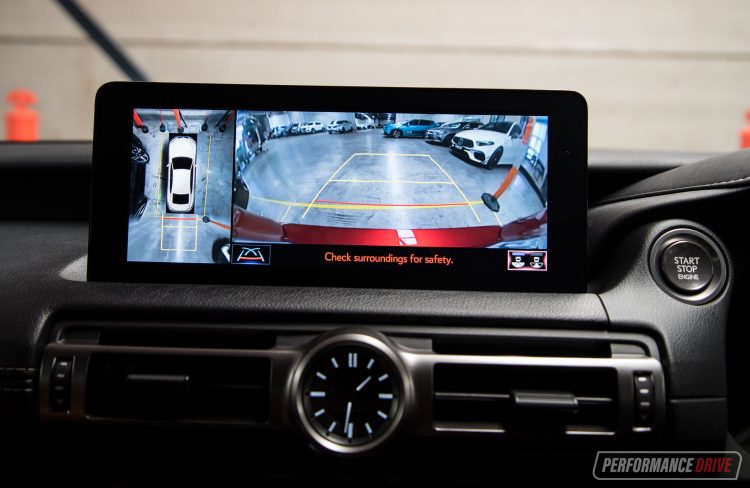 It’s nice to dream about Lexus’s recent 3.5-litre twin-turbo V6 as a possible candidate for the next-generation model. But for now, we should probably enjoy this raw, naturally aspirated V6 while it lasts. We simply adore the edgy and aggressive styling of the new exterior, which really sets it apart from the conservative German competitors, while Lexus’s unrivalled reliability and after-sales care should never be discounted or taken for granted. It’s all a winning combo but one that perhaps longs for a younger and more advanced successor.