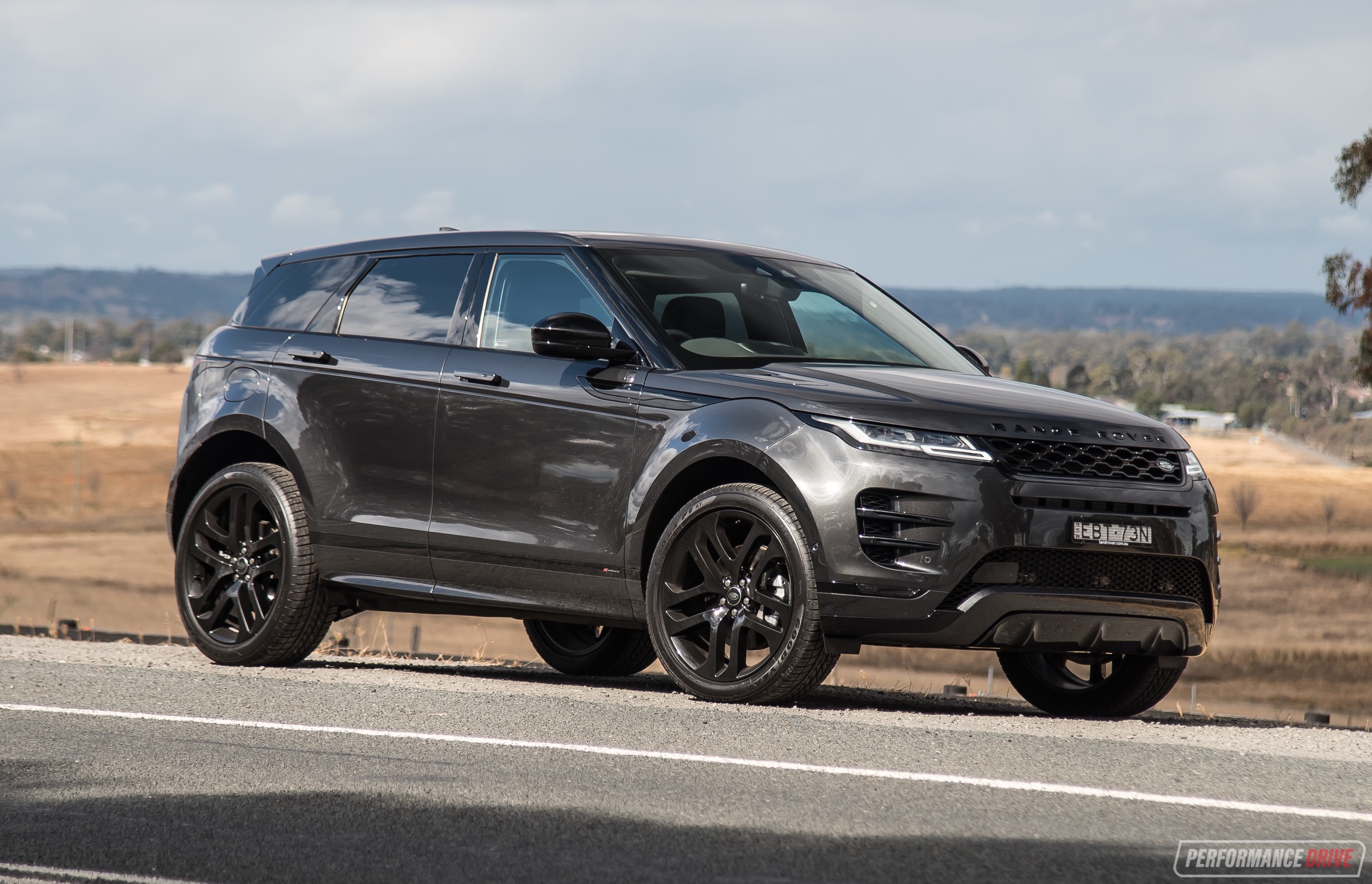 You could argue that, due to popular demand, Land Rover products have become more about a bold fashion statement than building on the brand’s extensive military and humanitarian focused heritage. If that’s the case, it should come as no surprise the 2020 Range Rover Evoque has been designed to be swankier than ever. 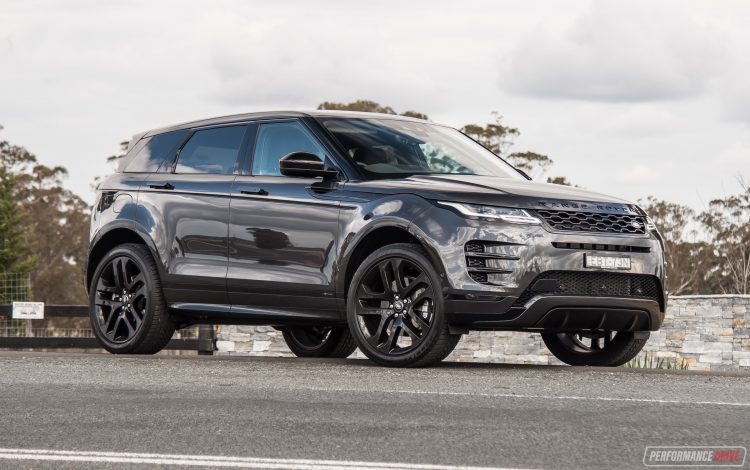 There’s an enormous range of variants available in Australia for the ultra-modern mid-sized SUV. You can opt for no less than six four-cylinder engines; 110kW/380Nm, 132kW/430Nm and 177kW/500Nm turbo-diesels, and 147kW/320Nm, 183kW/365Nm and 221kW/400Nm turbo-petrol engines. All come with constant all-wheel drive and a nine-speed auto gearbox.

Further than that, you can choose from S, SE, and HSE trim levels, and add the R-Dynamic pack to each of these. As you can probably imagine, the possible combinations available is mind-blowing. In fact, there are 26 different main variants, excluding special options and enhancement packs. This makes it one of the most exclusive SUVs in the class. 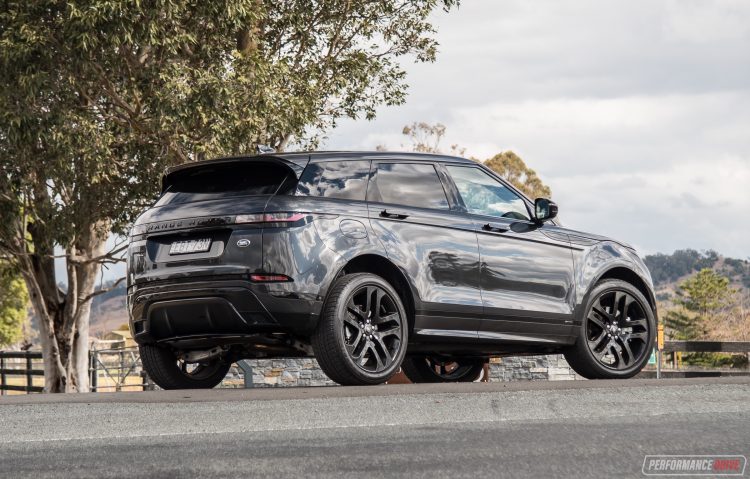 Land Rover has been most successful in designing top class SUVs that greatly differ from the design of others on the market. The Evoque’s most notable trademarks are in the high-waisted rear with small and high-sitting windows, and the outer shell and bumpers that are seamlessly curved into the panels. When you see the Evoque passing on the streets, it is unmissable and unmistakably a modern Land Rover.

Interior-wise, the cabin is top-shelf luxury. It goes for that neat, linear, but prestige layout. And the materials and surfaces also feel very high in quality. This test model is fitted with optional blue suede-cloth headlining that looks as classy as a premium cinema, with blue and black leather seats. We always thought black and blue was a no-no in the fashion industry? Obviously Land Rover is bold enough to set new trends. 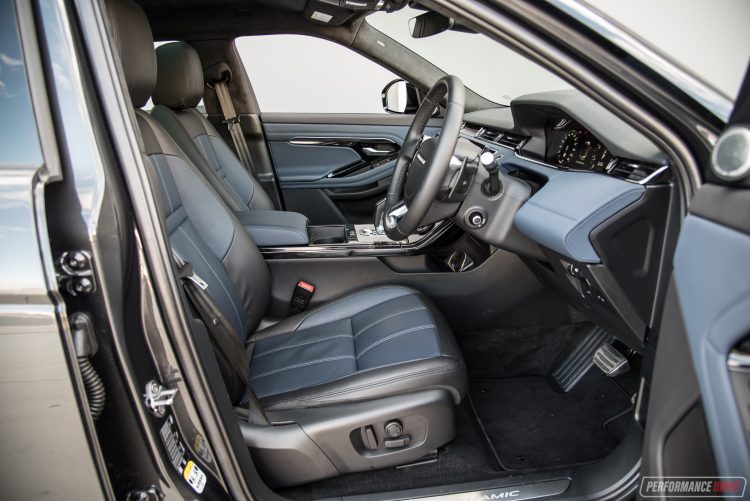 The 2020 Evoque introduces the new second touch-screen to control the air-conditioning settings and some car settings, similar to what’s seen in the slightly larger but same segment Velar. It blasts the Evoque to the height of ritzy with its looks. Using it takes some getting used to, as you need to draw your eyes down below as you can no longer feel for a physical button or knob while driving. The crispness of the graphics and the way the tech is elegantly integrated within the console design is beautiful, however.

If you’re sitting in the front or second row, the interior feels spacious. And it goes without saying that the seats feel as comfortable as seats come. Yet, they are still firm enough to provide leaning support during cornering. If you like your seating position high, the Evoque ticks that box. As we saw in our recent review of the Discovery, the steering wheel has been redesigned to include glossy black buttons that all link together like a mini touch-screen. 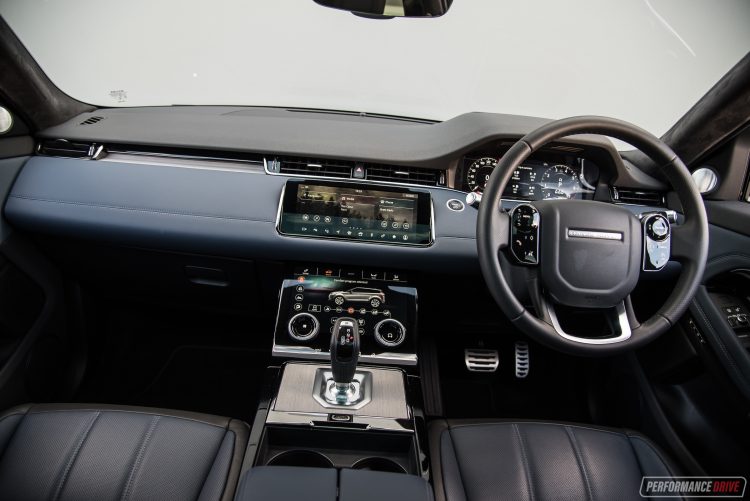 We found it tricky to feel where you need to press without looking down at the steering wheel, but this would obviously change after some ownership experience. The buttons also change into different commands according to which menu you’re in. This is a fancy new feature not before seen on the Evoque (although borrowed from higher models in the showroom). Like in any modern vehicle, it’s worth playing with first to understand it before driving.

Adding to the poshness are door handles that electronically disappear flush into the door skins when locked and when driving. They magically pop out when the car senses that the key fob is near. Again, this is borrowed from its big brother, the Velar. 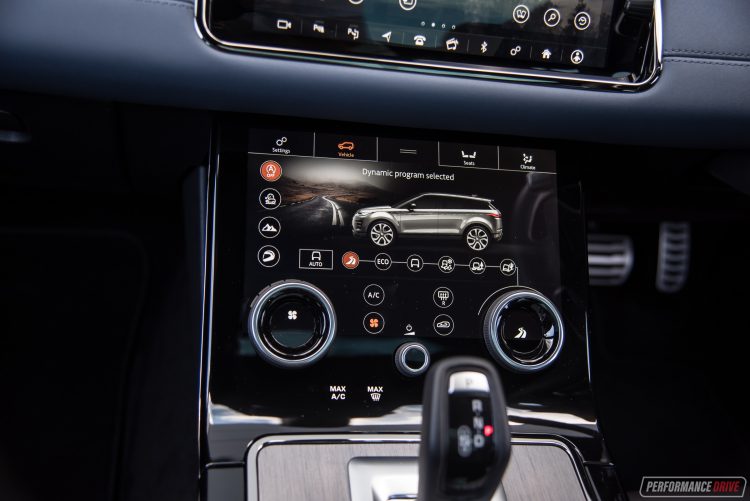 Touch Pro Duo is the latest multimedia system from Land Rover, and it comes as standard on the SE and HSE. It includes a 10-inch touch-screen mentioned above to control the climate and vehicle settings, and another 10-inch touch-screen above that which supports dual menus, digital television capability, along with Wi-Fi and satellite navigation. Standardly, you get a 10-speaker sound system, or you can option for a magnificent 14-speaker Meridian surround sound unit.

Boot space is commendable for a mid-sized SUV, and 10 per cent larger than the previous model. It measures in at 591 litres with all five seats in place, and 1383 litres with the rear seats folded down. In comparison, the Audi Q5 is slightly smaller at 550 litres, but 1550 litres with the rear seats folded down. Accessing the space is made easy thanks to a powered tailgate, standard on the SE. The HSE adds gesture control as well ($170 option for this SE). A space-saver spare sits below the boot floor. 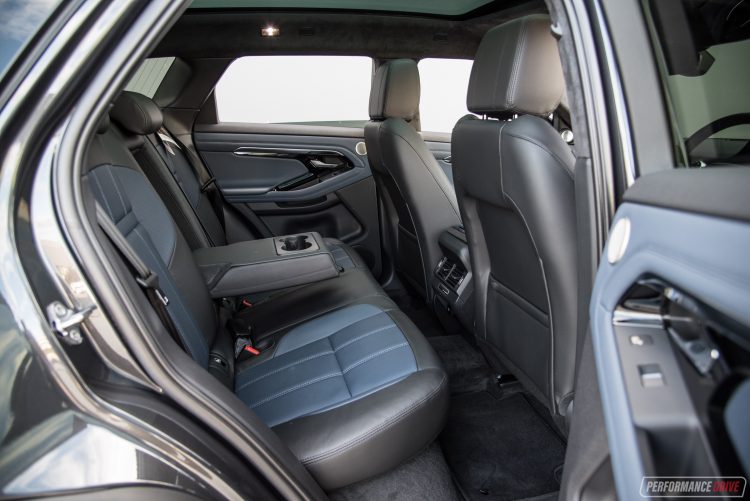 In terms of standard equipment and features, going for the SE or HSE is the best way to enjoy a whole bunch of the fundamental luxuries and conveniences. Going for the base models might seem attractive purely from the perspective of the lower starting price, but watch out for the options list. It is easy to send the total price northwards very quickly.

Land Rover offers a three-year/100,000km warranty for its vehicles, which is now below standard for the local industry. However, it is still on par for the premium sector. The manufacturer also offers fixed-price servicing plans. 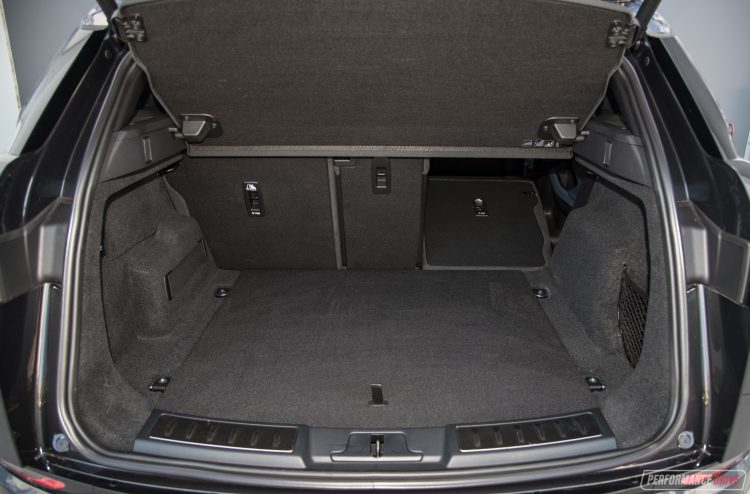 The P300 engine is a four-pot rocket. 221kW and 400Nm from a 2.0-litre single-turbo petrol is outstanding – this kind of setup is usually seen in the most serious of hot hatches. It can make the Evoque move with urgency and punch. And that torque is accessible in full from a low 1500rpm – similar to the characteristics of a strong turbo-diesel engine.

Although being a moderately heavy 1808kg (tare), the engine never feels like it is struggling. The only pitfall with all that power is in its (eventual) delivery. It might be from the throttle response programming, turbo-lag, or the nine-speed auto, or a combination of all. We can’t quite put our finger on it.

For example, if you’re cruising and have a sudden need to speed up and you push the throttle, the engine tends to have an initial delay, until it wakes up and releases its power. Or, if you’re approaching a corner, even at normal speeds, and start accelerating half way around, there is a noticeable lag as the powertrain lines up the right gear and power delivery to pull you away from the corner. 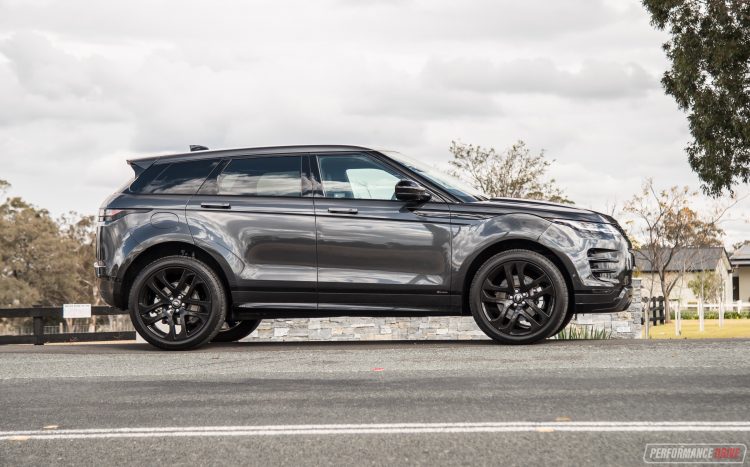 Nonetheless, the Evoque P300 performs the all-important 0-100km/h sprint in an impressive 6.6 seconds according to Land Rover. Our testing with a Racelogic Vbox Sport revealed 7.02 seconds. This isn’t slow, by any means. But with 221kW, all-wheel drive and a weight of 1800kg, it should, theoretically, be able to do it a bit quicker than this.

Obviously the Evoque isn’t designed purely for acceleration and speed. This is an SUV after all, and an acclaimed off-roader at that. We suspect the gear ratios and the calibration of the torque convertor have both been developed to cater more for serious off-road conditions as opposed to outright performance sprints. Which is a good thing, especially if you’re after a genuine off-road-capable premium SUV. 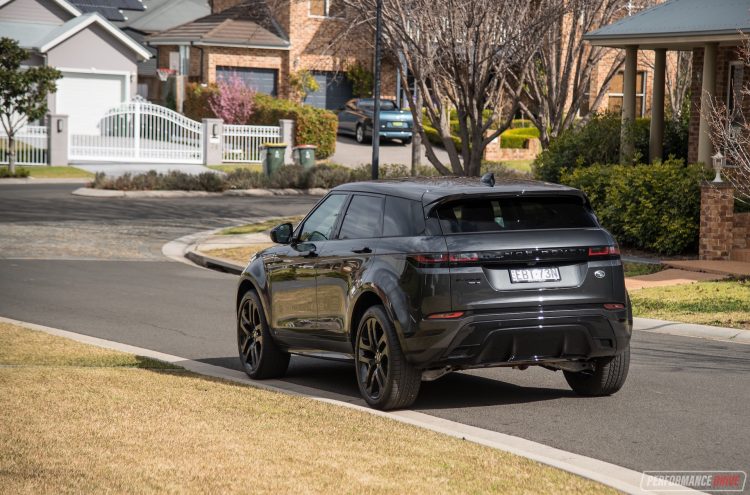 In a world where fuel economy and reduced emissions are paramount, there are an array of fuel-saving technologies coming through the market. Some of which impede on the drivability of the car in our opinion. The 2020 Evoque, for example, introduces mild-hybrid technology with a belt-integrated starter generator, and an electric battery mounted under the floor storing power during deceleration. With this there is an advanced stop-start system whereby the engine shuts off before you come to a complete halt (roughly 30km/h). In short, we find it intrusive and annoying.

Inching through traffic queues it often switches on and off many times. Taking off can seem very delayed by the time the engine restarts, and even more so when you add in the powertrain slack/turbo-lag . Despite these efforts, the fuel economy remains high with the new tech. Our best average reading was 10.0L/100km, and the official average is 8.2L/100km on the combined cycle. In our view this is not good enough for a 2020 vehicle that offers this level of performance. Again, we think some of the equipment and tuning which has been directed at optimising off-road performance may play a role here. 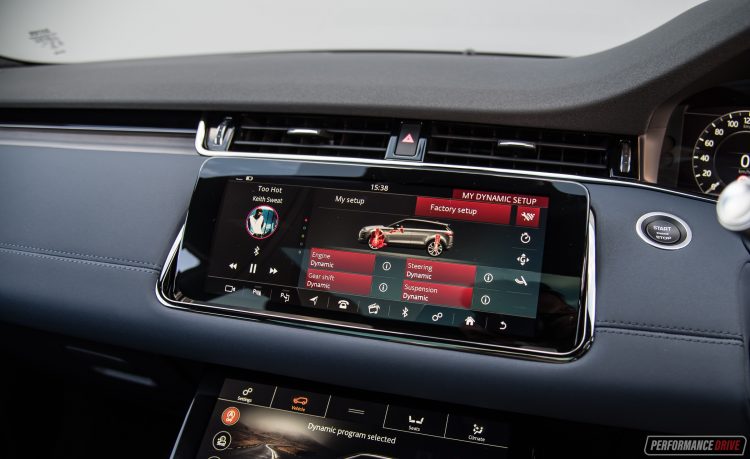 Unlike some SUVs in this market space, the Evoque doesn’t have a raving towing capacity. 1800kg braked is 200kg lower than the 2.0T Audi Q5 and 2.0T BMW X3, for example. However, the 210mm ground clearance, 22.2-degree approach angle and 30.6-degree departure angle, as well as a 600mm water wading depth, put it ahead of its main rivals.

This means it should venture further off the beaten track than any other. And there are a host of driving modes and assistance systems to get you through some really rough stuff. We weren’t game enough to put it all to the test, mainly because the optional 21-inch alloy wheels looked too good to risk. But we have previously tested an Evoque off road and it performed much better than most of the competition.

Back on the tar and the Evoque exerts great handling and dynamics. It has a new Integral Link rear and MacPherson Hydrobush front suspension that has enhanced the ride and comfort levels. Through corners, it feels positively stable and displays trifling body roll. The steering is a bit light for us, which means you don’t feel as in touch with the road ahead as some rivals. But overall we have no complaints about the cornering capability or grip levels. It is a joy to drive down a fun road. 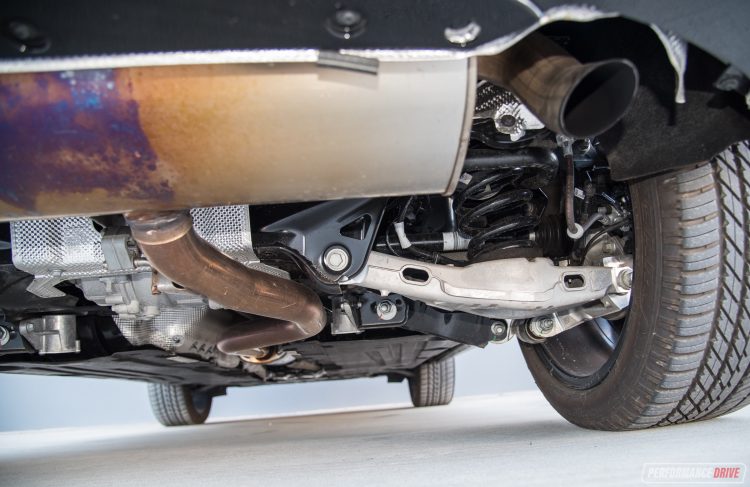 The 2020 Range Rover Evoque is a showy mid-sized SUV that differentiates itself well away from the competition with exquisite design and style; inside and out. We love the stunning dual touch-screens inside, and the luxurious suede trimming option, too. Undoubtedly, off-road credentials place it above all of the key rivals, except perhaps the Velar which is available with adjustable air suspension.

The P300 is a ripper of an engine with above average outputs, but it is let down by a confused nine-speed auto and clunky stop/start system. The fuel consumption is also slightly above average. In the long run, the diesel options might be the pick if you’re after pure economy. But if you live in the city and only travel short distances, we’d recommend going for any of the petrol units.

PROS:
– Top-shelf luxury inside
– P300 engine offers class-leading power for a 2.0T
– Very classy dash and integrated technology
– Lots of personalisation options to create something really exclusive
– Off-road performance topples much of the class
– Another beautiful design from JLR