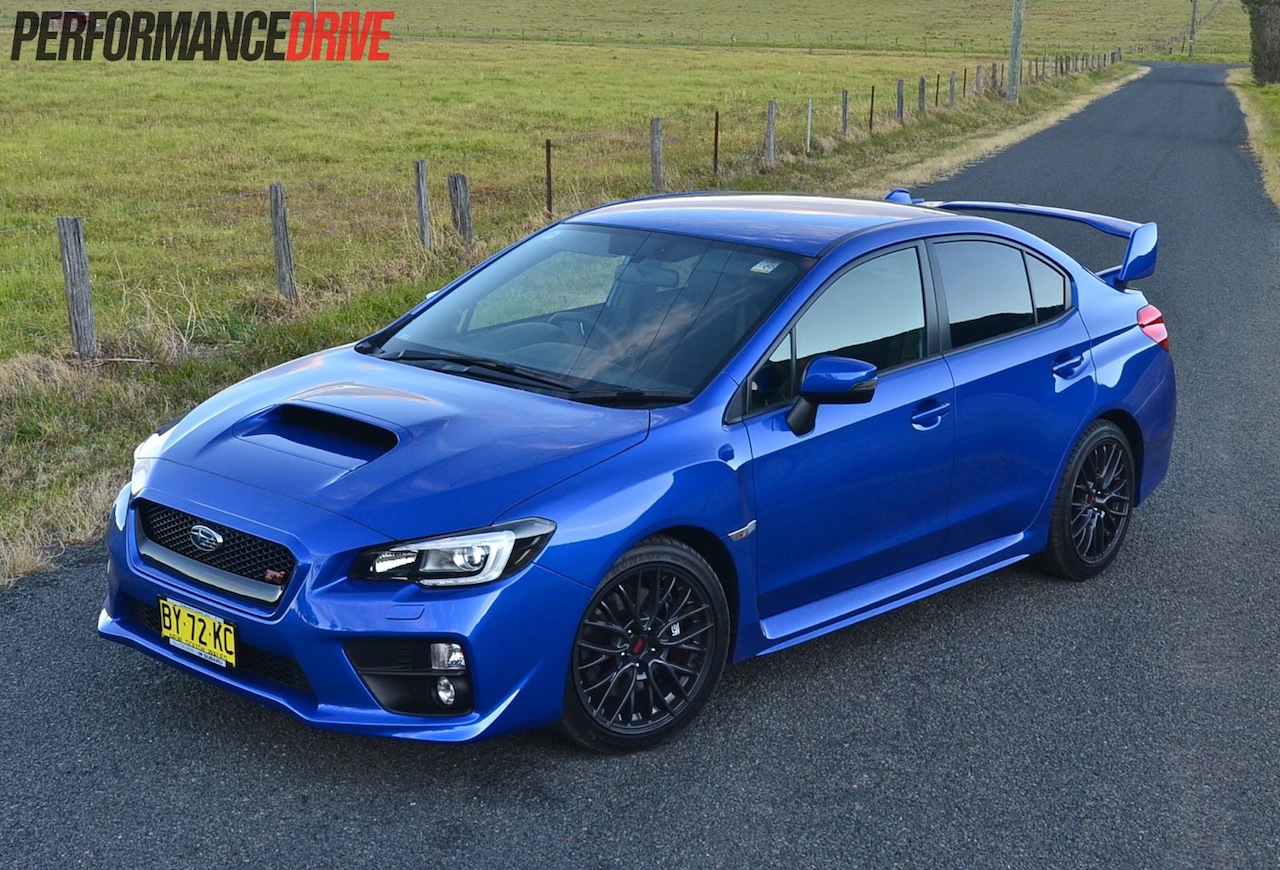 In terms of affordable grip-and-go performance cars, the 2014 Subaru WRX STI is definitely one of the most attractive propositions currently on the market. Featuring an all-new body but carrying basically the same engine and drivetrain from the previous model, one might think Subaru has failed to invest in the STI’s evolution. That’s what we’re here to clarify for you. 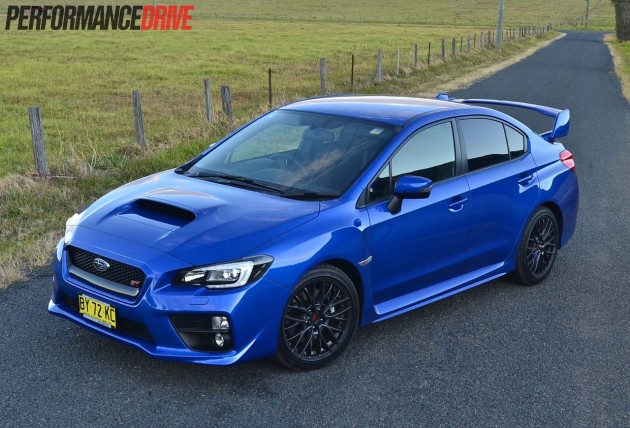 Output for the turbocharged 2.5-litre boxer four-cylinder is rated at 221kW and 407Nm. All WRX STIs come with a six-speed manual transmission with no option of an automatic. Like the previous model, the drivetrain uses a mix of mechanical diff and computer trickery to get maximum grip from the surface below, however, the new model features torque vectoring for even more cornering prowess – more on that below. 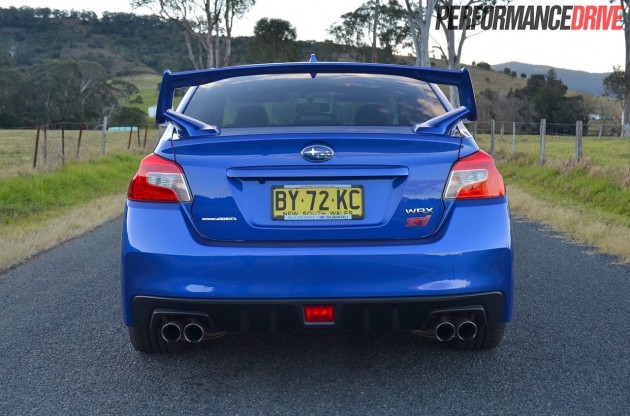 The new range of Rexes have stepped away from the overly plasticised look of the old cabin and now feature a fresh interior and dash design that’s easier on the eye and nicer to touch. The dash also sits nice and low offering excellent forward visibility. All of the controls inside are easy to reach and feel robust – like most Japanese-built cars.

The chunkier seats offered in the STI model are more friendly to those with thinner hips, but overall keep the front occupants contained when testing the car’s limits. The rear of the car features a comfortable bench seat that follows the theme of the front sports seats, however, room-wise you’ll find it’s only good for two adults (or three kids).

The bonnet scoop on the new STI sits wider and lower than the old Impreza model, improving visibility for the driver but still retaining that bug-catcher look from the front. And for the first time on a WRX STI buyers are given a no-cost option to delete the large rear spoiler for a more subtle look – though we think it looks better with it on.

Giving the exterior of the new STI a mean look are a set of 18- by 8.5-inch mesh alloy wheels, or if you opt for the Premium model you get lightweight (1kg lighter) forged BBS items. Both models share the same grippy Dunlop Sport Maxx RT 245/40 tyres.

The STI might be performance focused, but safety remains paramount, featuring a total of seven airbags, including a driver’s knee airbag, reversing camera, vehicle dynamics control stability system and ‘ring-shaped reinforcement frames’ around the cabin that help in the event of a heavy collision or rollover. ANCAP has awarded the WRX a full five-star safety rating. 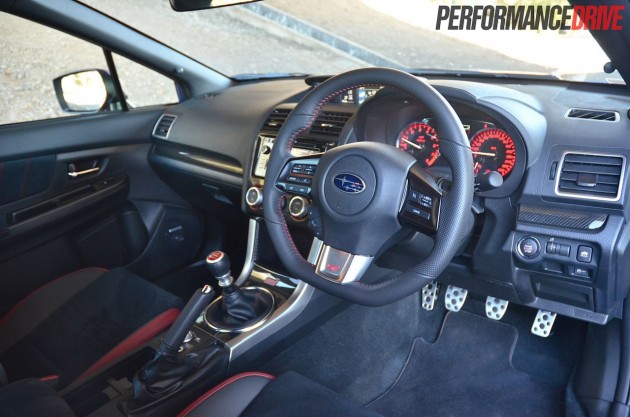 Though the engine might be carried over from the last model, the positive is that the fierce and distinctive engine rumble is still there – something the new turbo FA20 2.0-litre engine in the regular WRX lacks. From the second you turn the key an undulating throb is sent through the cabin. It’s not in an intrusive way, but enough to get you excited and know you’re definitely not in a Mitsubishi Lancer Evolution.

If you want the STI to get moving in a hurry you need to push some revs through the engine. There’s some noticeable turbo-lag below 3000rpm, but everything turns into warp mode from there on. Gear after gear you’re rewarded with loads of tacho-spinning, licence-eating thrust. The higher the revs, the better the engine sounds. And if you listen hard enough you can hear a slight blow-off sound when you back off.

The six-speed gearbox feels very mechanical and slightly notchy at times, but none of this detracts from its operation and overall yank-it-around toughness. The gear lever also sits proudly out of its leather boot at arm’s length, making it easy to grab hold of in a hurry. The gear ratios feel well-spaced and work well with the engine to keep things shifting along. The clutch throw does take some getting used to as it’s very unforgiving, mainly because the drivetrain feels so tight, but it takes no less than two or three drives to master it.

Unlike the new WRX’s electric steering rack, the STI uses a hydraulic rack and pinion setup (as seen in the previous model). This setup is more likely to appeal to those who enjoy a weighty feel. And if you’re wondering, given all the ‘numb-feeling’ stigma that is associated with electric racks at the moment, we feel this rack and pinion system provides more feedback on the limit than the electric setup in the regular WRX, which could obviously be due to other components as well, such as the lower profile tyres and tighter suspension on the STI.

New to the STI is torque vectoring for the front wheels. This system brakes the inside wheel when cornering to help prevent understeer and maintain grip. If you push really hard you can feel it working, but only if you really take notice.

Much like the previous STI, this model comes with SI-Drive where the driver can select from three operation modes; Intelligent – the smoothest setting, Sport – livens up throttle response, and Sport Sharp – the sharpest setting/the one you want if you’re pushing the limits. It’s best left in Intelligent if you’re potting around town and trying to conserve fuel. Sport Sharp makes the engine feel like it’s just had four cans of Red Bull, so unless you’re really after something very responsive, Sport is the happy medium.

We spent quite some time fiddling with the interchangeable diff settings and one thing you do notice is that in full lock mode, it really is locked. You won’t be able to swing the same three-point turn you normally would. No. With the centre diff locked, cornering under hard acceleration starts to feel more alive; it literally feels as though your organs are being torn apart as the tyres and diffs dig into the tarmac and yank the car around.

This is where the STI could be even faster with a dual-clutch transmission, but that could kill its mechanical appeal? In Sport Sharp with the centre diff locked things becomes so serious that during hard driving you find it hard to keep up with shuffling the steering wheel and swapping cogs. Think of the STI as a detuned time attack car for the road.

Launching the STI hard off the line is something you have to take time to master. It requires the right amount of revs and the right clutch action to get it, well… right. Too much of one or the other will leave you to stall the car or end up sitting in a cloud of clutch smoke. Get it right and you’ll shoot from 0-100 in 5.0 seconds. This is an impressive time for a car that has a sticker price under $50k.

If it’s fuel economy you’re after, the STI probably isn’t for you. We managed to return a combined figure of around 12.6L/100km during our week-long test. This figure can blow out beyond 16L/100km when you get really demanding with the right pedal. There’s more efficient AWD performance cars out there, like the Golf R (7.3L/100km versus the STI’s official 10.4L/100km), which is similarly priced at $51,990.

Another thing the STI offers over the standard WRX is more capable brakes. It features 17-inch discs front and rear, with four-piston calipers up front and two-piston calipers in the back. They offer relentless, aggressive braking at all times. Pedal feel is also very good, allowing you to make finer movements should you require. 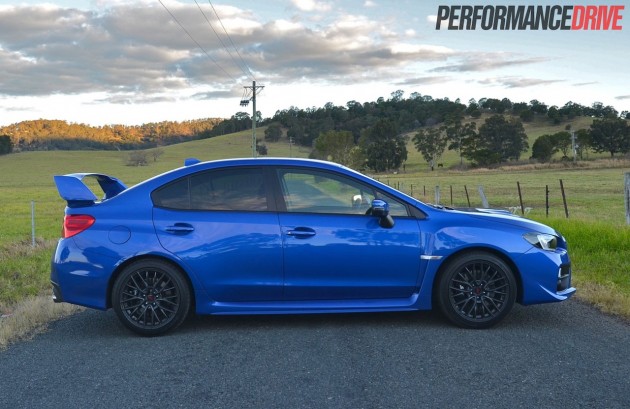 If we’re honest, the WRX STI isn’t for everyone. The regular WRX has more than enough speed and grip than most people desire or need for the road. What the STI offers up is a more hardcore version of that, but sacrifices some smoothness and driveability in the process.

It’s not as easy to use day-to-day as the WRX, but the STI is just so damn good when pushed hard it’s hard to not want that extra mechanical performance – especially for the price. If you’re planning on hitting the track a few times a year and are happy to live with a stiff ride and an engine that does its best work higher up in the revs, the STI is the car for you. 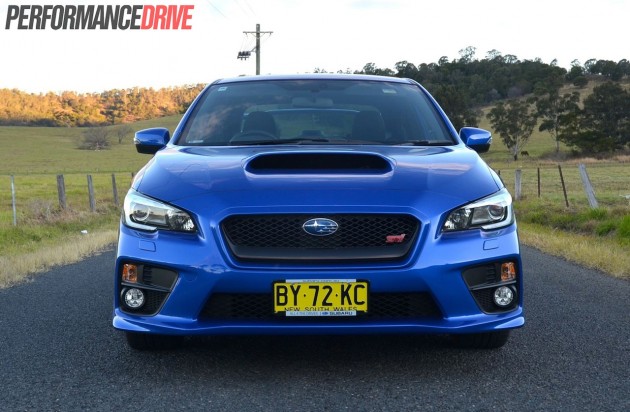