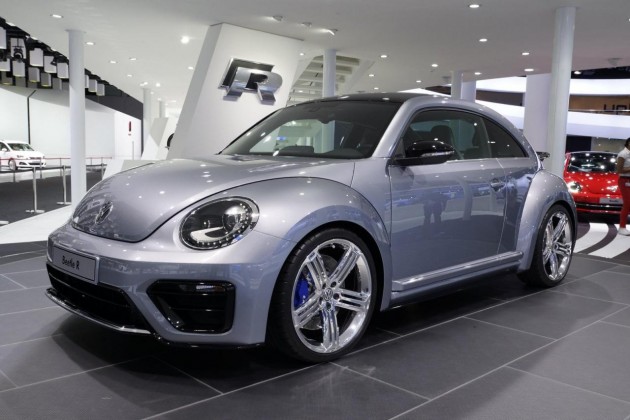 Even though Volkswagen hasn’t actually released engine and drivetrain specifics, Volkswagen has hinted that it uses a similar, if not the same, running gear to the Volkswagen Golf R and the new Volkswagen Scirocco R. This would mean it features a 2.0-litre TSI turbocharged four-cylinder engine pumping out 199kW (Australia-spec Golf R and Scirocco R offers 188kW and 330Nm).

You have to admit, the Volkswagen Beetle R Concept looks pretty darn hot. It features a chunky bodykit with new front and rear bumper bars, as well as a neat rear spoiler which harks back to the days of the sports models and tuned versions of the original Volkswagen Beetle. 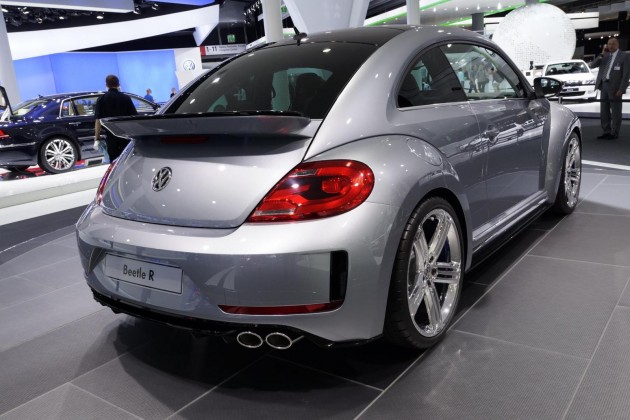 At the front there’s a large chin air intake to suck in fresh air for engine and radiator, while at the sides of the bumper bar there’s racy venting for the uprated front brakes placed inside the spotlight housing. While at the rear, there’s aggressive vertical-style venting slits in the corners of the bumper bar, topped off with a neat little rear diffuser at the bottom.

Volkswagen has no immediate plans to put the Volkswagen Beetle R Concept into production at this stage, but we’re sure if enough interest is gathered, Volkswagen may put some kind of sporty version of the new Beetle onto the market, possibly taking plenty of inspiration from this concept.

With a lot of the other manufacturers coming up with sporty hot hatches and retro remakes – such as the Fiat 500 Abarth and the MINI Cooper S John Cooper Works – is there demand for a proper high-performance version of the Volkswagen Beetle do you think?