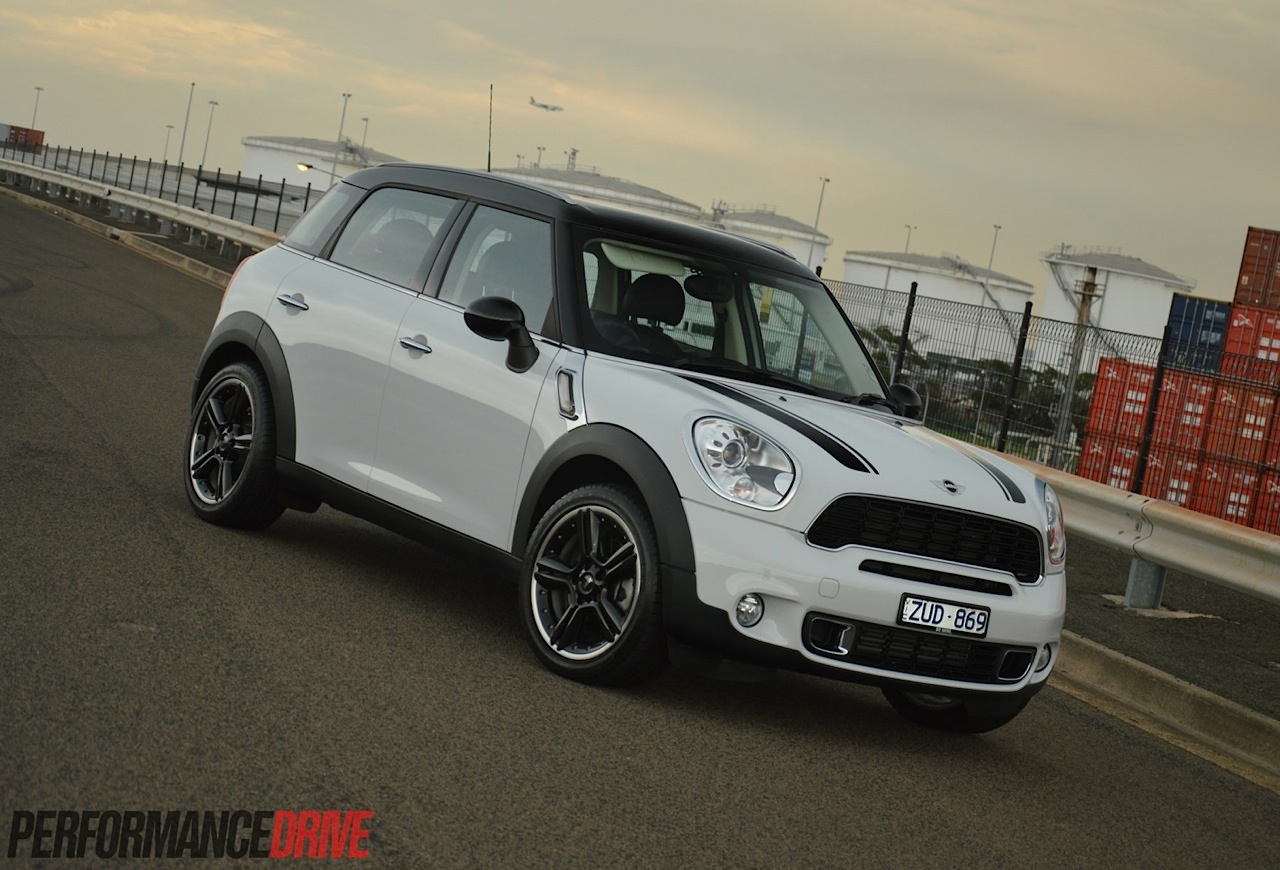 There’s no doubting the super-sticky, go-kart-like grip and all-round enjoyment of the MINI Cooper S, but what if you have a family and need more seats and a usable boot? The MINI Countryman Cooper S could be just what you’re looking for. 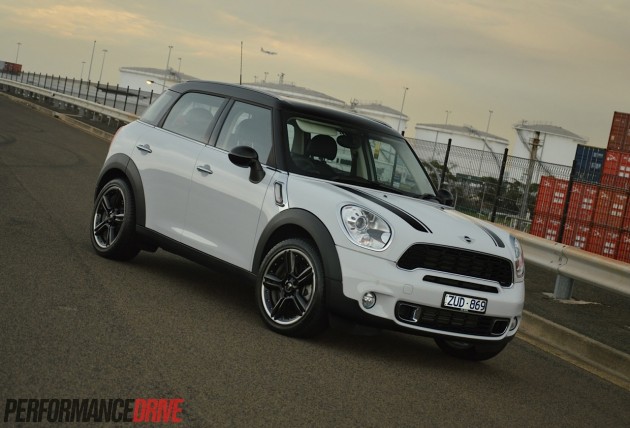 MINI introduced the Countryman back in 2011. Not much has changed since then, with the current model keeping the same exterior and interior design. Some updates have been made to packaging and options along the way to keep it competitive in this fairly niche market segment.

According to the Federal Chamber of Automotive Industries, the Countryman’s main rivals are the Audi Q3 and the BMW X1. We disagree. The Countryman has loads more personality and character than those two. It’s also more sports-oriented, offering proper driver’s car qualifications. We think it forges its own unique segment.

In Australia there are what seems like an endless lineup of MINI models. These can be further dissected into a profusion of Countryman variants. Essentially, what you need to know is there are turbo and non-turbo models, turbo-diesels, and front-wheel drive and ‘ALL4’ four-wheel drive versions of each.

What we’ve got here is the Countryman Cooper S front-wheel drive. It does ride on the same slightly jacked up chassis as the ALL4 versions but to save a bit in weight and to bring down the already-admirable fuel economy, engine power is sent to the front wheels only. 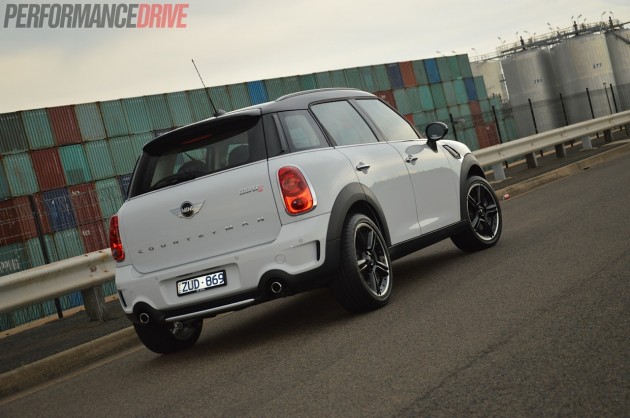 Just like the very loveable three-door Cooper S cousin, the cabin is filled with life in the Countryman. There’s a whacking great big speedo in the middle of the dash, just for fun, lots of curvy and bubbly surfaces with a variety of textures and materials, splashes of silver and chrome, and of course seating for five.

The interior layout can come across as a bit busy for some. It’s loud and flamboyant with a party going on pretty much everywhere you look. In that sense, it is going to take a while to get bored of it.

We love the aviation-style switchgear with retro dials and instruments. Chrome finishing for some of the handles and touch surfaces also contributes to the funky user experience.

Despite all that dazzle and pizazz, the decor has been around now for over five years, and to anyone who knows their MINIs, the layout could be starting to look old now. 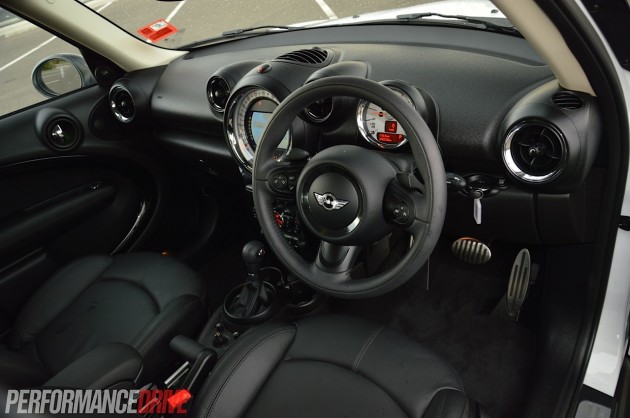 The main reason you’re going to want the Countryman is for the added practicality over the regular hatch. MINI has implemented some clever functionality into the Countryman resulting in more than just a MINI with extra doors and seats.

The rear seats are not blended into one common bench. Instead, each seat is like an individual sports chair that can flip down. And each spot is comfortable aside from the middle position, as with most vehicles. Legroom is more than satisfactory and headroom is okay. Vision in the back is really good, which is a bonus for the kiddies that want to peer through the window as you drive along.

In the front it’s almost identical to the regular hatch. The driving position feels a touch higher, and you do notice the added ground clearance. If you’re after a high-riding SUV driving position you’ll need to look elsewhere though, this is still a MINI at heart with seats that feel close to the action.

Carting stuff around is made easy thanks to a conventional upward-opening tailgate and a cargo capacity of 350 litres (1170 litres with the rear seats folded down). Although there is considerably more volume compared with the normal Cooper (160L, 211L for the 2014 model), the Countryman’s trunk can’t contest with rivals which offer significantly more space; 460 litres (Audi Q3) and 420 litres (BMW X1).

Under the bonnet lives the same peppy 1.6-litre turbocharged four-cylinder as with all Cooper S models. It produces an angry 135kW of power and 240Nm of torque. This is sent through a conventional six-speed automatic transmission with paddle shifters.

As for equipment and packaging, you could spend a decent chunk of your annual salary on options. Being a product of BMW, there are heaps of features to choose from. Fortunately a lot of the ones you might like are cheap. Race suspension, for example, is just $440. The black stripes on the bonnet (as tested) are just $200. And a beefy Harman Kardon stereo system (as tested) is a reasonable $1200.

There are a handful of options that should be standard on what is basically a $50k car by the time you pay on-roads. Items such as dual-zone climate control ($550), GPS sat-nav ($1150), and auto headlights ($400) are included in other, often less-expensive, vehicles. 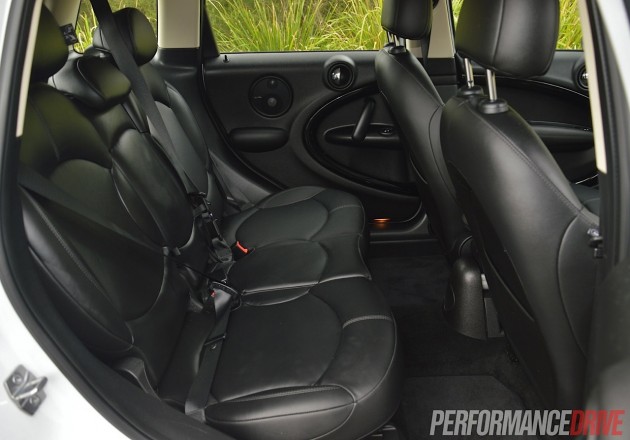 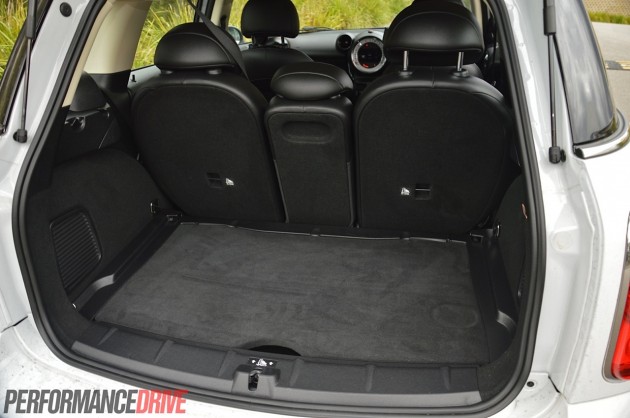 If you’ve never driven a late model MINI before, the Countryman will be an especially exciting drive for you. The suspension, while a tad stiff, completely eliminates body roll and the steering is direct and sharp. We know it’s a cliche phrase for the MINI but it really does remind you of a go-kart.

With an electronic differential lock as standard, the Countryman Cooper S really hooks up in the corners. You can pull some serious g-force railing around bends while keeping the throttle depressed. There’s no oversteer and virtually zero understeer. It’s solid and confidently planted. You do have to contend with a bit of tug at the wheel and torque-steer when you’re really pushing it, but it makes the drive all the more interactive and enthusiastic.

Engine performance is animated and quite frisky. From low in the rev range, just 1600rpm in fact, maximum torque pulls the engine up into an angry mid-range. It’s then at its peak at around 5000rpm before it wants another gear. It seems like the engine will rev higher as it gets to its peak quickly, but in reality the car’s momentum builds faster if you jump up gears sooner rather than later. The impressive torque will surge through higher gears.

Flat out acceleration off the mark will cause some violent wheelspin followed by a satisfying smile on your face (with the traction control off), with 0-100km/h coming up in 7.5 seconds according to our tests. It is quick. In-gear sprinting is just as appetising, with strong overtaking power so long as you don’t mind the engine revving hard.

Overall, the drive is very enjoyable and engaging. There is a sense of occasion to driving one of these little beasts as well, with the exhaust popping and crackling at every chance it gets (especially in Sport mode).

We did notice some interior fixtures rattling and squeaking during our test. This seems to be a common issue with modern MINIs.

Also, the engine can get rather parched when you drive with exuberance. During normal conditions expect a fuel consumption average not far off the official rating of 7.5L/100km. Give it some stick and you’ll see it penetrate beyond 10L/100km. 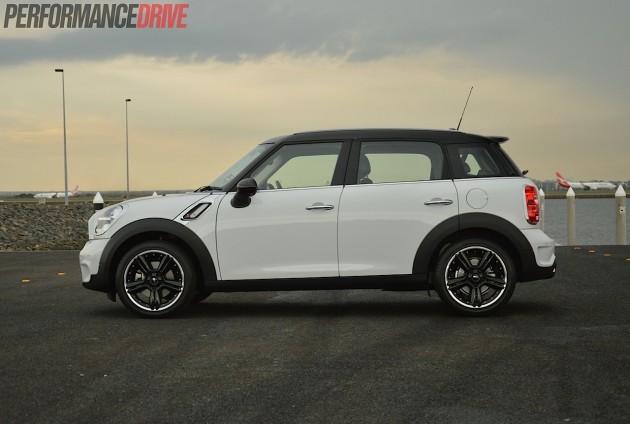 You can still buy the Clubman, which we think is a nicer-looking proposition and almost as practical as the front-wheel drive Countryman. It offers a similar wagon-style cargo area only it doesn’t have dedicated rear passenger doors.

What we’re saying is if you’re going to go for the Countryman you might as well spend a few extra thousand and get the ALL4 four-wheel drive running gear so you can do a bit of off-road adventuring. If you just like the idea of having a MINI wagon, the Clubman is the cheaper and more sporty option.

Either way you’re going to be hugely impressed with the sheer adhesion and potential cornering speed of the Countryman. Add to that some off-road ability and reasonable cargo room, and what you’re left with is the automotive equivalent of the Swiss army knife. 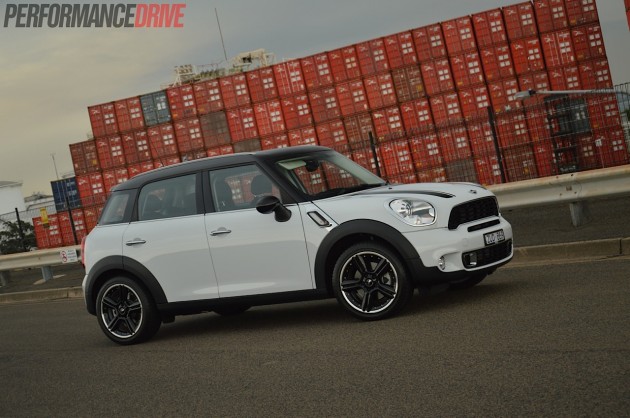