Engine specifications of the new 2014 Maserati Quattroporte have been revealed. The new model will make an official debut at the 2013 North American International Auto Show in Detroit, in January. 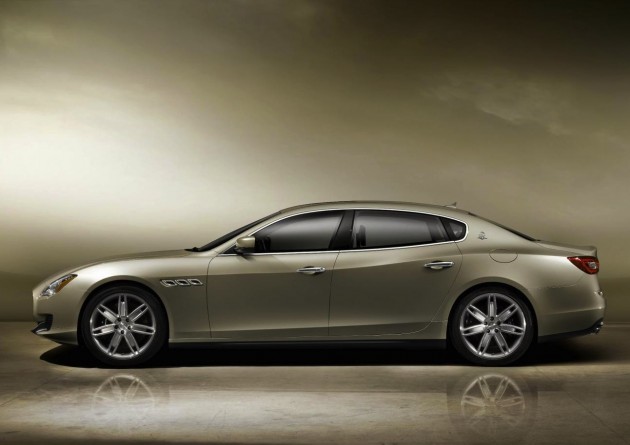 According to a recent Motor Trend report in the US, the new model will come with two different turbocharged petrol offerings. One will be the high-end V8 flagship providing high levels of performance, while the entry-level model will be slightly slower but perhaps more fuel efficient.

For the entry model, power is set to come from 3.0-litre twin-turbo V6 engine borrowing its foundations from the Chrysler 3.6-litre Pentastar unit. Thanks to two turbochargers, power will be at around 301kW, with torque peaking at 550Nm. This should allow the big four-door to sprint from 0-100km/h in 5.0 seconds. The engine block will be adopted through Fiat’s new ownership of Chrysler.

Stepping up into the top-spec model, power will come from a 3.8-litre twin-turbo V8 producing a much more serious 390kW and 710Nm. This could allow the Quattroporte to sprint from 0-100km/h in 4.7 seconds.

It’s understood both engines will be built by Ferrari as per usual Maserati operations, despite one of them being partly donated from Chrysler.

This is not the first time Maserati has used turbocharged engines for its sedans. For decades all Quattroportes featured a small capacity twin-turbo V6 or V8. The last turbo Maserati was the 3200GT, which went out of production in 2002.

The 2014 Maserati Quattroporte will arrive in Australian showrooms during the third quarter of 2013. Local prices and specifications will be announced closer to the launch.