Audis has released details on the new 2013 Audi RS 6 Avant wagon. Not only has it caught up with the key rivals from BMW and Mercedes-Benz, it surpasses them with an incredible average fuel economy rating of just 9.8L/100km. 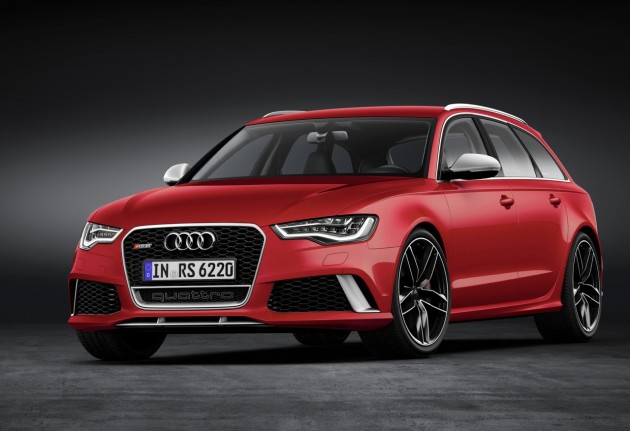 Both of the large turbochargers and the intercooler are mounted conveniently in between the cylinder banks, meaning the exhaust ports are on the inside while the inlet is on the outside. Audi says this type of layout provides shorter gas paths, helping to improve throttle response.

The mighty unit is backed up to an eight-speed tiptronic transmission, sending power to an all-wheel drive system with an automatic centre differential lock. The drivetrain also features a sport differential at the back which divides up power evenly when required.

All this equates to, again, class-leading performance out on the tarmac. Acceleration from 0-100km/h takes just 3.9 seconds, while its top speed is 305km/h.

Performance like this also comes thanks to a 100kg weight reduction over the previous model, with 20 per cent of the body made from aluminium. 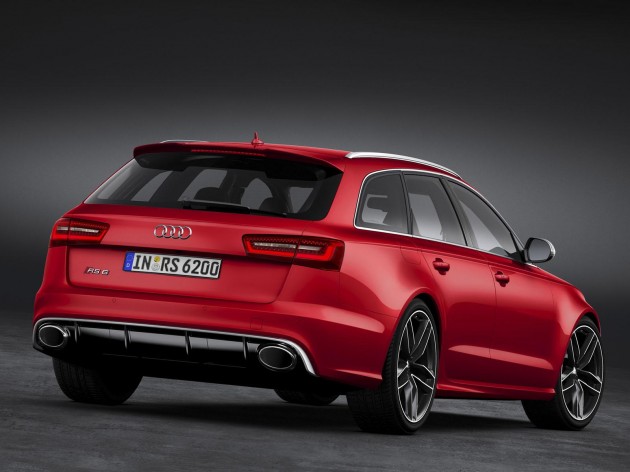 Unlike the key rivals, the new RS 6 comes with a bi-modal exhaust system which can be switchable from quiet to louder modes from within the cabin. A full sports exhaust system is also optional.

So how has Audi achieved such a low fuel economy rating? Apart from the direct injection system, the V8 also comes with cylinder deactivation which cuts four cylinders from the combustion sequence when under low loads. Audi says the cylinder on demand (COD) system reduces fuel consumption by five per cent, or more when cruising at moderate speeds. The company also says the transition from four back to eight cylinders takes just a few hundredths of a second.

On the outside the Audi RS 6 features a modest yet aggressive bodykit, with a sharp front bumper bar incorporating large intake vents, side skirts, and a rear spoiler and diffuser to guide airflow. 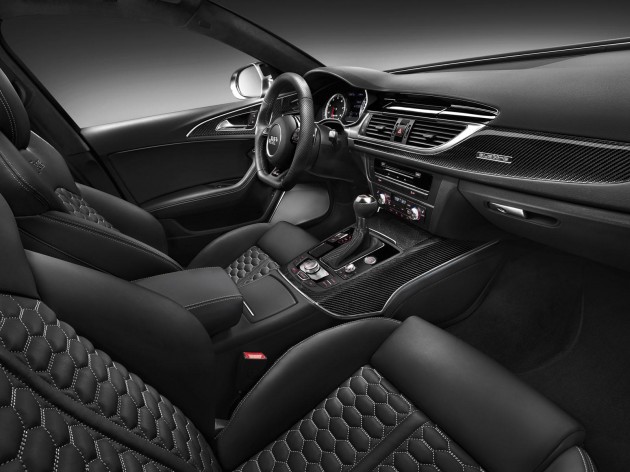 Inside, the RS 6 comes with all the usual features you would expect on a top-of-the-range Audi A6, including an MMI user interface with satellite navigation, leather upholstery, and loads of power conveniences. Being a wagon, up to 1680 litres of luggage space is also on offer.

The RS model adds carbon trimmings, sports bucket seats, and various ‘RS’ badges and logos. Two bucket-style seats are in the back, however, Audi offers a traditional three-person bench if desired.

The new model is expected to go on sale in Australia later in 2013.

UPDATE: The new RS 6 will go on sale in Australia during the final quarter of 2013. Prices will be announced closer to its launch.