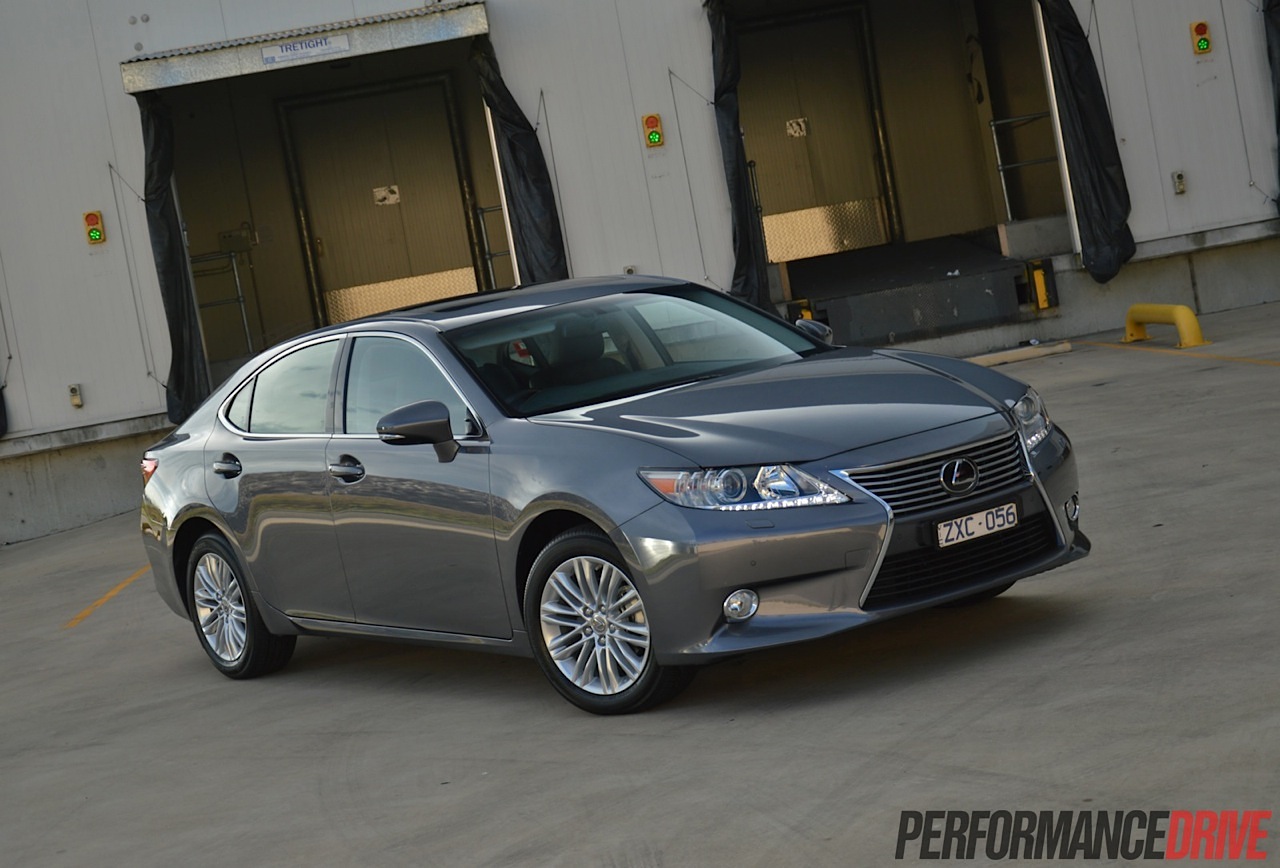 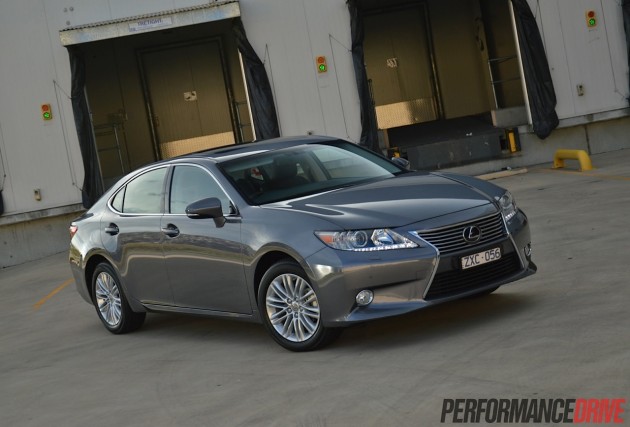 The Lexus ES nameplate is no stranger to the Australian market. It’s been around for over 25 years. However, it did go on hiatus in 2006 until 2013 because Lexus decided to stop producing right-hand drive versions. But now it’s back and it’s available in a wider range than ever before.

The model we’re testing here is the ES 350 Sports Luxury, which is actually the second most powerful front-wheel drive on the market today. Power comes from a 3.5-litre naturally aspirated V6 pushing out a maximum of 204kW and 346Nm through the front wheels. ES 350 models are backed by a six-speed automatic transmission and the hybrid comes with a CVT auto. 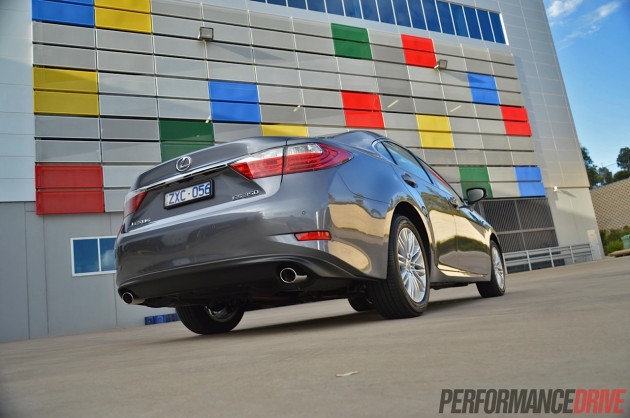 Despite being based on the same platform that underpins the Toyota Camry (50mm longer, like the overseas Avalon), the ES uses a completely different body and mechanical components.

Lexus always goes the extra length to make sure the drive is as relaxing and luxurious as possible. That means the cabin is whisper quiet. The power windows, for example, operate in a distinct manner and slow down near the top so there is no noise upon closing. In fact, everything that opens and closes does so almost silently and with the gentleness of a feather falling to the ground.

If you’ve ever been to a furniture shop and sat on some of the dearest lounge chairs in the place just for fun, you’ll notice the Lexus is like one of the high quality settings. It smells expensive, with really soft, supple leather covering the seats and equally comforting cushions within. It’s like you’re sitting on whipped cream.

In regards to rear seat space, we volunteered to chauffeur a friend to her wedding and used this very car as the main wedding car. Suffice to say, the rear seat offered ample legroom and headroom for her, her veil, and her father. Despite the nerves that would have obviously been running through her system, she was calm enough to point out how pleasant the cabin is.

Headroom and particularly legroom in the back is impressive. There’s also an electric blind shade that can be deployed for the rear windscreen, and manual screens can be lifted up in the rear doors for added privacy.

About the only negative aspect of the rear-seat layout is the somewhat hampered vision through the back for the driver. The C-pillars are thick.

In the very back you have a big boot, capable of swallowing 490 litres worth of things. 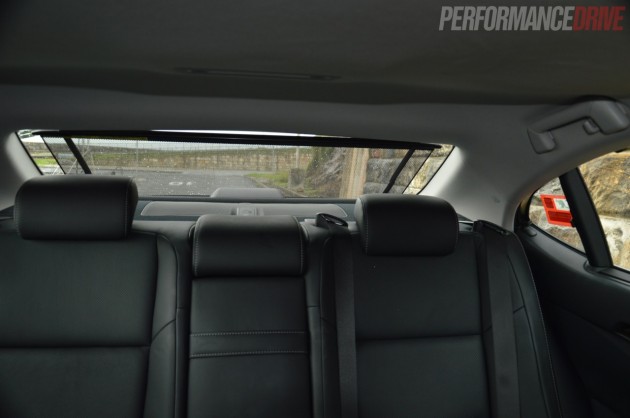 In the front it’s as pleasant as you could want. Most functions and buttons are within easy reach and the layout is immediately fathomable. If you’ve had a big week at work or a long night in the office, the last thing you need is a complicated and overwhelming place to rest during your journeys. When you hop out of the ES, it feels like your mind and body has been relaxed and refreshed thanks to the uncluttered design.

Lexus models of late have been pushing the benchmarks in terms of in-car technology, design and innovation. The new ES keeps that momentum going, with wood and titanium-style trimmings, exposed stitching on the dash, and a comprehensive multimedia interface as standard, with sat-nav, Bluetooth and digital radio. The interface is controlled via a mouse-like ‘Remote Touch’ hand pad, which has adjustable sensitivity and response settings.

It’s an easy system to use and sure beats reaching up and fiddling around with touch screens. There’s a main menu button down near the controller too that quickly takes you back to the main screen should you end up too deep and lost within the functions. 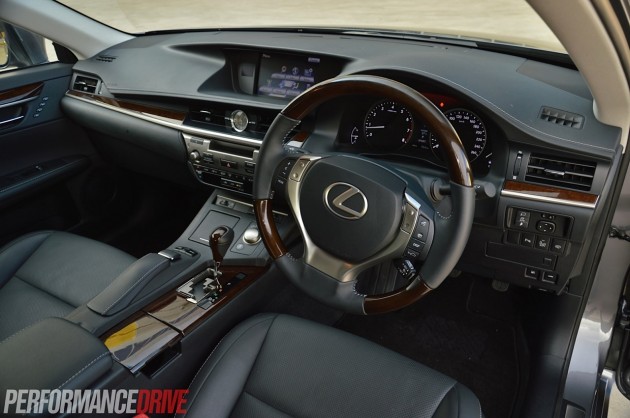 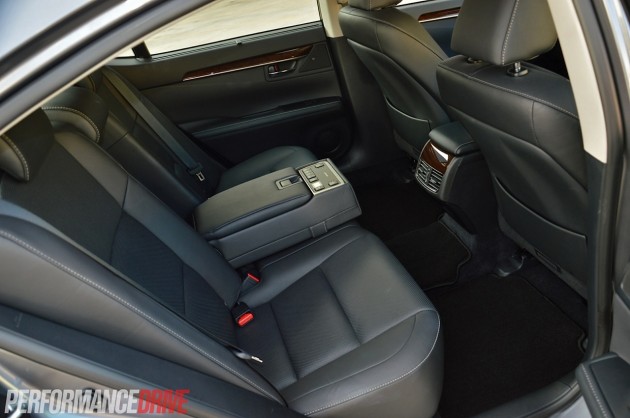 It might only be a V6 in a world of high-torque turbocharged offerings, but it’s a powerful one, requiring tiny throttle movements to overtake or get up to highway speed. If you really give it some the traction control goes wild and does its best to harness the power.

The engine has the potential to inflict all kinds of torture to the front tyres if you have the traction control switched off. In this mode we timed 0-100km/h in 6.7 seconds, and that’s a quick time for a car this isn’t necessarily trying to be sporty. Under full throttle the engine comes alive and gives off a reserved yet angry rasp.

Giving it the beans brings us to a bit of an issue. We think the tyres are too narrow. For a large prestige car, 215mm is not enough tread in our opinion. Most vehicles in this segment (and some in lower segments) feature at least 235mm. A relatively tall profile (215/55) does help to provide a smooth ride but it doesn’t do much to maximise a secure, planted feel when – and if – you ever need to get enthusiastic with the steering wheel or throttle. Even with the traction control on you can feel the tyres nervously tensing under the power and weight (1665kg) of the car.

Fuel economy is not bad for this kind of engine. It’s not pressurised in any way, so you shouldn’t expect anything remarkable – besides, there’s always the ES 300h for pure economy. We averaged 10.8L/100km during our week with the ES 350 and the official average is 9.5L/100km. For the amount of performance that’s on offer for such a large car, the real-world consumption is respectable.

Without complex charging systems (turbo or supercharger) you do get increased reliability. This engine will no doubt drive on for hundreds of thousands of kilometres before needing any serious attention. And it’ll probably outlast most of its turbo rivals.

You can notice steering and handling has been set up for sheer comfort. The ride is tender and the steering is light. Around town the ES 350 is a relaxing drive, ironing over potholes and road connections like they aren’t there.

If you’re in a rush one day the ES is able to swiftly move you through traffic thanks to the roaring V6. When it comes time to turn, the chassis glides around with little complaint. There are three driving modes selectable on the console, with each making minor changes to the fundamental characteristics, such as throttle response and steering feel.

It’s not until you really push it does some kickback come through the steering. You can’t expect it to be the most agile of luxury sedans, as it’s not trying to be. In other words, this is happier being a majestic streamliner rather than a hot hatch. Even so, it handles the bends with satisfactory composure and decent enthusiasm.

Working through the gears the six-speed self-shifter is refined, smooth and in sync with the character of the car. It changes up quickly and downchanges on demand. It is one of the nicer torque-convertor autos on the market.

Like most Lexus vehicles, the brakes are not overwhelmed by the engine performance or weight of the car. It’s all balanced, and the ES 350 is able to pull up time and time again, including if you decide to throw some abuse their way with a vigorous mountain sprint.

It seems like the Lexus ES creates a new segment. It’s not quite as expensive as the higher-spec, rear-wheel drive GS and its rivals, yet it’s too luxurious and large to be classed as much less. In that respect it doesn’t really have direct competition in Australia. This car offers niche appeal and at a reasonable price.

If we could change one thing about the car it would be the wheel and tyre package. It needs something more substantial. We suspect handling, agility and high-speed stability could be optimised with a more generous setup, without turning it into a rock-hard sports sedan.

CONS:
– V6 is powerful but behind times in efficiency
– Tyres are too narrow (215mm)
– Looks a bit boring? 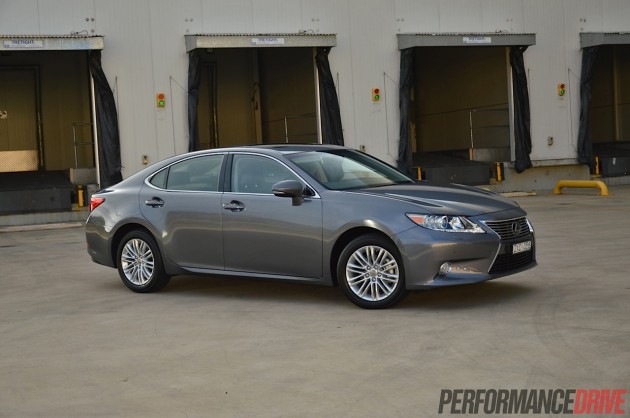