Welcome to the 2013 BMW 650i Gran Coupe – perhaps one of the sexiest BMWs currently on sale. It blends a beautiful elegant design with lots of the company’s latest cutting-edge technologies, propelled by a twin-turbo V8 masterpiece capable of giving you aural ecstasy. 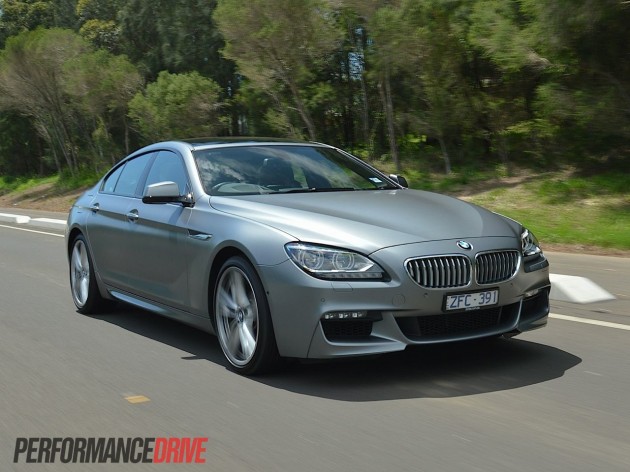 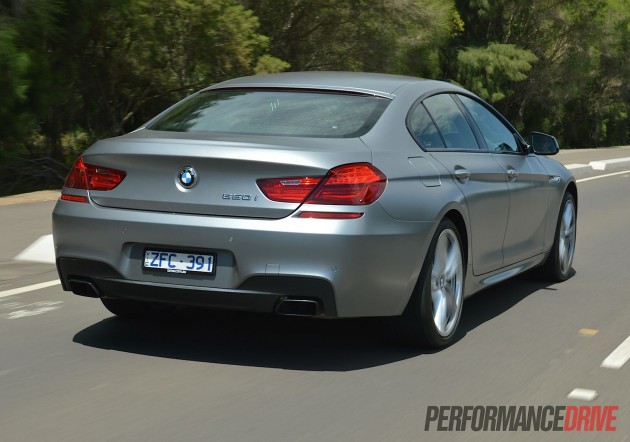 The Gran Coupe is BMW’s answer to the Mercedes-Benz CLS-Class and the Audi A7/S7 Sportback. It takes on the large four-door coupe layout, with the grace and style of the 6 Series coupe/convertible.

At the moment, the 650i is the flagship model. Later in the year it will be joined by the M6 Gran Coupe, showcasing the performance character and all of the tasty M components as the M6 and M5.

The 650i may not be a dedicated ‘M’ performance vehicle, however, it is a barnstorming luxury cruiser with a growling twin-turbo V8. A ‘detuned’ M6/M5 engine in fact – the pistons, and bore and stroke measurements are slightly different, among other things. 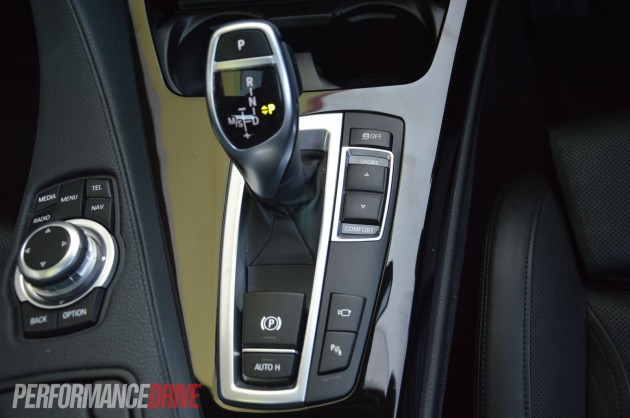 Yep, underneath that long lustrous bonnet sits a 4.4-litre twin-turbo V8 producing 330kW of power and 650Nm of torque (down from the M6’s 412kW/680Nm). It’s quite capable of turning the rear tyres into Clag paste and smudging the side windows into blurred, incomprehensible scenery.

Power is sent through an eight-speed automatic transmission with paddle shifters and into the rear wheels. Unfortunately, there is no limited-slip differential, only an electronic traction control arrangement.

The 650i sits dangerously above the M5 in terms of price, being $8800 more expensive. It features the same length wheelbase with similar features and equipment, only the 650i has less power and is less overall dynamic. The M5 doesn’t come with these looks though. 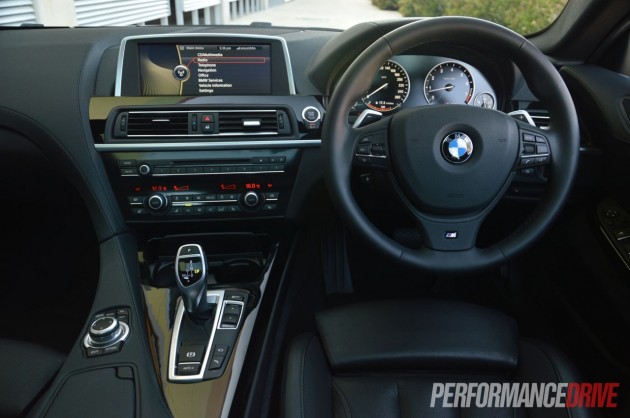 Taking a seat in the 650i Gran Coupe is all that’s needed to recognise the 6 Series underpinnings. The seats sit very low and the centre console and dash wraps around you, giving you a definite sports car impression.

Like all BMWs, the Gran Coupe offers a spot-on driving position. The steering wheel falls perfectly into your hands and the seats are soft and supple yet supportive for vigorous driving. 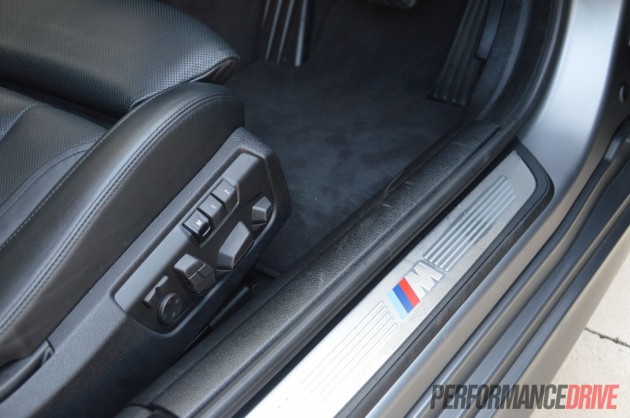 Being the flagship, the 650i comes with BMW’s finest ‘Professional’ grade multimedia interface with the ultra-wide 10.2-inch LCD display as standard. A Bang & Olufsen 16-speaker stereo is optional ($14,000), but a similar high-end sound unit is standard and comes with 16 speakers as well.

We found the standard system to be pretty impressive, but not quite as good as we’d hoped. We expected more theatre. If you’re spending this much on a car, you really want something that will almost change your life every time you listen to your favourite song. You would have to go for the Bang & Olufsen unit in our opinion, despite its high premium. 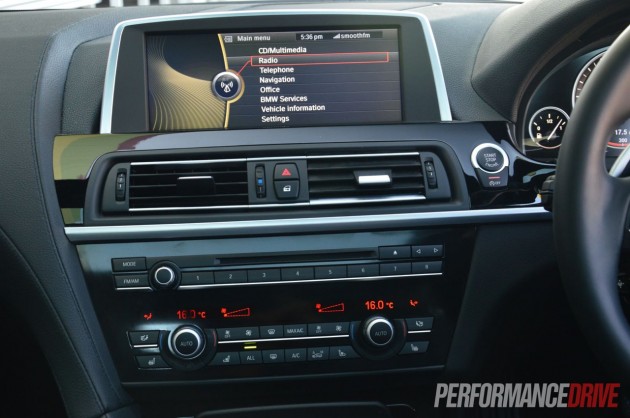 It’s not very often that you come across a vehicle that you actually want to sit in the backseat. There’s three seat belts which means it can legally carry three passengers in the back, but in saying that, the middle seat is seriously restricted by the back of the centre console which extends right up to the rear seat.

This houses the individual climate control settings for the rear passengers. It’s a very cool place to be sitting in the back, especially with the electronic seat heaters/coolers for the two side chairs. The sweeping roofline does intrude slightly on headroom, mainly concerning for tall rear passengers.

Speaking of the climate control, the entire unit offers four different temperature controls; one for each (comfortable) passenger. The advanced unit also comes with a solar/sun sensor and a humidity sensor to compensate for additional climate dimensions. In other words, it’s decades ahead of a regular AC system you get in a run of the mill hatch. 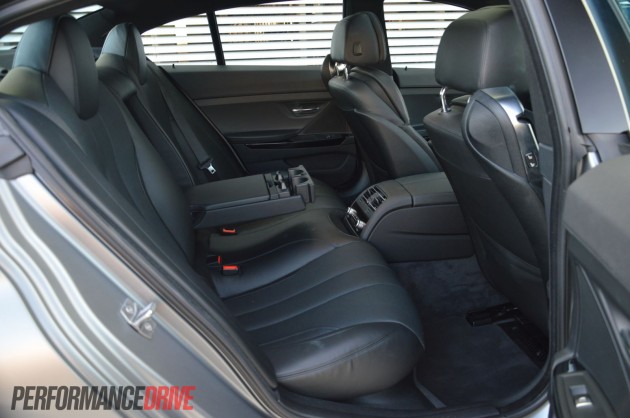 It really takes a good while to get acquainted with all of the luxuries and functions of the cabin. The iDrive system controls most settings, including the internet function, and vehicle settings such as how the ‘Sport’ and ‘Eco Pro’ driving modes are configured, and check vehicle functions for checking tyre pressures and the engine oil level.

If you love technology, you’ll enjoy spending a good 10-20 minutes going over everything like we did. The iDrive system has been critised in the past for being too fiddly, but the latest generation is now quick, intuitive and user friendly. 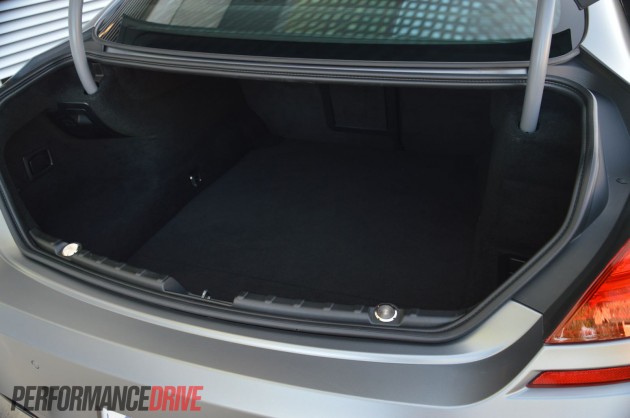 In the very back, the Gran Coupe offers a surprisingly large boot, with 460 litres capacity, expandable to 1265 litres with the rear seats folded. This is due to the extended wheelbase over the normal 6 Series coupe (2855mm to 2968mm). It dives really deep and can easily swallow a couple of golf bags and some luggage.

What can we say about the design? It’s simply gorgeous from any angle. It looks fat, mean, and elegant all in one. This test car is fitted with the optional M Sport pack too which heightens visual appeal even further. 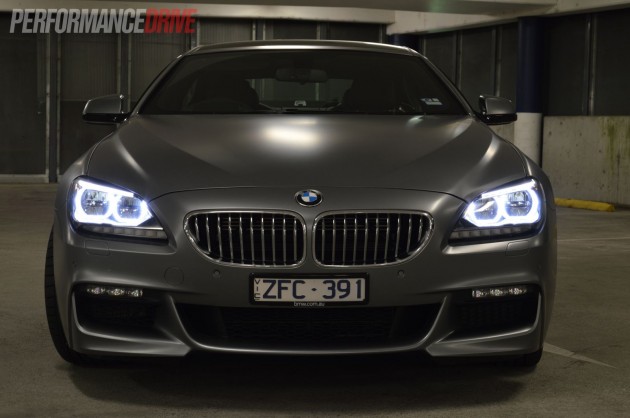 The swooping lines of the four-door coupe seem to be carried into the interior too, with the doors wrapping around the front passengers, pillarless side windows, and a laid-back seating arrangement.

With the optional ($4800) Frozen Grey matt-finish exterior colour (as tested), the Gran Coupe is pure, unadulterated sex on wheels. The matt paint gives it a kind of aftermarket look too, enhancing its on-street respect. As a result, the 650i Gran Coupe loves to magnet the attention of onlookers. It’s an imposing and dramatic-looking machine, can you blame them?

Happily, ANCAP hasn’t crashed a 650i Gran Coupe into a wall for testing purposes. It has awarded the regular 6 Series a full five-star safety rating though, which is basically interchangeable with the Gran Coupe version.

Safety features include eight airbags, traction and stability control, front, rear and side vision cameras, a ‘safety body shell’, active headrests which catch your head to reduce whiplash during an accident, and auto headlights and wipers. Strangely, the auto wipers need to be turned on every time you get in the car – you would think it’d be better to have them on as default and then a button to turn them off if required? 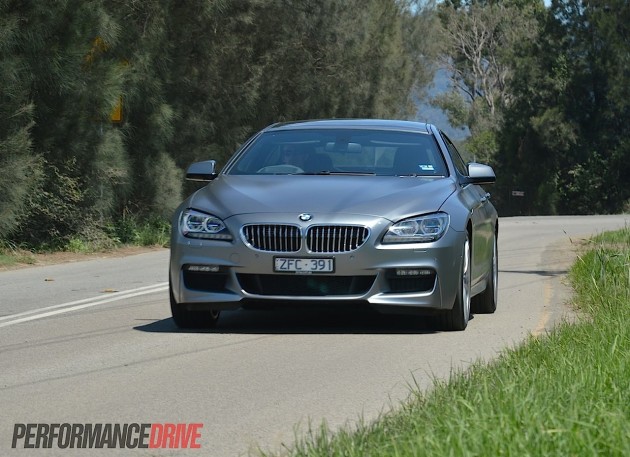 Simply looking at this car you can see it’s obviously not a lightweight, stripped back sports car. The 650i Gran Coupe is a grand tourer, targeted specifically at luxury car buyers and those who wish to waft along the highway in unbridled – and brutally powerful – prestige.

When you jump behind the wheel, you don’t immediately feel the grand touring nature. It feels pretty much like most other BMW vehicles; it feels sporty with supremely precise steering and an eager yet solid personality.

It is rather big and heavy (1865kg), sure, but when you’re trundling about and threading through streets and turns, the weight is not really noticeable. The main thing you do notice is that perfect driver’s-dream steering and confident and communicative chassis that all BMWs are renowned for.

It’s not until you turn up the tempo a bit that you see why BMWs are so highly praised by driving enthusiasts. With the suspension in ‘Sport Plus’ mode, the 650i GC feels happy and up for a challenge no matter what you throw at it, even if you pitch it down a set of tight twists and turns. It’s as if the car is oblivious to its own limo-like size and just disregards the laws of physics for you. It’s a surreal experience. 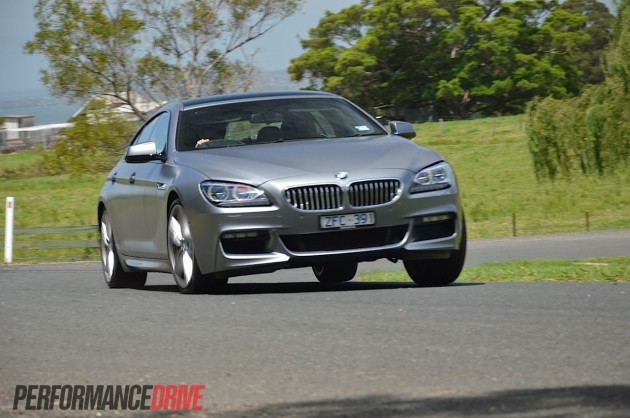 On more open roads and longer bends, it’s even more brilliant. It always feels solid and secure with a regal, almost pompous level of ownership of the road. And as you would expect, being developed at the home of the speed-limitless autobahns in Germany, high speed stability is paramount.

With the driver settings  – Comfort Plus, Comfort, Sport, Sport Plus – you can easily find your favourite ride quality. We would have liked a bit more firmness in the Sport Plus setting, however, firming up suspension on a long vehicle like this (just over five metres) can put big stresses on the chassis, which would of course require more engineering and costs. But anyway, that’s where the M6 Gran Coupe will come in

In Comfort Plus mode, the 650i feels like it actually enjoys and anticipates soaking up bumps for you, only to softly spit them out with the calmness of an inflated balloon being dropped. The 650i is a driver’s car, whether you like active stints or relaxing cruises. 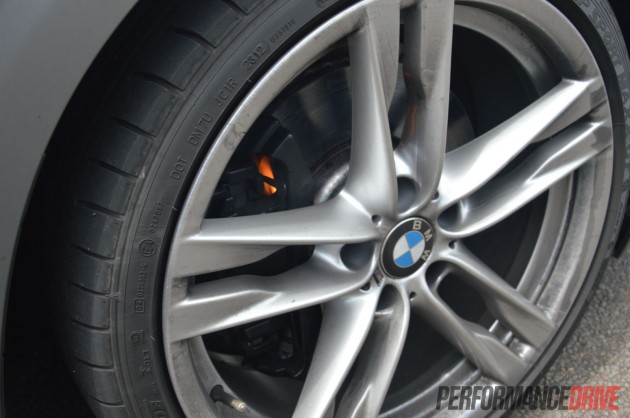 During our usual strenuous driving tests, the brake pads on our demo vehicle did overheat and catch fire, a bit (above). This is a fairly common occurrence for factory vehicles though and a result we put straight down to the pads. If you’re planning on dancing with the 650i on a regular basis, we would recommend getting some performance pads put in.

Surprisingly, despite the pad’s tendency to overheat when treated vigorously, at least on this test car, the pedal doesn’t drop and there is very little fade. The actual fluid doesn’t’ feel like it overheats, which is what usually results in fade and pedal drop.

(There is the possibility that this test car was subjected to previous hard tests and the pads may have deteriorated somewhat.) 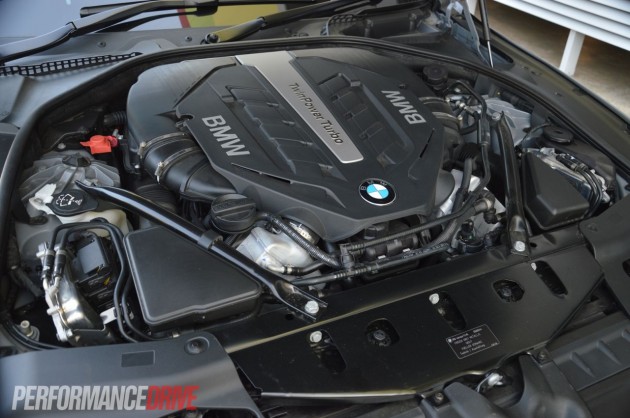 The engine is easily the best thing about the 650i. It loves to rev, all the way up to its 7000rpm redline. There’s loads of torque on tap too, with 650Nm up in arms from an incredibly low 2000rpm. And the sound it all creates? It’s like a two-stroke ski mobile crossed with a Ducati motorcycle. It’s an awesome soundtrack, splendid enough to send goosebumps down your spine and leave you chuckling in awe.

The only slight drawback we find with the engine is that it seems to delay off the mark. You cannot simply nail the throttle and be sent away like a golf ball. The throttle response is immediate, in terms of engine revs, but the drivetrain feels a little lagged. It’s like the engine’s computers are saying, ‘are you sure you want all of that power right now? Well… okay then’.

As a result, we couldn’t match the factory 0-100km/h time of 4.6 seconds. We timed 4.8 seconds with a fair amount of wheelspin (see video above) with the traction control switched off (achieved by holding down the off button for more than three seconds).

Speaking of the traction control, even with the systems turned off the computers will still rein in power if it feels there is an excess amount being delivered. It can be rather frustrating if you’re trying to play around with the tail in the corners. The lack of a limit-slip diff also tarnishes its ‘fun factor’. 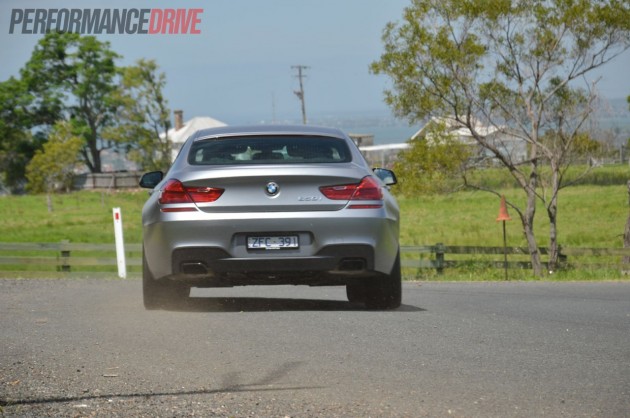 The 2013 BMW 650i Gran Coupe is an exceptionally pampering luxury cruiser combined with breathtaking overtaking power and a cracking, exotic V8 soundtrack.

It matches all of BMW’s world-famous qualities too, with utmost attention to detail, luxury, and technology, including fuel saving technology – we saw the trip computer drop as low as 8.9L/100km during our test, which matches the ADR (Australian Design Rules) rating.

To look at this from a performance car perspective though, and as enthusiasts, we would personally go for the BMW M5. It’ll save you $8800 and it offers very similar prestige and conversation-spiking features, but you get the full backing of M Division with a monumentally capable drive, over and above the already proficient 650i. 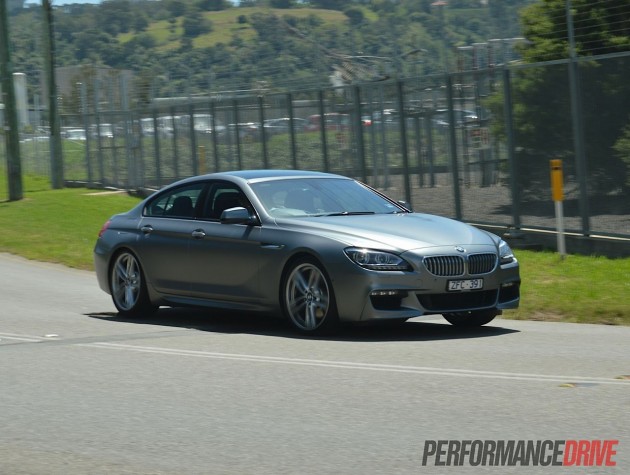 FUEL TYPE
95 RON recommended, E10 or 91 RON can be used (according to owner’s manual) 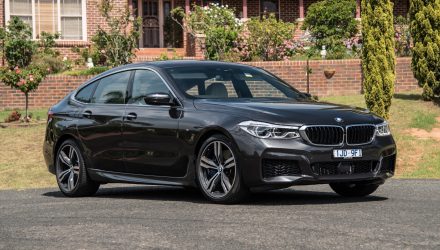 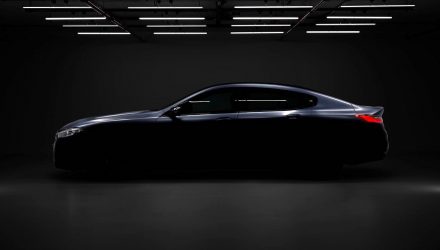 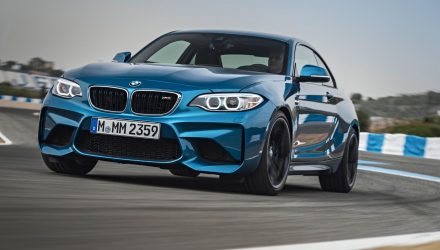 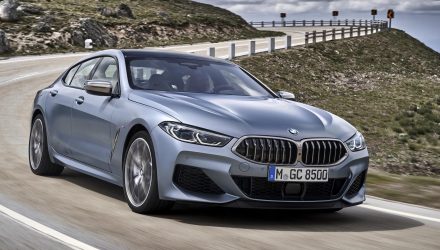