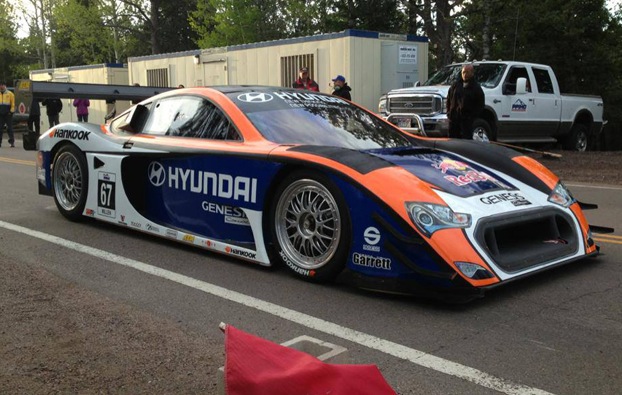 Hyundai has finished preparing and is now testing its monster Pikes Peak racer it will use in this year’s International Hill Climb event. The car, known as the Hyundai Genesis PM580T, is based on the previous PM580 prototype.

Competing in the outright ‘Unlimited’ class, up against the serious contenders such as the Peugeot 208 T16 and the Monster Sport Toyota Super 86, the Hyundai is built on a dedicated Crawford Race Cars chassis.

With a construction predominately made up of carbon fibre and titanium, the weight of it all is set to be around 453kg. The body has also been aerodynamically formed to ensure maximum air flow, optimum intake, and high pressure downforce in all of the right areas.

As for the power? It comes from a heavily tuned version of Hyundai’s production Lambda 3.8-litre V6. After various modifications, including a turbocharger, the factory outputs climb from 259kW and 399Nm to a whopping 671kW and 1083Nm.

The Hyundai PM580T will be piloted by last year’s record-holder, Rhys Millen. The Genesis Coupe that Millen drove to the record run last year will be driven by Paul Dallenbach.

All of the action starts on June 26, with the big race day taking place on June 30. Stay tuned for plenty of updates.