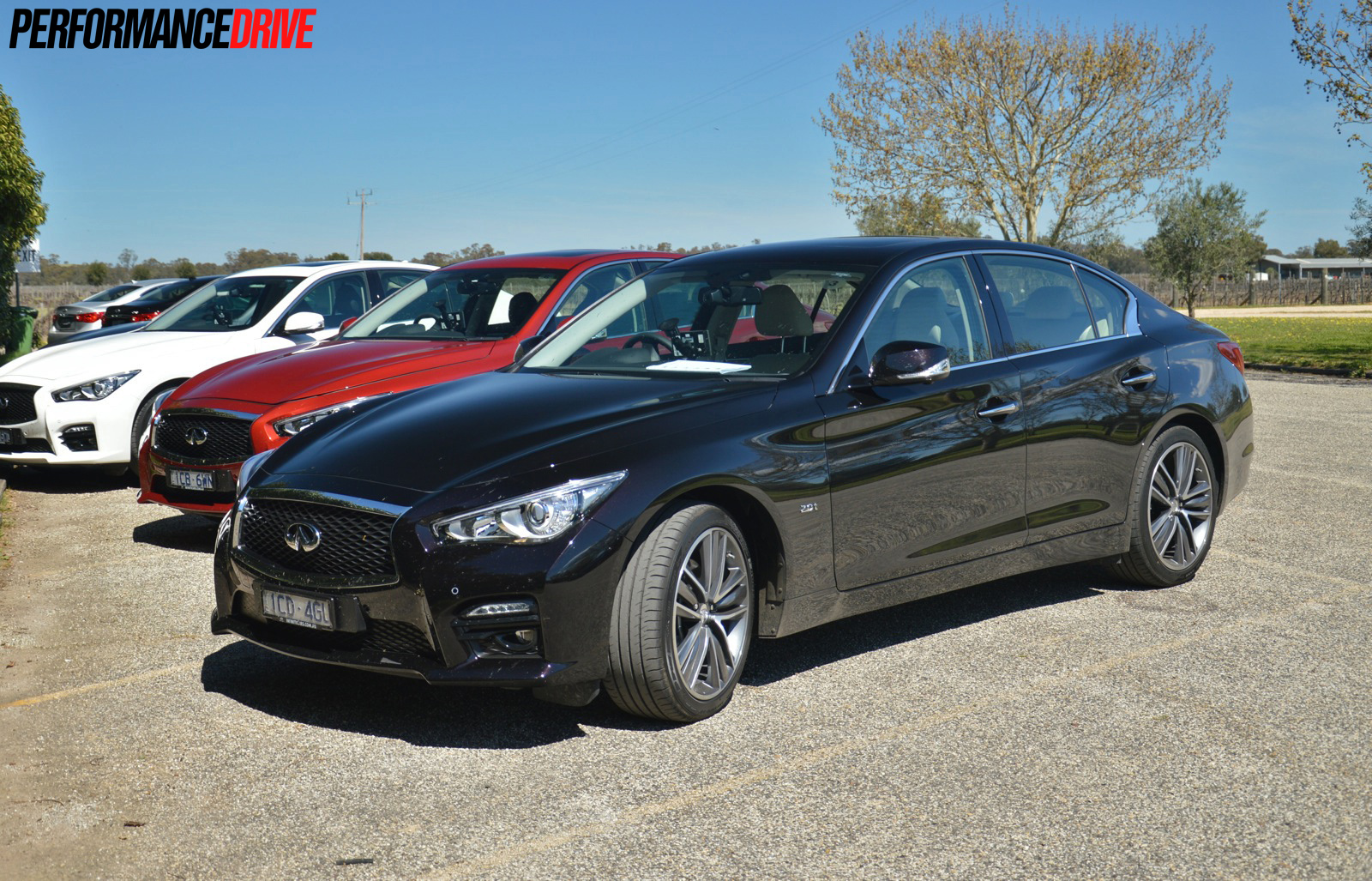 The mid-size premium sedan segment has just got a whole lot more competitive thanks to the arrival of the new Infiniti Q50 2.0t petrol. With an impressive standard features list, good engine power and economy, and the most attractive price tag of all its rivals, could this be the next must-have in latest business attire? 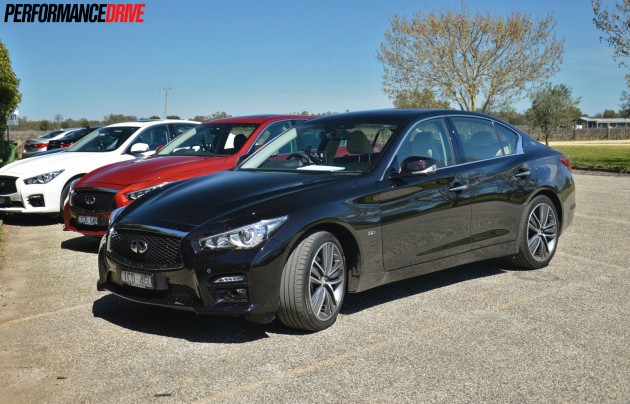 For those that still haven’t heard of Infiniti, this is Nissan’s luxury brand that was introduced in Australia last year – the brand has been around for decades in the US. It’s also currently a major partner of the Red Bull Racing Formula One team – yep, the team with four-time world champion Sebastien Vettel and Australia’s Daniel Ricciardo in the driver’s lineup.

Out of the company’s four-tier showroom range, the Q50 is the best-selling model. It has only, up until now, been available with a 2.2-litre turbo-diesel producing 125kW, or a powerful V6 hybrid producing a class-leading 268kW (for a hybrid). All-wheel drive is an option on the V6 hybrid, while the rest are rear drive.

This 2.0t model gives the nameplate stronger defence against the competition. It’s available in three different trim levels, including GT, S, and S Premium, like the other two variants.

Power comes from a Mercedes-derived 2.0-litre turbo four-cylinder developing 155kW and 350Nm, which is linked up to a seven-speed automatic. In comparison, the nearest-price Audi A4 is the 1.8 TFSI producing 125kW and 320Nm, the nearest BMW is the 320i developing 135kW and 270Nm, and the nearest Lexus is the IS 250 which produces 153kW and 252Nm.

As you can see, the Infiniti is the most powerful entry-level petrol model, but as a tradeoff, it is one of the least economical. We think the specification is a great medium though; you get more than respectable fuel consumption (official 7.3L/100km) without the sluggish downsides of having lower power and torque. If you’re buying a vehicle in this segment this will be one of the important criteria elements that you will need to weigh up.

Infiniti has done extremely well with interior packaging and equipment for the new Q50. All models come with a lavishly luxurious interior with leather-faced seats and power adjustment for the front. These are some of the best seats you’ll ever slump into. Using technology developed by NASA, Infiniti enlisted Yamazaki Laboratory at the Keio University to create a ‘spinal support’ system that offers continuous support from the pelvis to the chest. And in reality, it works. You can spend hours in these chairs without fatigue or irritability. 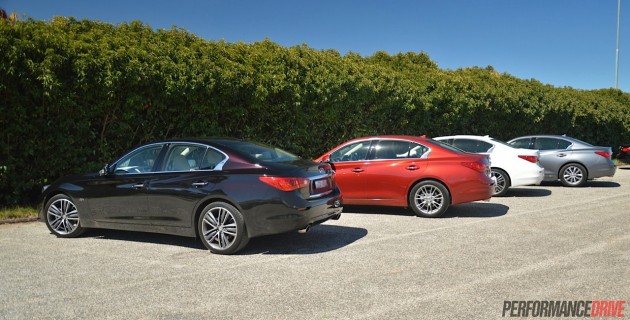 In the back is an ergonomically sculpted bench offering competitive legroom for this class, and good headroom thanks to a slightly extended roofline. The bench can be folded down to access the boot, 60/40 split, while climate vents are located in the back of the centre console for added comfort.

As part of the standard kit all models come with, what we think, is one of the best user interface systems available. Front-seat passengers are treated to two touch-screens with the lower one blended in elegantly within the fascia structure, offering tablet-like functionality. The driver also gets a rotary-push controller down near the gear lever to operate the top screen to help avoid reaching up and diverting focus from the road.

Opting for the S and S Premium gets you a cracking Bose 14-speaker stereo system producing high-end premium sound with staging technology. If you know your electronic gadgets you’ll know about the highly regarded reputation of Bose. While some of the rivals come with high-priced optional stereo systems, we think the Bose system here is easily one of the better units around. The quality is so crisp and clear, it becomes an addictive part of the cabin experience.

Direct Adaptive Steering (DAS) is also a benefit (or not, read on below) of going with the S and S Premium. This is essentially a fully electric steering setup with pre-set and programmable driving settings. You can select the different modes with the GT’s mechanical setup and with the DAS on the S and S Premium by using the driver control toggle. Throttle response is noticeably sharper or less sensitive, and the transmission holds onto gears or changes up sooner, depending on each end of the setting spectrum. 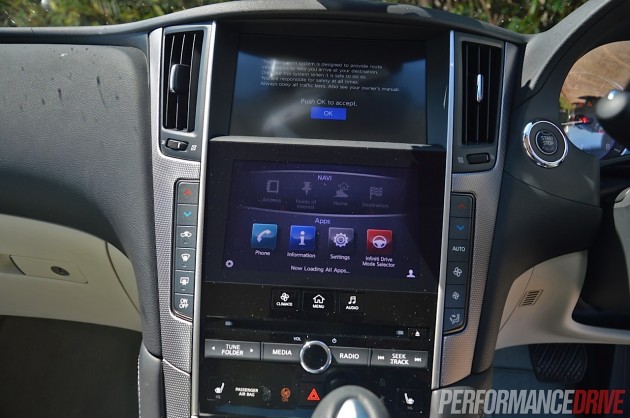 Okay, so enough about the formalities, what’s this machine like to drive?

We drove all three trim levels back to back during the launch event, with the on-board average fuel economy readouts ranging from 7.6L/100km, 8.3L/100km, and as high as 10.5L/100km. You could expect a real-world figure of around 8.0L/100km from what we can tell, potentially lower if you’re a relaxed driver.

The engine feels well-suited to the car in terms of handling its 1646kg tare weight (1671kg for S and S Premium). It doesn’t feel strained or under-powered, and there is no evidence of turbo-lag under normal demands. Maximum torque is available from 1500rpm and up to 3500rpm, which means it doesn’t mind surging up long hills or punching away from slow-speed corners.

Nailing the throttle results in a rapid kick-down from the transmission and quite sudden acceleration. We didn’t get a chance to time 0-100km/h, although the company’s 7.3-seconds claim seems feasible. It will scamper off the mark with chirping wheelspin, especially if the traction control is turned off. A lack of a limited-slip differential means most of the power is wasted away to one wheel.

In the corners the Q50 is a brilliant-handling sedan. The double-wishbone front suspension allows the car to lean purposefully into corners, while dual flow dampers do wonderfully to soak up mid-corner bumps. There’s nothing to complain about in regards to ride comfort either, with an elastic absorb-anything sponge-like feel. Overall, the ride and handling is right up there with the Audi and Lexus models, if a little short from the more enthusiastic and engaging BMW 3 Series.

Where the Q50 can’t match the 3 Series is the steering. The complex Direct Adaptive electric setup in the S and S Premium utilise some great technology. It’s able to cancel out bump-steer and counter-act wind buffering, however, in cancelling out some of the “negative feedback”, as Infiniti calls it, it does mean you’re left with a somewhat sterile interaction. 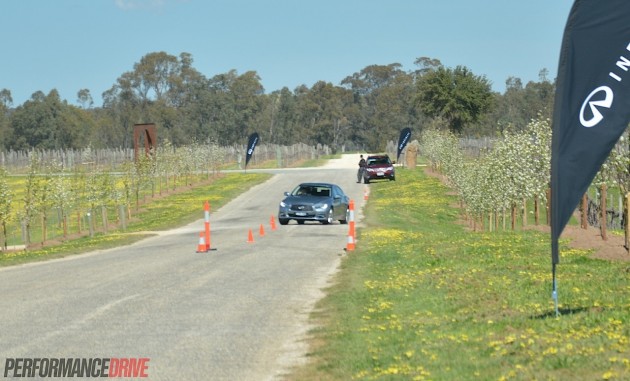 The GT’s mechanical setup is much more enjoyable in our opinion. It communicates more clearly and doesn’t lie to you. It also makes you feel more connected to the car, resulting in a more engaging experience.

Over fast bumps through the corners the DAS does cancel out kick-back, which could be good for the average driver. But for pure performance and enthusiasm, keen drivers will be calling out for that ‘negative feedback’ so they can accurately interpret the drive.

During the drive presentation Infiniti wanted to showcase the difference between the two setups and gave us all a makeshift slalom course to test out the systems, back to back. On our first two tests in the GT (in standard and then sport mode), we could negotiate the slalom accurately, even with the tallish 17-inch wheels and 225/55 tyres.

In the S Premium (in standard and sport), we clipped cones on three out of the four attempts. We put this entirely down to the filtered feedback. And that’s with the more responsive and more direct 19-inch wheels and lower profile 245/40 tyres.

There is nothing concretely negative about the DAS system, don’t get us wrong. Most drivers are going to enjoy the less busy highway driving and the elimination of kick-back and steering jiggle. After all, it does result in a more relaxing drive and therefor a more luxurious journey. We simply think this is a technology that gets closer to autonomous driving and the whole notion of removing the driver-machine relationship.

The Infiniti Q50 2.0t is exceptional value for money. It offers pampering comfort and space, a unique design, technology in abundance, a powerful enough yet economical engine, and all wrapped up in a tight little price tag.