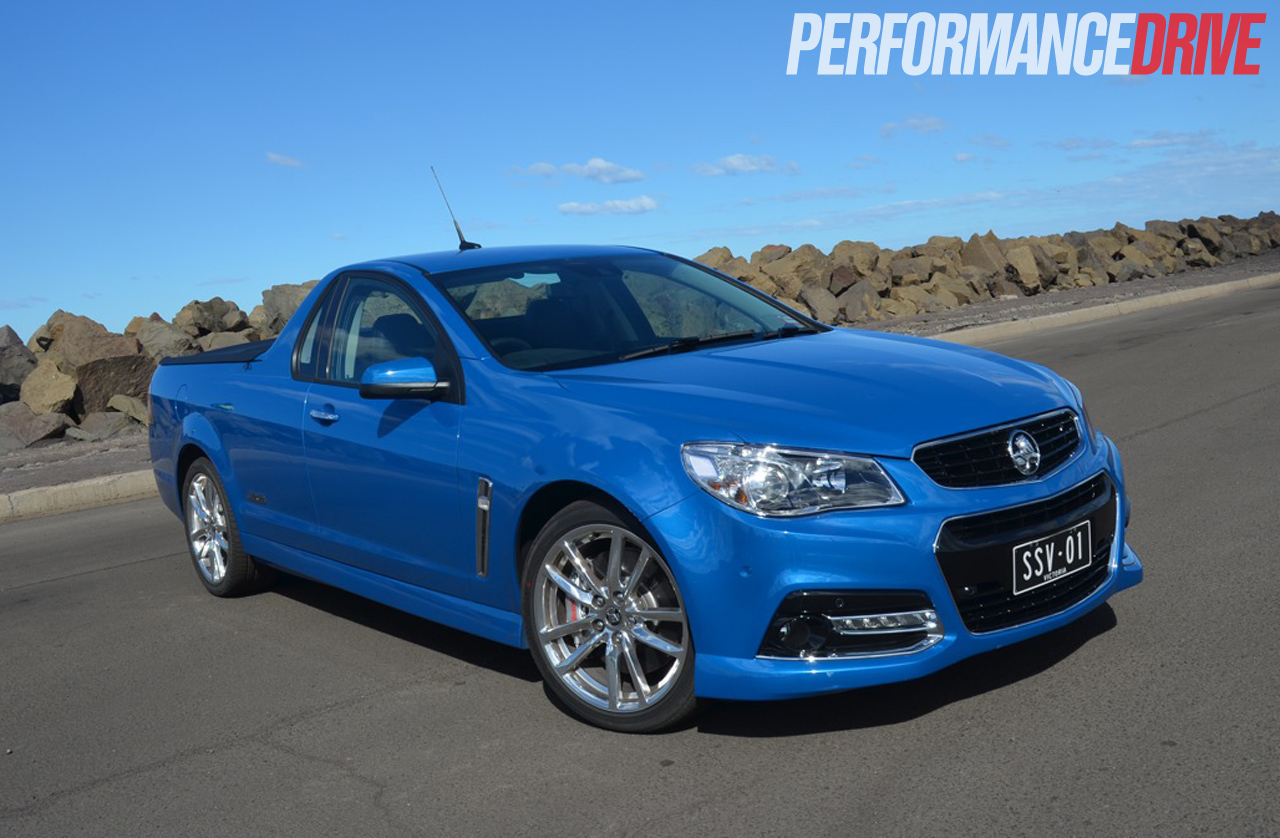 The 2014 Holden VF Commodore SS V Redline Ute is a solid candidate for the best value-for-money two-door V8 money can buy. It has the ability to perform on a racetrack, and the added convenience of carting a load full of tools. Where in the world can you get a Nurburgring world-record holder for less than $50k? Right here in Australia, that’s where. 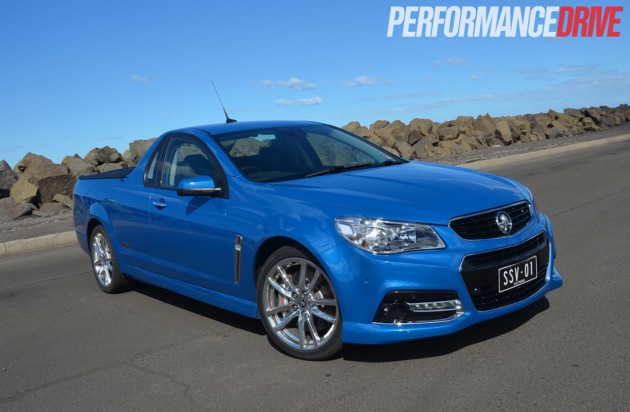 The SS Ute is the cheapest V8 on sale in Australia. Starting from $38,990 for the base model, the price then jumps up to $42,490 for the SS V, and tops out at $48,490 for the SS V Redline (as tested). All VF V8 Utes come with a six-speed manual transmission as standard, with self-shifting six-speed auto models setting punters back an additional $2200.

The new-look VF front end (rear remains unchanged) with LED running lights is just one of the shakeups Holden has performed with its now best-selling model. Other improvements include a completely revised interior that focuses on comfort and technology, an electric steering system that helps to reduce fuel consumption (now 11.8L/100km, down from 12.3L/100km), auto park assist – the first Australian-built car to be fitted with the technology – and significantly lower NVH (noise, vibration and harshness) levels throughout.

Under the bonnet is a 6.0-litre V8 that pumps out 270kW/530Nm in manual guise, but drops to 260kW/517Nm when coupled with the six-speed auto.  All automatic V8 models exclusively feature AFM cylinder-deactivation technology, whereas manual models go without. 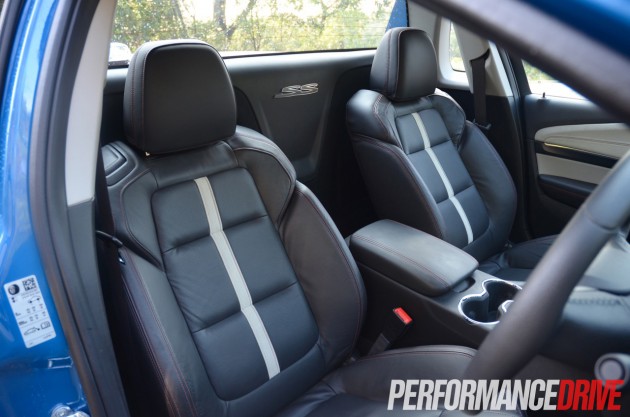 All Redline models come with Holden’s new ‘Competitive Mode’. This sharpens the steering and adjusts the stability control so you can get more out of your V8 brute when driving on the limit. It’s ideal for use on the track, or a secluded twisty section of road.

Competitive Mode also introduces launch control; the first ever Holden to be fitted with the technology. It’s standard in both manual and automatic Redline variants. Once engaged, come to a complete stop, select first gear, stomp the throttle, wait for the revs to settle to 4000rpm, and dump the clutch (or brake pedal in the auto model) and off you go in a ‘controlled’ flash. Competitive mode can be turned on by pressing the traction control button twice.

The VF’s new improved interior is world’s ahead of the aging trim it replaces. Although the VE Series II was a little more refined than the original VE, the VF’s trim is something else.

Sitting inside the Ute you instantly get the feeling this is a good place to be. The cabin is roomy, fitment is tight, and the materials are easy on the eye and skin.

From the stitchwork on the dash to the suede strip on the seats, the trim comes together to give the Commodore a premium vibe. Never has an Australian-built car looked or felt so swank. There’s the odd scratchy plastic surface here and there, and you could argue that the chic bits and pieces will probably get grubby quickly, especially in a utility, but if it means you have to clean it more often or take better care of it, then so be it. 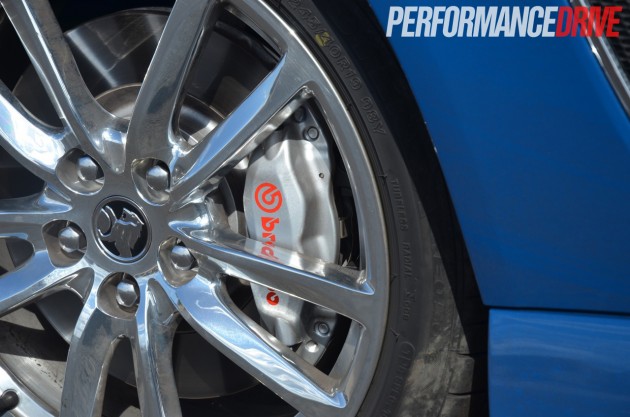 Looking over the car’s exterior you’ll notice the rear maintains the same look as the VE but the front end is significantly different. The new contoured aluminum bonnet, another first for an Australian-made car, blends with the front bumper and guards very well to give the VF an unmistakable Holden-esque presence. LED daytime running lights are standard and give the VF some modern appeal.

Being the most expensive model in the lineup, the SS V Redline comes with a set of Brembo brakes with 355mm front discs, 19-inch forged alloy wheels with a staggered fitment, and FE3 sports suspension.

New to the VF is Holden’s MyLink infotainment eight-inch LCD touch-screen. Sitting at the top of the dash, it is the centrepiece of the cabin. The unit is standard on all VF Commodores and comes with a vast range of features. The buttons on the unit are easy to read and operate. Some of the built-in functions featured on the MyLink system include Pandora and Stitcher application-based music players, Siri Eyes, Bluetooth support, and USB/MP3 playback.

Safety-wise, all VF Commodores and Utes achieve a full five-star ANCAP safety rating. The cabin is fitted with side, curtain and front airbags. Driver aids such as stability control, blind-spot warning, reverse traffic alert (beeps to let you know if traffic is coming when you’re backing out from a car spot) are all standard on the Redline model.

Like all VF models, the SS V Redline Ute has the ability to find a parking spot for you, and then park itself… almost. All you need to do is press the auto park assist button and drive forward until the built-in scanner finds you a suitable park. As soon as the car detects an available spot, the system will beep and ask you to stop and select the necessary gear/s. All you need to do then is operate the brake and throttle accordingly – the steering is done for you. Nine times out of ten, we found the system to do a top job . It’s only when you come to an awkward spot that it struggles to swing the car neatly into position, leaving you to do things the old-fashioned way.

Gone is the VE’s ugly and weird handle handbrake. It’s replaced with an electric switch located in the centre console. This is another piece of technology that takes some getting used to, but nonetheless makes the driving experience a little more fluid and frees up some space. 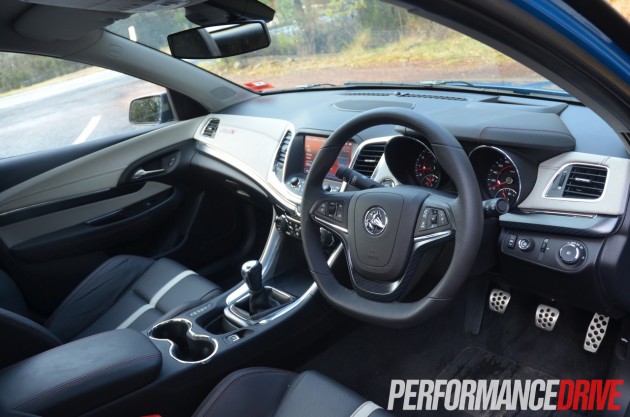 When Holden launched the SS V Redline Ute the company confirmed it tested it at the Nurburgring in Germany. It lapped the world-famous circuit in just 8:19:47. This is a world record for a commercial/utility vehicle.

To achieve the cracking time, Holden put a lot more emphasis on the performance side of things with the VF Redline, with uprated suspension components and geometry, a more serious tyre and wheel package, along with the performance driving modes.

The new electric steering system provides the driver with plenty of feedback and is one of the more communicative electric units on the market. It’s well-weighted in the corners, and feels sturdy at freeway speeds. It’s also a breeze to use when driving in city conditions.

Unchanged from the VE II SS V Redline is the 270kW 6.0-litre V8. The engine doesn’t come alive until midway through the rev range, but from there on it’s old-school push-rod grunt all the way to redline.

The engine loves to use all of the available revs, rewarding you with more noise, and faster acceleration the longer you wind it out. One downside to the VF’s power curve is the lack of bottom-end torque. You can find yourself trying to pull out of a side street in a high gear, only to shift down one or two cogs just to get things going again. 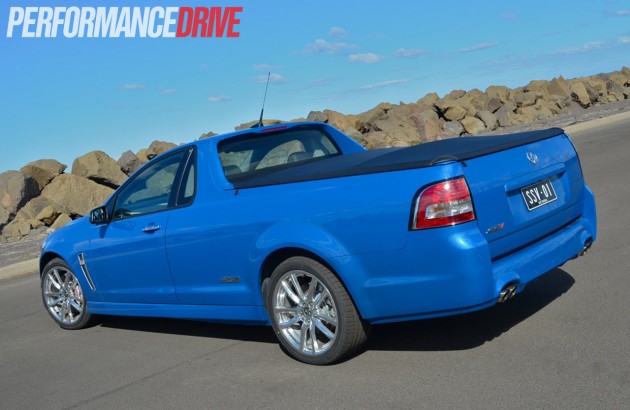 Which brings us to the six-speed manual transmission. The clutch throw is long and mildly heavy. It does provide good feel, though. The chunky throw of the stubby gear knob adds to the theatrics of the big V8, making it feel every bit the muscle car it is. The ‘box can be a little bit stubborn on downshifts, but you get used to it after a while – three weeks of driving this and you’ll develop muscles in your left arm you never knew you had.

Using the VF’s new launch control system we previously timed 0-100km/h in just 4.8 seconds in the sedan version. In the Ute we managed 5.3 seconds. For what’s designed to be, a car that you can throw hay bails in the back of, it’s damn impressive.

The Ute is more than happy to be tipped into bend after bend, all while feeding it lots and lots of throttle thanks to excellent levels of grip available from the 255mm front and 275m rear tyres. It does suffer from a hint of understeer but you get plenty of warning beforehand. Controllable powerslides are only a throttle-prod away.

Visible behind the forged alloy wheels are a set of Brembo calipers that live up to the famous brand’s reputation each and every time you push the pedal. We tried our best to upset them, but they replied with confident and powerful braking. If we had one complaint about the braking it would be the pedal feel. It is a little spongy, however, this doesn’t detract from the overall braking performance. 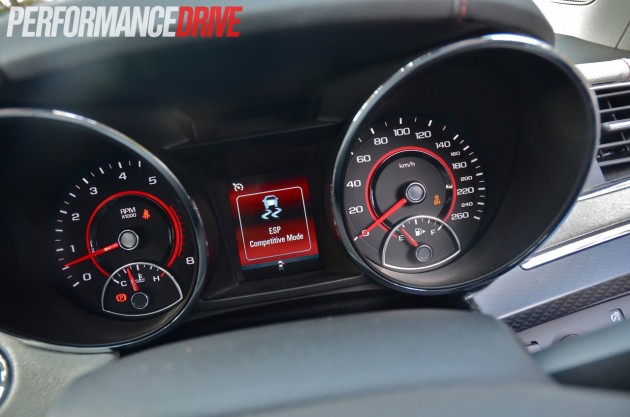 There would only be a handful of utes in the world that can put a smile on your face like SS V Redline can. From the abundance of grunt, to the sharp steering, to the plush interior, everything about the way it drives feels sporty and engaging.

The SS V Redline Ute is a staunch V8 performance car that’s versatile for various styles of work, weekend getaways, with the ability to kick some serious butt at a track day.

Fast forward 10 years and we bet out last dollar performance car enthusiasts (us included) will miss these great V8 utility vehicles. They’re loads of fun to drive. And the good news is, they won’t become extinct until 2016.

CONS:
– Worth $9500 more than the base SS Ute?
– Mostly unchanged rear end design from the VE
– Fuel consumption can quickly get out of hand 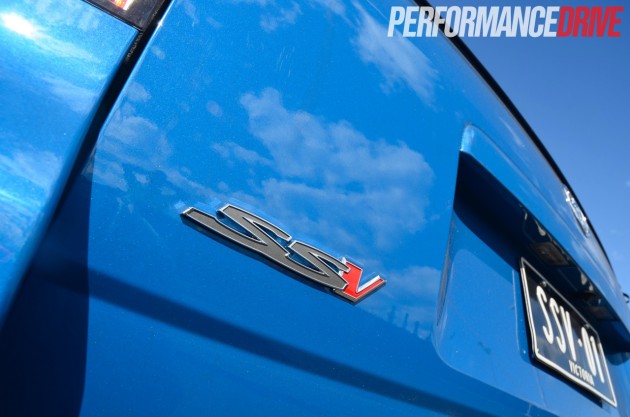