Like a stainless steel fist punching onto the table of the large SUV market segment, the 2013 Volkswagen Touareg V6 TDI promises strong off-road capabilities with a premium quality edge, and dashes of prestige and luxury. The V6 TDI variant was up until recently the flagship Touareg, but it’s now been overshadowed by the 250kW/800Nm V8 TDI R-Line. Even still, the Touareg is Volkswagen’s largest and most expensive model sold in Australia.

Sitting at the top end of the Volkswagen food chain means the Touareg is a showcase of the company’s latest developments in efficiency and equipment.

The current, second generation model went on sale in 2010. It introduced a number of industry benchmarking features, such as fully adaptive headlights with beams that not only pivot and span with your direction but also change shape to reduce glare, as well as advanced stability control and ABS to suit loose surfaces, and a number of technical highlights such as a locking centre differential and optional height adjustable air suspension (standard on the V6 TDI).

Prices for the V6 start at $79,990, which is not bad for an equipment-packed, premium large SUV. It sits in the market slightly cheaper than its main European rivals, and a touch more expensive than its nearest Japanese and Australian competitors. 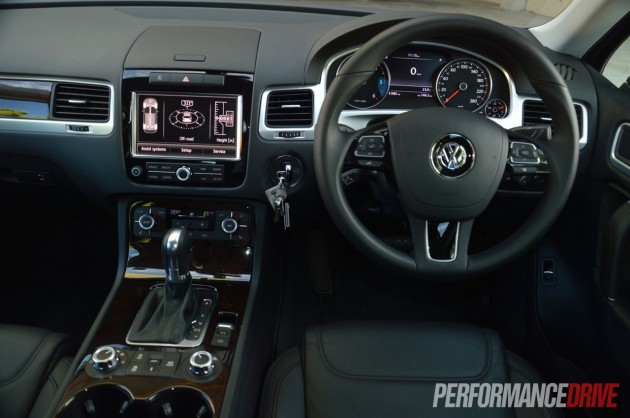 The V6 comes with an extensive catalogue of comprehensive off-road tackle, including ride height adjustable air suspension capable of lifting or lowering the SUV (ground clearances of 160mm to 300mm), an electronic centre differential lock for maximum traction, and various damper (comfort, normal, sport) and driving (on road and off road) modes.

Inside, the cabin reminds us of an office waiting area. It’s pleasant and very roomy, with durable-feeling leather seats, mostly black materials and surfaces, and all complimented by a smattering of silver alloy-look controls and switches.

The cabin is very easy to live with, with ample space front and rear to accommodate up to five adults. It’s neither cluttered or confusing, in fact, if anything, it’s a little bit boring and overly conservative.

All of the media and vehicle settings are controlled through a touch-screen interface which also includes satellite navigation and an on-board hard drive for media storage.

In the back, the cargo area is huge and flat, and capable of swallowing up to 580 litres. Flip the rear seats down, which can be done via an easy handle on the side of the seats or by simply pushing a button in the back, and you’ll open up 1642 litres. 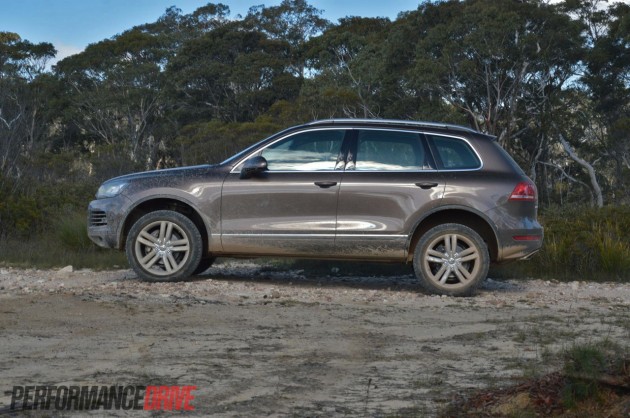 Although this is not the most powerful flagship variant, the V6 TDI delivers up bags of torque. The force comes thanks to a heavy-duty 3.0-litre turbo-diesel V6 developing 180kW of power and a mountain-moving 550Nm of torque.

The torque delivery is immense. It’s so unyielding, pulling through the gears like it’s on a rampage mission. It sounds good too, giving off a deep V6 thrum that climbs into a nice snarly growl – there’s very little diesel clatter.

In a straight line, the Touareg really lunges off the mark with almost gut-wrenching levels of heave. It feels sporty, much more sporty that what you might expect from a big SUV. And the numbers match the feeling too; we timed 0-100km/h in an impressive 6.9 seconds.

Low end acceleration and pickup is great, partly thanks to an evenly spaced set of ratios in the eight-speed auto gearbox, however, there is turbo lag under certain demands. It’s not that the engine doesn’t shift you on its own, the turbo simply dumps in boost for more oomph.

The gearbox isn’t the usual DSG dual-clutch job that Volkswagen is renowned for, and it’s not as quick to change as one either. We found no problem with its performance though. It swaps cogs quick enough, and smoothly, and at the right time.

Volkswagen vehicles, despite being highly regarded and praised for German engineering and quality, can be a bit on the boring side. That’s not really the case with the Touareg on the road. It might look like it plays back gammon in the evenings, but it is quite energetic and joyous when pushed. Part of this is down to the underpinnings.

It’s built on Volkswagen Group’s PL71 platform, which also underpins the Audi Q7 and, more importantly, the Porsche Cayenne, so the genes are certainly there to accommodate sportiness.

When the adaptive dampers are set to sport mode there is hardly any body roll. The big 2159kg bovine gallops rather eagerly around corners with good composure. Even if you have the adjustable suspension set in its highest setting, the dampers and body stability remain mostly unfazed.

Where the handling and driving character could be improved is in the steering. Volkswagen vehicles often have a solid and planted feel, as well as a steering system which seems like it’s set in concrete. In the Touareg, the steering feels weighted and meaty, and a bit numb, particularly at lower speeds.

Wind up the speed and tackle some bigger, sweeping bends, and the Touareg more than redeems itself. It can be danced down a set of S-bends confidently and with good interaction and driver engagement. The suspension does well to iron over bumps very well too, leaving for a relaxing and comfortable highway cruiser.

Overall, it’s not quite as nice to drive as say, a BMW X5, but then, the Touareg is more serious than the X5 when it comes to off-roading. Or at least it seems that way when you see all of the gadgets at your disposal. 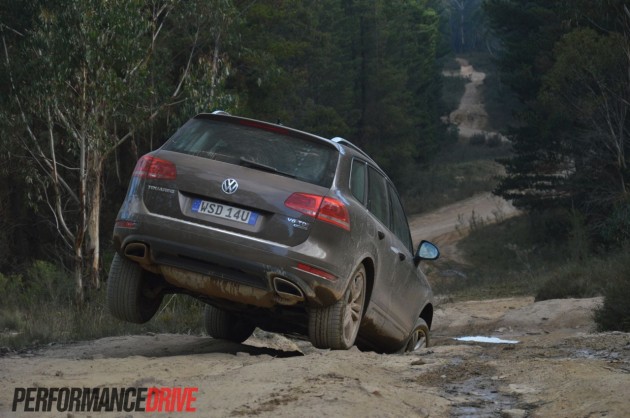 Despite seeming like a macho off-road-ready machine, the Touareg isn’t exactly a class star when it comes to rugged terrain. It endlessly tripods its way over even mild conditions, with the statement-making raise-able air suspension in its highest setting.

The lack of suspension travel means all four wheels aren’t making best use of the engine’s torque, leading to less traction. Fortunately, the button-operated centre differential lock comes into its own in these situations. The centre diff locks up the front and rear wheels, whether they are in the air or not.

During our off-road tests, the Touareg pulled through most obstacles we threw at it. A number of times it needed to be encouraged through the rougher stuff, and some conditions needed to be re-attempted to get through.

It’s off-road performance is a little confused. On one hand it’s the company’s biggest and most serious off-road vehicle with all of the technical gadgets, however, if these components weren’t fitted, it would be a below-average performer.

The low profile tyres fitted to the standard 20-inch rims don’t help, and the body and underbody is not as well prepared or protected as most SUVs from Japan and Australia.

Germany makes a great road car, but when it comes to adventurous multi-terrain duties, the Wolfsburg company still has a few things to learn in our opinion. 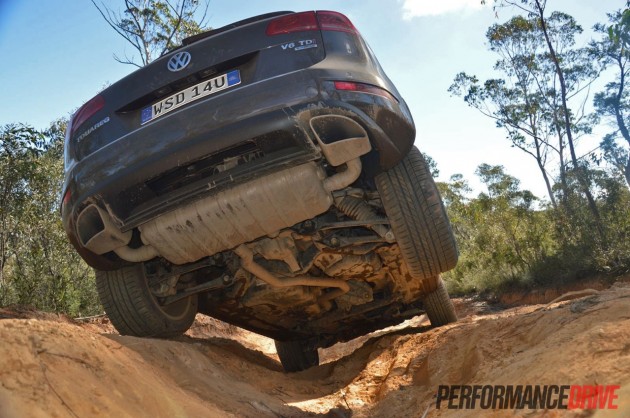 We could go on to recommend this vehicle because of its off-road techno, but we’re not. If it didn’t have adjustable suspension and didn’t have a centre diff lock, we feel it would be an SUV with mediocre capabilities. It needs the techno toys to pull it over the line.

What we do back 100 per cent is the super user-friendly and comfortable cabin, the engine’s efficiency – 800km to a tank is easy – and, more significantly, its higher speed driving character and stability, and the engine torque.

This is a potent SUV with credible, sports car-like performance. And with that herculean torque output, if you find a mountain it won’t climb over, simply hasp on a snatch strap and tow the bastard out of the way.

If you’re after a premium family wagon that’s powerful enough to lug you and the family around, and a boat and/or caravan if need be, the Touareg V6 TDI delivers wonderfully. It’s also reasonably priced compared with its European rivals.

CONS:
– Lack of suspension travel hinders off-road performance
– Steering not quite as nice as the handling; it should compliment the good chassis dynamics
– Tyres not suitable for off-road; needs stiffer side walls
– Some turbo lag 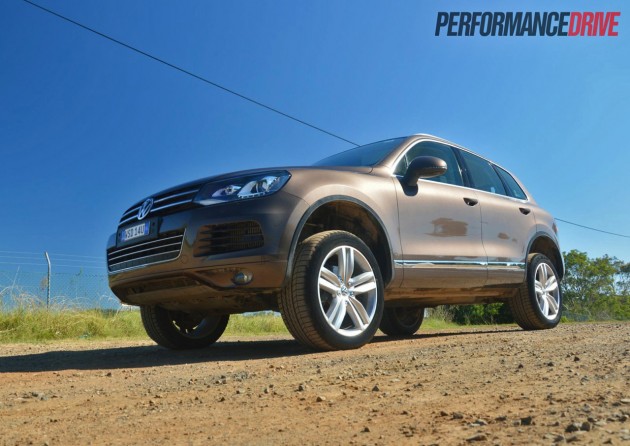 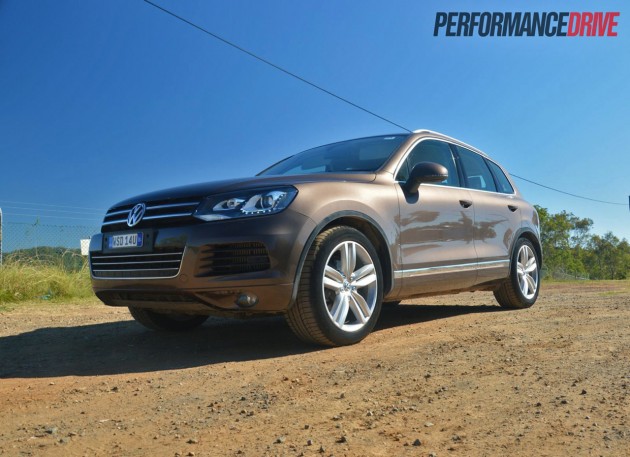