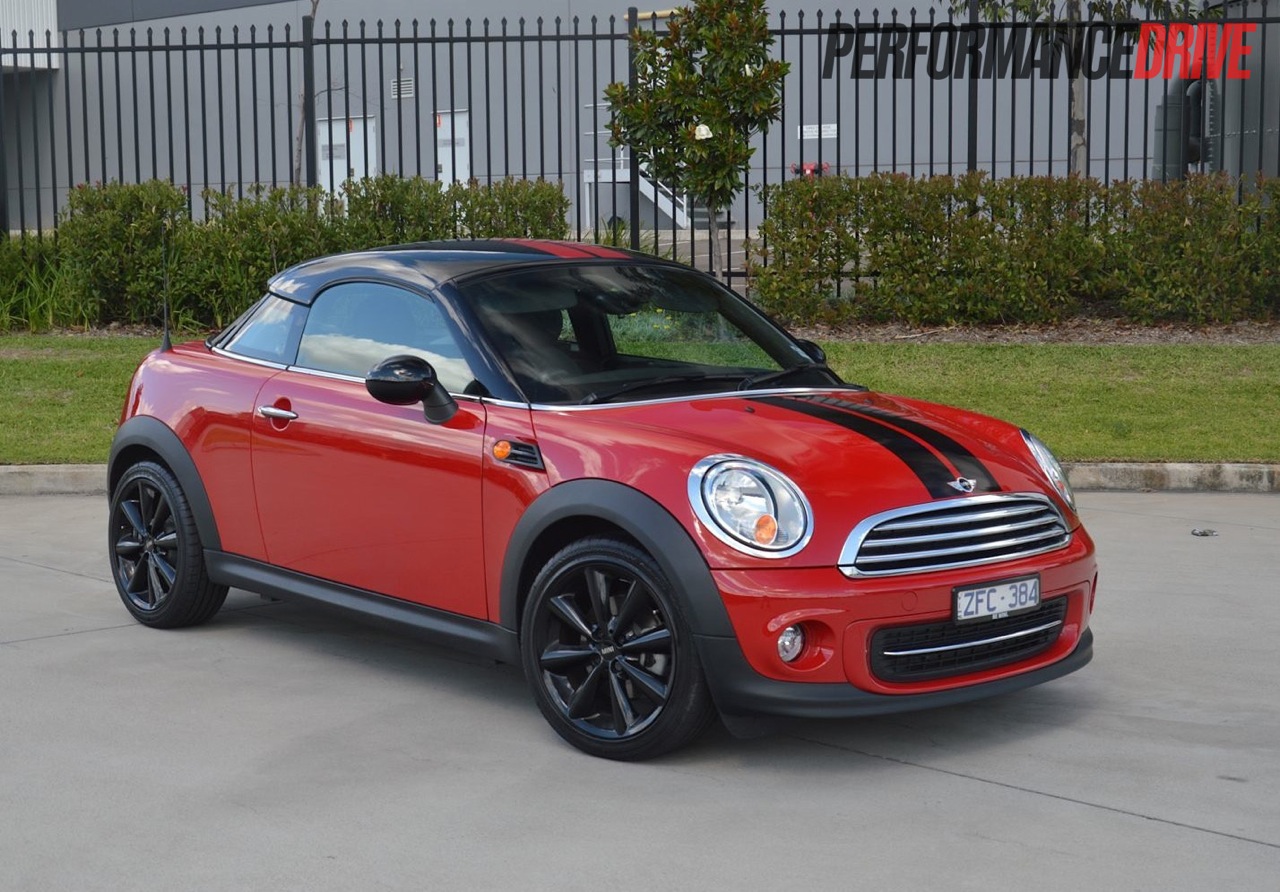 The BMW-derived MINI has always had a streak of punk in its blood, with it’s loud retro styling, super-agile handling, and potent range of engines. Even the original Mini Cooper was a bit of a smart arse in its day, causing lots of (winning) trouble in various motorsports fields. As an evolution and amplification of these traits, we arrive at the 2013 MINI Coupe Cooper. 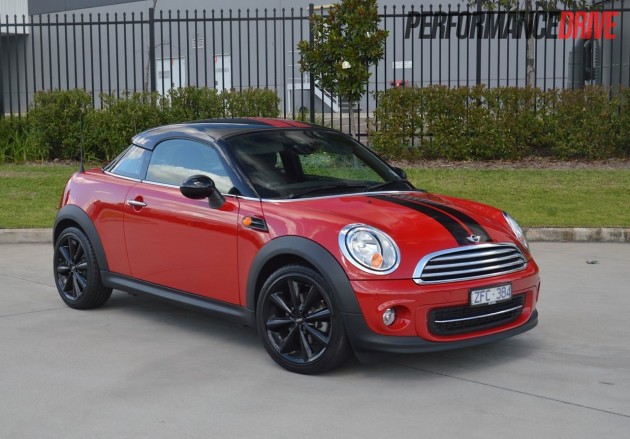 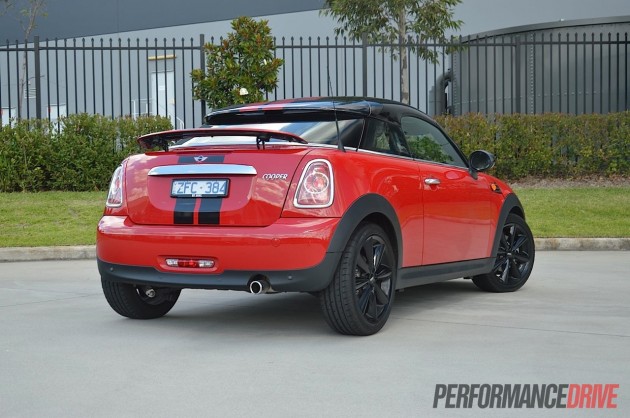 The MINI Coupe is the smallest and funkiest MINI on sale, if you can’t already tell. It, as the name suggests, showcases a swept-over two-door coupe shape, as opposed to the regular three-door Cooper hatch.

It’s an even more agile and nimbler take on BMW’s reincarnation of the original Mini Cooper from the 1960’s, and it’s given a sporty ‘cap-backwards’ attitude – and look – with a larger and more convenient hatch and boot space in the back. A host of sporty highlights are also thrown in for good measure.

Under the bonnet sits a naturally aspirated 1.6-litre four-cylinder engine. It’s also seen in the Cooper ‘S’ version with a turbo bolted onto it. In the Cooper it produces 90kW of power and a reasonably forceful 160Nm of torque.

Prices are fairly steep for a car of this size, kicking off at $34,900 for the manual, and $37,250 for the automatic version. You do get a lot for your money though, and in particular, a lot of driver-focused engineering which comes thanks to BMW. 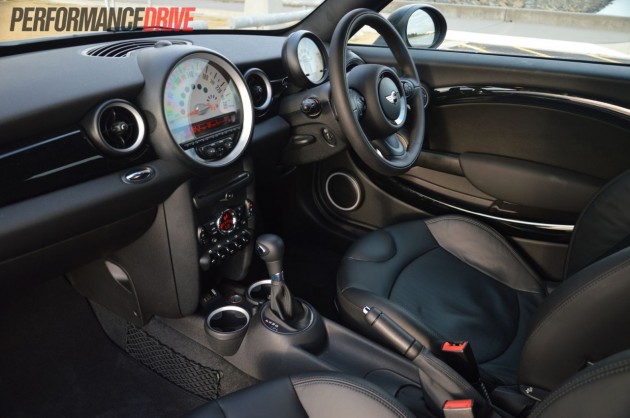 Interstate road-trip accommodation is obviously not what this car is about. It’s small inside, there’s no doubt, but the engineers have set up the car and the interior quite ingeniously. It’s not claustrophobic as one might assume. The dash sits well forward, just ahead of the windscreen in fact, and there’s no giant centre console that rises up from the centre, cocooning in place.

The driver’s position is almost spot on, and the seat can be slid back to cater for taller drivers. Headroom is a bit low, despite the two cutaway Zagato-style bulbs in the ceiling. Getting in and out will also require you to bend down like you are getting into a low-cut supercar. 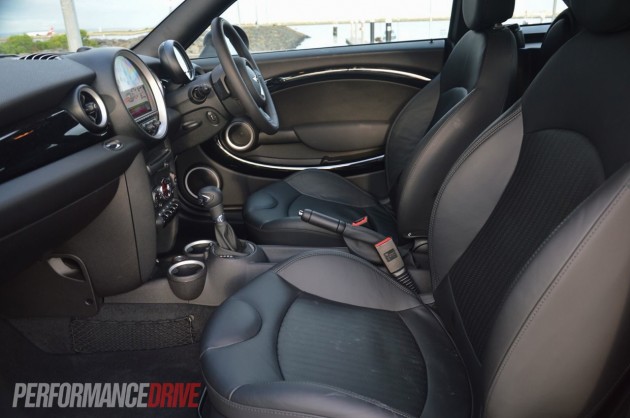 It’s fun though. There’s a certain occasion, an experience that accompanies jumping into the MINI Coupe’s cabin. It feels like there is a degree theatre going on, even before starting the engine and going for a drive.

All of the controls and switches are either chrome-plated or designed in a cute or funky fashion, and there are loads of aviation-style toggle switches on the dash. The toggle switches are also used on the ceiling, including one particularly cool one which allow you to switch between different mood lighting colours; red, blue, purple, green, orange, and so on. 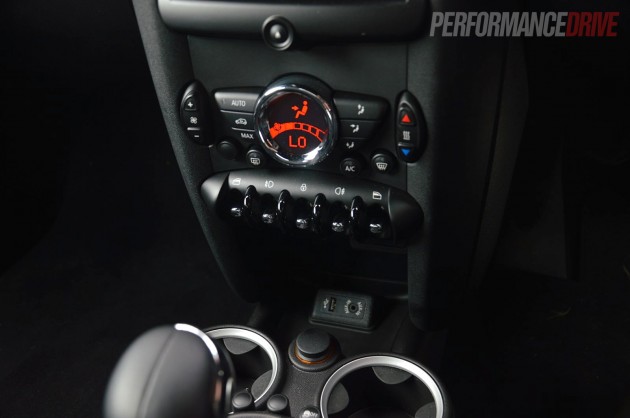 In terms of standard features, the base model Coupe comes with the trademark (for modern MINIs) giant centre speedo which encompasses the audio display, ignition lights and fuel gauge. It’s cool, and with chrome rings circling most dials, there’s a definite retro character scattered about.

In the very back, the Coupe actually offers more boot space when compared with its bigger Cooper hatch brother. The Coupe offers 280 litres while the hatch offers just 160. On the contrary, the hatch does have rear seats which can be folded down to open up 680 litres. As for the Coupe, there are no rear seats. It does come with a handy shelf just behind the front seats which can be used for light luggage or a gym bag, for example. 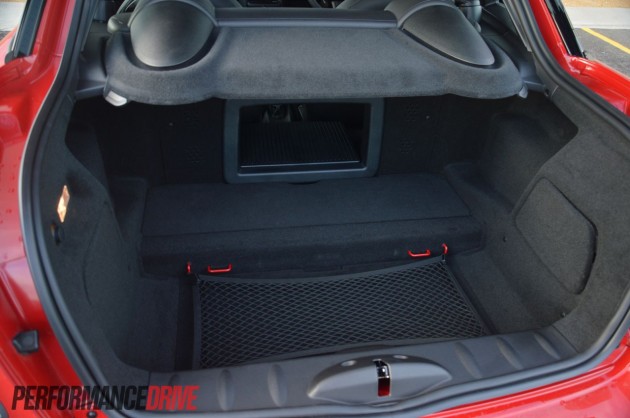 The Coupe isn’t what you would call conservative. It stands out no matter where you take it; the city, the petrol station, or even simply popping around to visit your parents, someone is very likely to comment inquisitively.

Part of the appeal is down to the bodykit, the electric spoiler which MINI says adds 40kg of downforce at high speeds, and the alloy wheels, all of which come standard. The basic 16-inch alloy wheels look great, however, the optional 17-inch ‘Conical’ items (as tested) seem to fill the guards a bit better and give it a sportier almost aftermarket look. Especially in black.

This particular test vehicle is made more sporty thanks to the black racing stripes over the boot and bonnet. These match the black roof and side mirrors  – all up a $390 option. 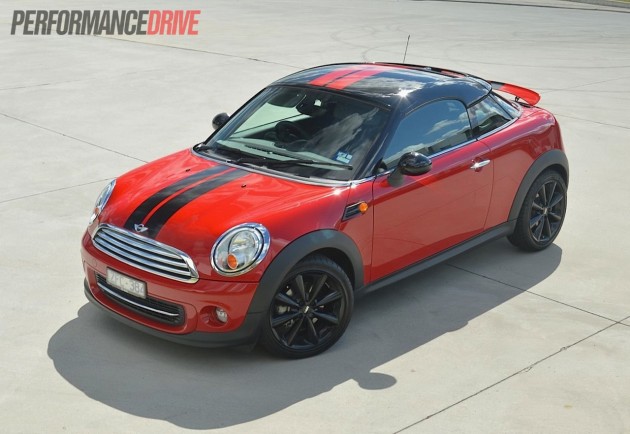 In terms of safety, standard features to keep you out of trouble include dynamic stability control, ABS brakes with Corner Brake Control – brakes that are capable of slowing individual wheels to help pivot the car around corners – as well as four airbags and a runflat tyre indicator. Interestingly, dynamic traction control (DTC) is optional ($390) on both the Cooper and Cooper S.

The DTC system does include an electronic differential lock though, which takes things to a new level. If it’s any consolation, we experienced no issues with acceleration traction during our test, although, wet roundabouts tend to provoke early understeer, whether you’re on or off the throttle.

Australia’s ANCAP people haven’t actually tested the two-door Coupe model. It has previously tested the Cooper hatch and given it the full five stars. 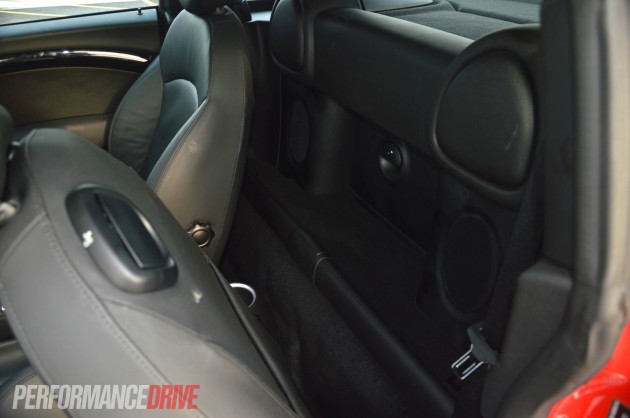 Floor the throttle off the mark and the Cooper and its energetic little 1.6-litre engine accelerates its way to the horizon with an angry, rally-car-like bark. We timed 0-100km/h in 10.8 seconds, which is hardly back-breaking, but it does feel quicker than what the stopwatch says.

It might not be an absolute powerhouse, but the engine does provide a surprisingly torquey mid-range, with maximum torque coming in from 4250rpm. And since the car is so small and relatively lightweight, weighing 1135kg, you don’t actually need a load of power to have some fun.

The six-speed auto is matched very well to the engine. It doesn’t hunt around for gears, as one might expect with a small engine like this, in fact, it often likes to hold off on auto downchanging and instead make good use of that mid-range torque. Once you’re up and running, you find yourself hitting the national speed limit quite easily and quickly. 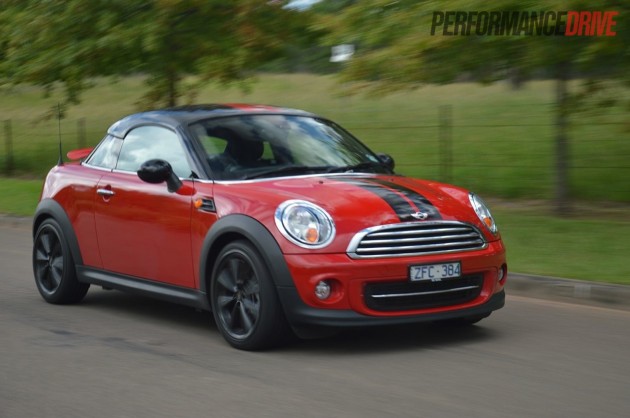 Through turns and twists is where the MINI Coupe Cooper really shines. It’s so nimble and capable. You can really feel the BMW engineering – suspension geometry (independent rear) and low centre of gravity – working its magic underneath. Even if you underestimate corners and start to push the tyre’s limit of adhesion, you can actually get the tail to squirm around a bit with high conviction, despite the short wheelbase and almost square footprint – usually a recipe that encourages automotive pirouettes.

With a higher performance Cooper S version and a serious John Cooper Works version sitting above this entry-level Cooper, the overall driving dynamics are above and beyond this less powerful variant. The brakes, suspension, and steering and chassis balance are sublime.

The suspension, while a touch firm – a feeling that’s partly influenced by the short wheelbase – takes a hard beating before it comes close to bottoming out. This confidence and ability plays an important role when you take on some higher spend bends and sharp curvy dippers, as a small car like this is a lot more prone and susceptible to being thrown about. The MINI takes it all in its stride. You can enjoy such conditions and appreciate the fact the car has been developed to handle it. 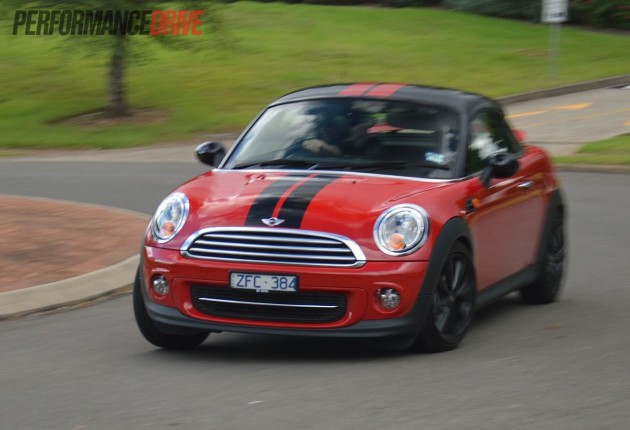 If you’re after a small car and feel the urge for something a little different, something a little funky, but also something that’s high in quality and capability, the Coupe Cooper is a car you should test drive. It offers all three of these traits in perhaps the most upper of levels available on the market.

While this naturally aspirated Cooper version does offer reasonable power and decent mid-range torque, we would have to go for the turbocharged Cooper S version if it were our choice. Considering the official combined cycle fuel economy for both the turbo and non-turbo auto is 6.7L/100km, there’s little point in going for the latter we feel, aside from the insurance premiums of the turbo.

The Cooper S (as tested last year) feels like it doesn’t have to work quite as hard as this non-turbo version to get things going, and as a result, fuel economy in the real world is actually better in the Cooper S in our opinion. 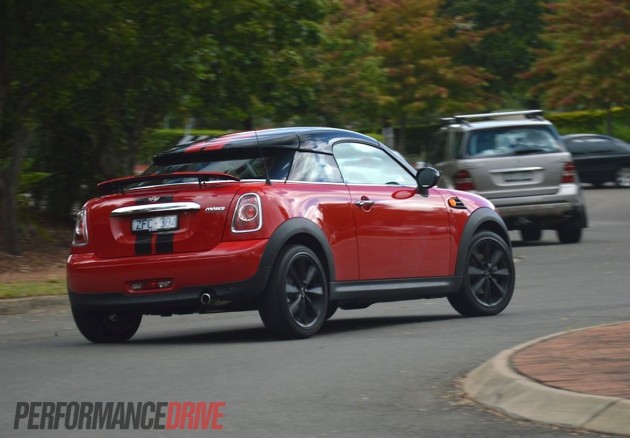 (While there aren’t any true rivals in this segment – compact coupe – competitors below are selected based on their naturally aspirated engines and not necessarily on price.)