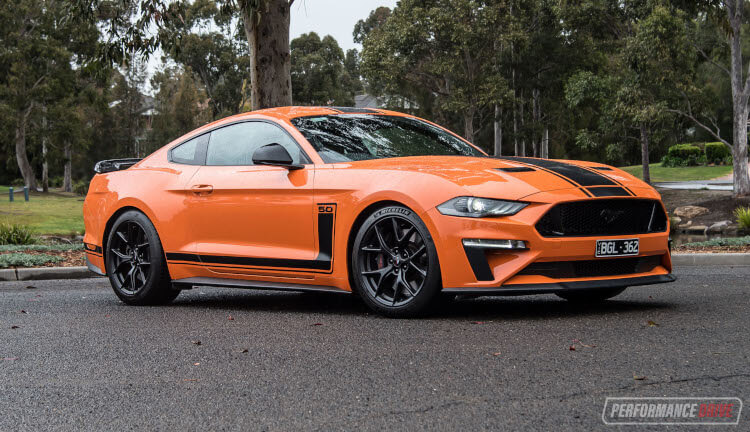 Meet the incredibly powerful and respectfully ridiculous Ford Mustang R-SPEC. This is a special creation by Ford Australia, for the Australian market only. In short, it is the most powerful production car Ford Australia has ever offered.

We’ve always missed out on the awesome Mustang GT350, and the GT500 for that matter. But that’s where the R-SPEC comes in. It features a 5.0-litre V8 with a Ford Performance supercharger bolted on, and a Herrod Performance exhaust system for good measure. All up, that’ll be 522kW, thanks.

Only 500 of these manic machines are being offered. Production initially began last year, but as COVID-19 swept through the local production facility pushed pause to produce around 200,000 face shields for healthcare workers – a superb display of Aussie spirit. Work recommenced on the R-SPEC in June.

Prices start at $99,980 (excluding on-road costs). Now, that does seem like a lot. But you’ll be hard pressed to find better value on the market in terms of horsepower per dollar. 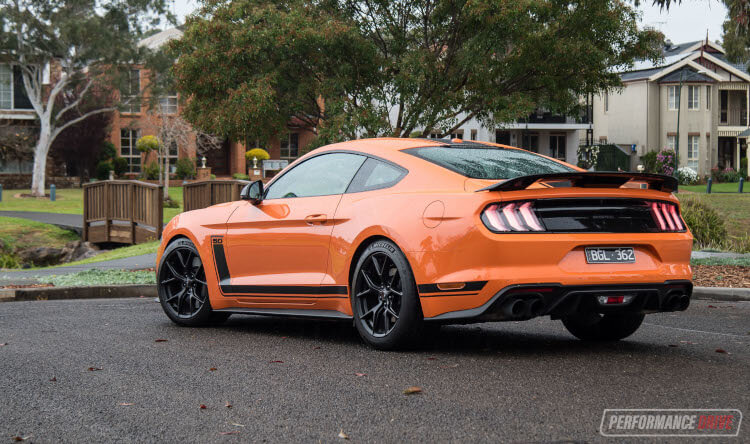 The R-SPEC is based on the regular Mustang GT V8, and the interior definitely reflects that. This test car features the optional ($3900) Recaro leather sports seats in the front, but as standard you get similar items with heating and cooling. Going for the optional ones actually removes the temperature control, but this likely saves some weight.

On the dash is Ford’s 8.0-inch touch-screen media interface running SYNC 3, offering Android Auto and Apple CarPlay support, along with digital radio and in-built sat-nav. We’re not a big fan of the colour scheme of the interface or some of the in-screen menu buttons, mainly because it’s all a bit mono-tone and some functions aren’t well highlighted. But it does pack everything you’d expect from a modern car. 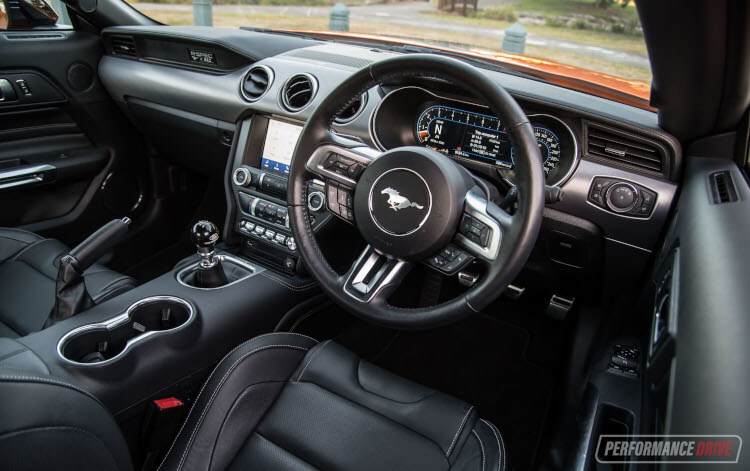 The R-SPEC also comes with a 1000W 12-speaker premium sound system by B&O, complete with an amplifier and a boot-mounted sub-woofer. This is great as you’re able to hear your tunes over the grumbling engine, no matter how hard you’re driving. In all seriousness though, the system does produce really high quality notes, with huge bass (if you want it) and crisp clarity.

Rear seat space is pretty tight. If the front passengers are willing to slide forward a bit the legroom is tolerable. But headroom is going to be an issue for average-height adults and above. Your head sits right beneath the rear windscreen too, which means, on hot days, the sun beams straight onto you. This doesn’t bode well for overall comfort. We guess our main gripe here is that the Mustang is quite a large-proportioned coupe on the outside, so you tend to expect more space back here. 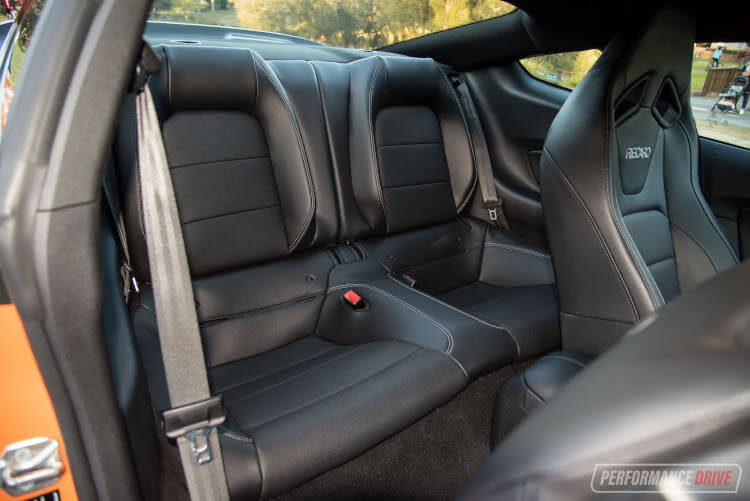 The boot is much more like it, opening up to 408 litres. Although you do have to contend with the sub-woofer, the load space stretches deep and spans fairly wide. According to VFACTS the Mustang’s competitors are the Toyota 86/Subaru BRZ, Mazda MX-5, and Hyundai Veloster. And in that regard, the Mustang has them all licked in this department.

Our main criticism with the interior and packaging is that there’s really only the Ford Performance gear shifter and a special build plaque on the dash to identify this as the R-SPEC. It would have been nice to see more exclusive highlights around the cabin. And on that note, it doesn’t really seem like a $100k vehicle. From the inside anyway. 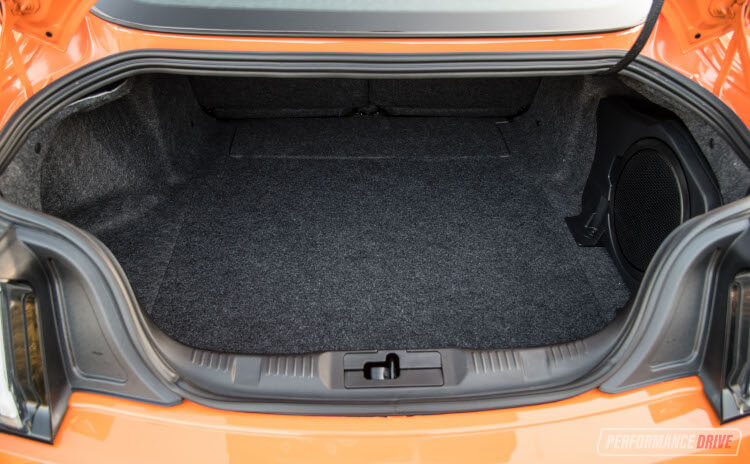 The engine is based on Ford’s 5.0-litre Coyote V8, receiving the Ford Performance 2650 (2.65L) supercharger kit which runs at up to 12psi. Fuel is injected via traditional port and modern direct injection, and the intake air is cooled via an aluminium intercooler. There’s also twin overhead cams with variable valve timing. 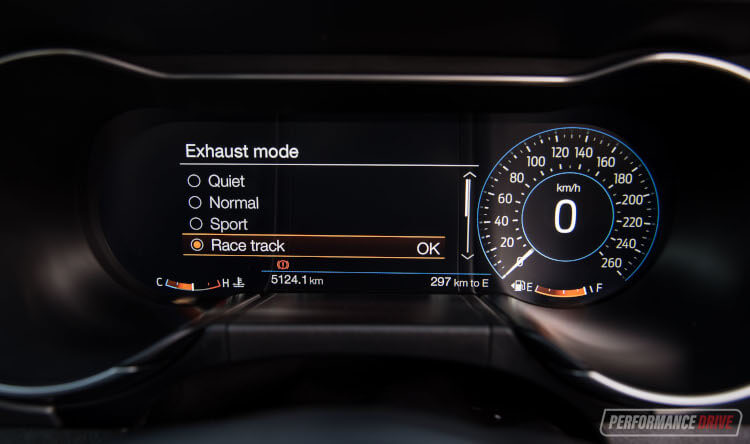 We agree. Even though the mighty unit is capable of belting out 522kW, which is simply madness, in normal conditions and under normal demands, the engine is actually very civilised. And it does sound really refined and almost European. There’s none of that crackling and higher-pitch barking. Instead, it emits a smooth and deep tone that climbs up to a growling thump as you approach the 7400rpm redline. That’s a high redline, too, and not at all in line with traditional muscle car capabilities.

One thing we really love about the R-SPEC is that it truly can be driven as a daily driver. The clutch pedal is friendly and light and the gear shift throw is brawny yet pliable and forgiving. There isn’t much throw required either, so you can quick-shift. Ford has also installed excellent rev-matching functionality into the transmission so it blips the throttle automatically during heated downshifts. It works well, and seems in perfect sync with your speed and tempo. 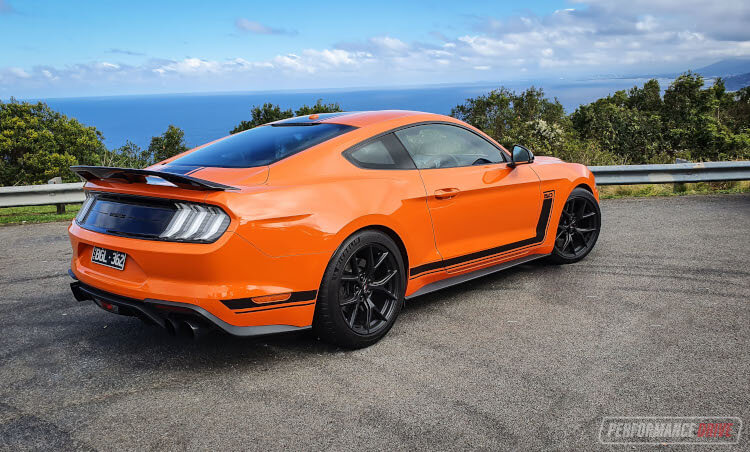 Burbling around town is a real joy. Partly because you have a constant sense, almost lurking in the background of your mind that knows you have so much power which you can unleash whenever you want to. First gear takes you up to around 80km/h, and then second gear goes to around 130km/h. As you can begin to understand, it doesn’t take much of a squirt to keep ahead of flowing traffic.

A vehicle with 522kW and one that weighs 1779kg – which isn’t much by today’s standards – should be capable of 0-100km/h well within the 3.0-second zone. We would typically see an 11-second quarter mile as well. But due to wheelspin and eventually a bit of clutch slippage the best we managed was 4.35 seconds and 12.76 seconds, respectively. 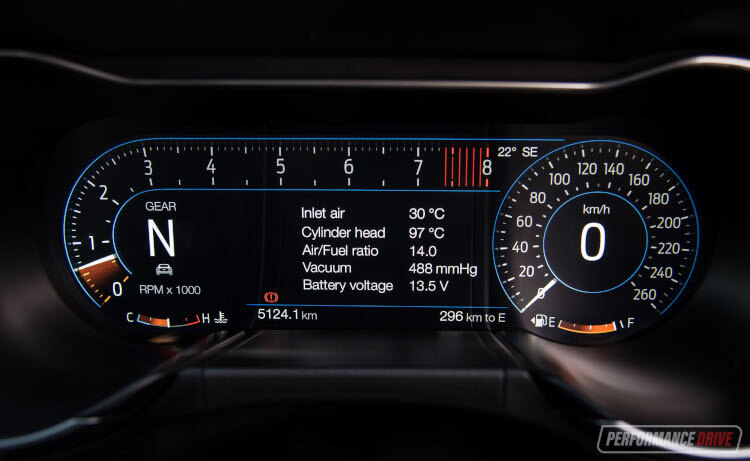 This isn’t slow, but we think it could definitely do better. Especially with a quick-shifting automatic. We’re not saying it should come with an auto. In fact, we applaud Ford for providing a manual. It’s just that if you really rely on acceleration figures, you might be a little disappointed. If you get a chance to take one for a test drive though you’ll see there is much more to the R-SPEC than sprinting starts.

In-gear acceleration is mesmerising. As mentioned, second gear goes to 130km/h, and the engine has more than enough grunt to take off from a stop in second gear. So imagine being able to pretty much plant the throttle pedal from 20km/h. It’ll propel you up to 130km/h in no time. Across 60-110km/h, our Vbox showed a time of just 2.37 seconds. That’s if you’re on grippy tarmac. 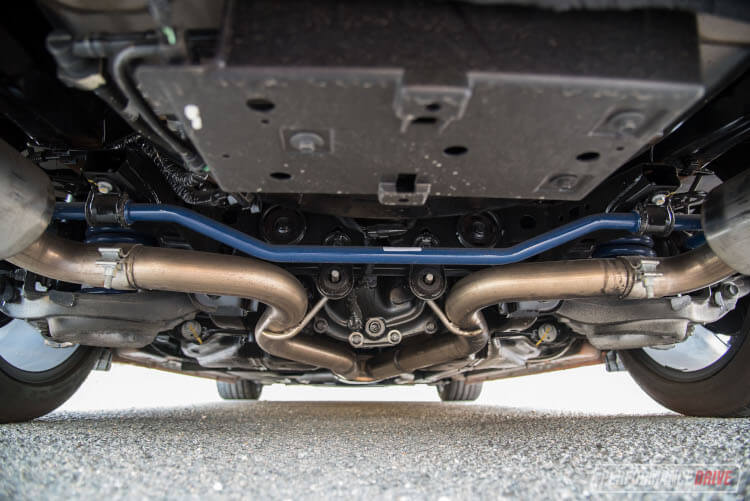 The Mustang isn’t really known for offering superior handling and agility over its main rivals. But Ford has addressed some of this with an enhanced suspension setup for the R-SPEC, fitting MagneRide dampers. It’s firm, there’s no doubt about that. But along a nice, windy road the handling is neutral and intuitive. Body control is very good, so it remains flat and focused at all times. There doesn’t seem to be much understeer, even when pushing hard, and rear end grip is surprisingly reassuring. Some of this is thanks to the Michelin Pilot Sport 4 S tyres, measuring 255/40 on the front and 275/40 on the back.

Look, at the end of the day you don’t buy a muscle car for outright nimbleness and broad-stretching capabilities in dynamic conditions. But on the right road the Mustang R-SPEC is a lot of fun. And perhaps best of all, you don’t need to be a highly-trained professional racing driver to explore the engine’s incredible performance. We’d suggest leaving the traction control on though, at least until you’ve got some money saved for a new set of tyres. 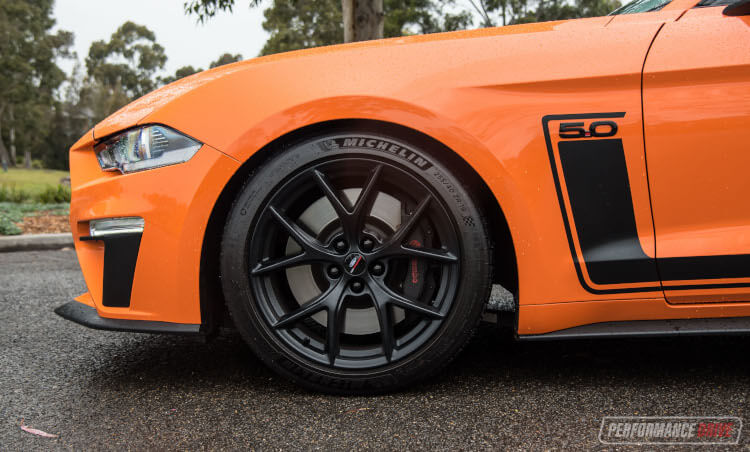 Fortunately, the braking package is super-impressive. It stops on a dime, repeatedly. The front end uses 380mm discs and six-piston Brembo calipers, and 330mm rear discs with single-piston floating calipers. During our usual tests we saw 100-0km/h come up in the low 35-metre zone on multiple occasions, even with back-to-back tests. Out the mountains they seem to resist fade extremely well, and the pedal feel remains consistent. With this much engine power it’s always good to have solid confidence in this department.

Lastly, you might think this beast goes through fuel like crazy. And it does, to some extent. The official average consumption is 14L/100km. That’s not actually that bad considering the energy it can generate. Obviously you can’t get near 14L if you’ve got a heavy right foot. During our week of testing, including flat-out performance tests, we averaged a reasonable (for the performance) 17L/100km.

Cars like this stir all kinds of emotions, from giggly grins to near-terrifying levels of captivation and concentration. We love it. It is a monster, but one that can be tamed. It’s more civilised than you might think (for a 700hp car), and surprisingly versatile in normal conditions thanks to the different driving and exhaust modes. And it looks like nothing else on the market. It’s also proudly Australian. Well, sort of.

If you want one (like we do), we’d recommend getting in touch with some of Ford’s rural dealerships as these are likely to be the only ones left with remaining stock. That’s if all 500 haven’t already gone by the time you read this.