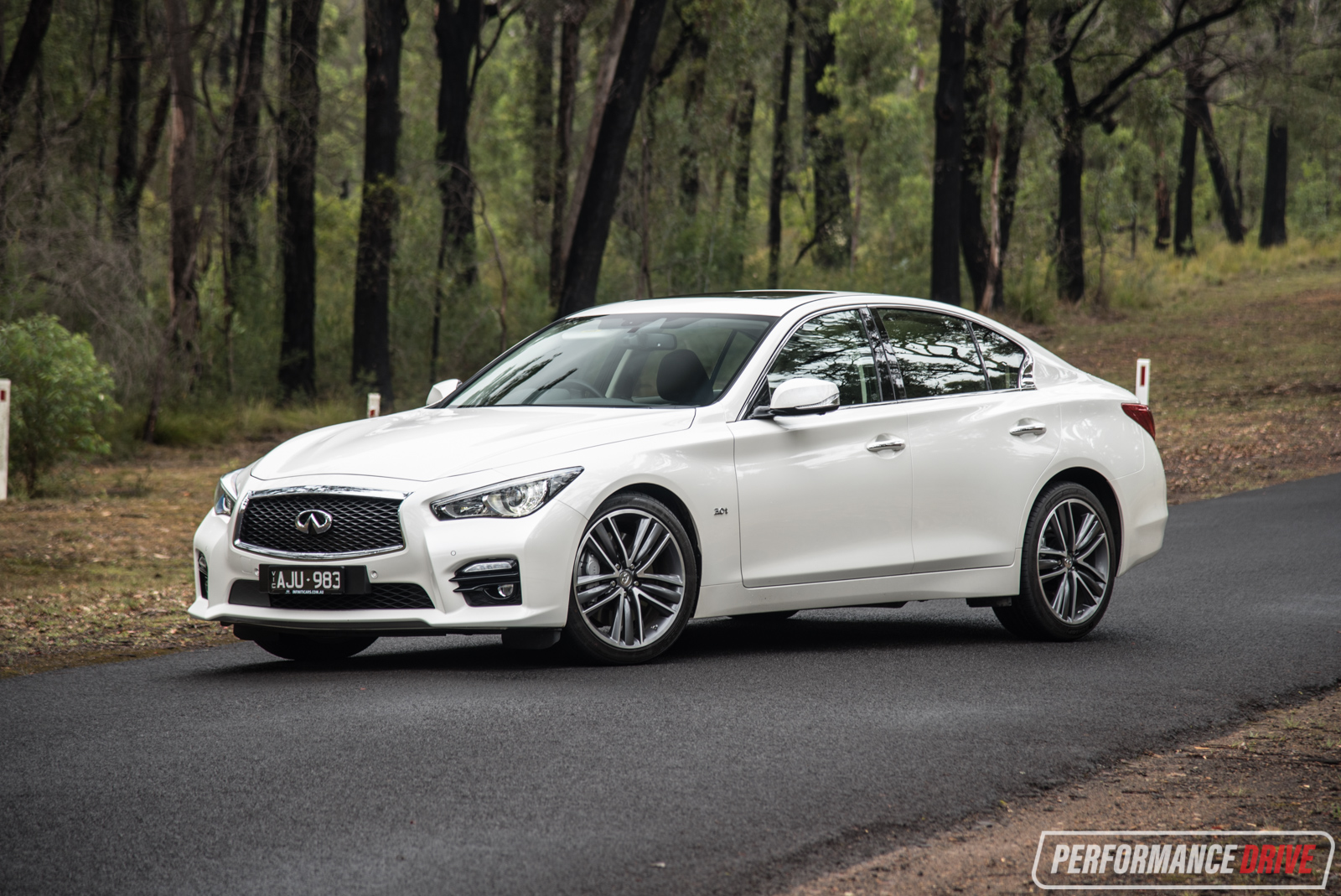 The Infiniti brand has so far struggled to make an imprint as a household name in Australia, particularly in the mid-size luxury sedan market. But there is one surefire way to get everyone’s attention; use a twin-turbo V6 derived from the Nissan GT-R engine. And that’s exactly what Infiniti has done in its latest update for the Q50 sedan. This adds to an already generous lineup that includes Mercedes-Benz-sourced 2.0-litre turbo-petrol and 2.2-litre turbo-diesel engines, and a 3.5-litre hybrid V6. 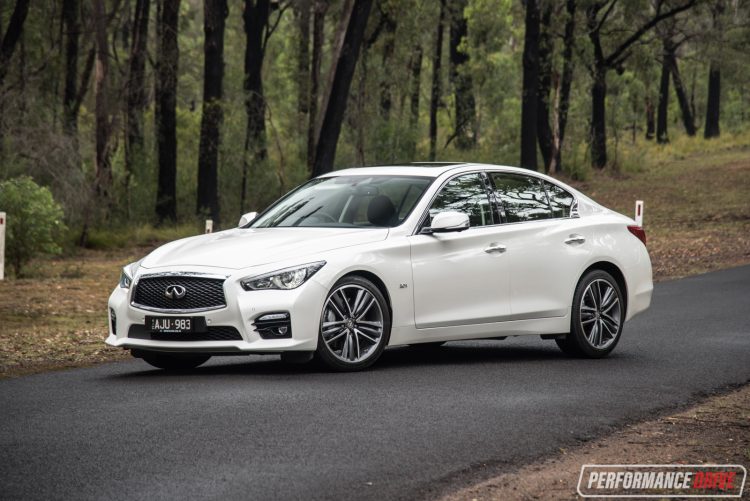 As a brand, Infiniti is the luxury branch of Nissan. The Infiniti Q50 is a premium four-door-only that takes on the likes of the Audi A4, Lexus IS, Jaguar XE, and the two bit-hitters from Germany (3 Series, C-Class), along with the Volvo S60. Entry-level prices start from $51,900.

Specific to the 3.0-litre twin-turbo, there are two tunes on offer; the Sport Premium or Silver Sport, which outputs 224kW and 400Nm, and the Red Sport, which produces a red hot 298kW and 475Nm (highlighted by the colour of the ‘S’ in the badge). Here, we are giving the former a test run. Prices start at $69,900. 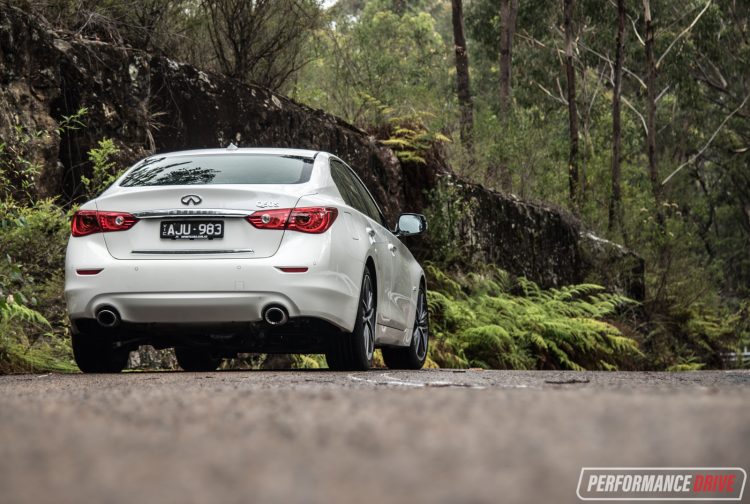 When it comes to pricing for the Silver Sport you will struggle to find another car equipped with the same power outputs in this price range. But if that isn’t enough to win you over, it also comes with an endless list of features and technologies. Standard, it features a 14-speaker Bose sound system with sub-woofer, blind-spot sensors, lane departure warning, emergency collision braking system, front and rear parking sensors and a rear-view camera with 360-degree view, adaptive cruise control, satellite navigation, illuminated door handles, auto high beam, cornering headlights, Bluetooth and internet connectivity via a paired device.

There’s also digital DAB+ radio, tyre pressure sensors and run flat tyres, and auto retracting seat belts. The only thing that isn’t standard is premium paint. Comparing to the competition, one feature it misses out on is automated steering parking assistance.

Exterior styling is very unique to the Japanese brand, with unconventional curves and details that help distinguish it from the common German rivals. The rear is quite Mazda6 or even Hyundai-like, with smooth flowing lines and panel accents. But the front end gives off an angrier appearance. Its presence on the road will turn heads – let’s just hope people don’t get the logo confused with Chery’s logo. 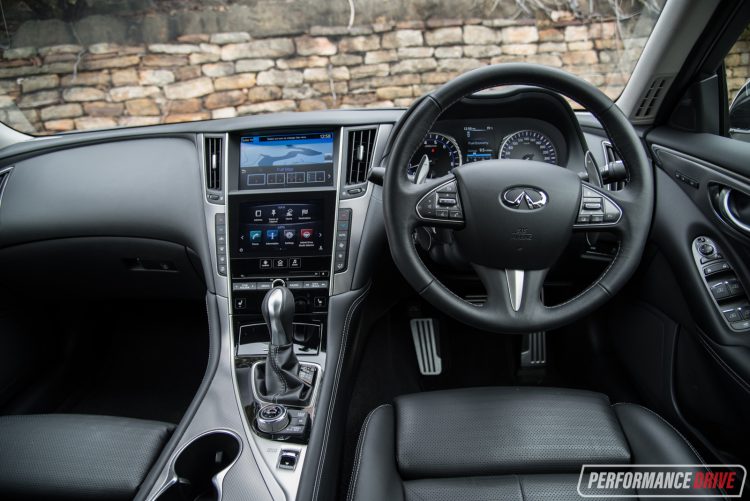 Turning to the interior, you will notice there is plenty of room to spread out and relax. Whether you’re in the front row or rear, everyone is well accommodated. The front seats have more adjustments than other vehicles in this category, including the ability to adjust side bolstering and the length of thigh support. The seat belts even retract electronically for you – obviously it’s a car with a large focus on the American (lazy?) market.

The infotainment system is navigated via two separate 7.0- and 8.0-inch touch-screens. One is mainly for displaying the satellite navigation, and the other to control sound, apps, and climate functions. The two screens look a bit of a mismatch in our opinion, given they have different resolutions and different tones and graphics. Unfortunately, to alternate between the climate and sound menus you need to click an extra button to toggle between them, as both menus do not fit on the screen at once. Aside from that, the Intel-powered system works without annoying glitches or delays. 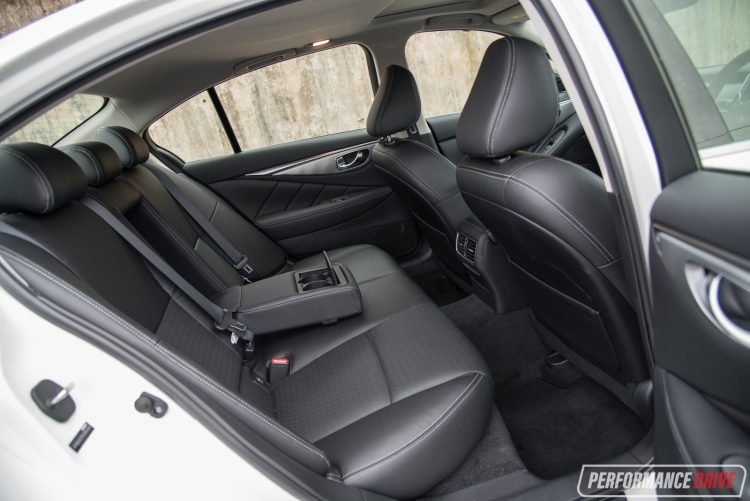 Infiniti has adopted a brute Bose 14-speaker and sub-woofer sound system as mentioned, which produces bass at volumes you expect only from aftermarket systems. The sound is a big bass fest. However, there is a noticeable reduction in bass as you turn the volume up – likely an anti-damaging design. Oddly, an artificial engine sound is played through the sound system as well, when you drive the car hard in the sport mode. This can make you question the authenticity of the twin-turbo engine, even though all of the ingredients are there for a great aural experience to start with.

Even with the interior being quite roomy and accommodating, we were expecting a trade-off. But to our surprise the boot is also spacious. Thanks to the run-flat tyres, boot capacity measures 500 litres. This is 20 litres more than you get in the Lexus IS, which is arguably its closest competitor.

Spoilt for choice with the engine offerings, the new 3.0-litre twin-turbo V6, part of the VR family like the GT-R’s engine, will prove to be a favourite, even in this lower tune option. Although it’s abilities are not shown in the way of visual exterior flair compared with the other variants, don’t let that fool you. That 224kW makes this a lively drive. The stability control won’t inhibit wheel spin completely, allowing you to get your point across. Loads of low down torque – peak 400Nm arriving at just 1600rpm – means cross country ability is outstanding.

It goes without saying the twin-turbo engine is what we love most about the Q50 Silver Sport, and it seems the industry feels the same; it was recently in ‘Ward’s 10 best engines’ list. Even with maximum torque starting low, the engine is free-spinning and happy to rev right out. Peak power is at 6400rpm, making this car a lot of fun just purely from a powertrain standpoint.

The engine is matched to a seven-speed automatic transmission, which seems to provide the right engine spin for all circumstances, and the long final drive ratio of 2.9:1 has the engine spinning at roughly 2000rpm at 120km/h for economy. Strangely, the 298kW Red Sport has a shorter final ratio of 3.1:1, providing a focus on acceleration.

We timed the 0-100km/h sprint in an impressive 6.18 seconds. Although more expensive ($90 more), the Volvo S60 T6 has slightly more power and torque from a 2.0L, four-cylinder engine (228kW and 430Nm), and offers a claimed 0-100km/h of 5.6 seconds. Compared with the naturally aspirated, 233kW Lexus IS 350’s claimed 5.9 seconds, the Silver Sport isn’t weighing up so good. It feels very quick though, and that’s probably more important. The immediate response and the long-legged surge of the twin-turbo system is addictive and exciting, and definitely a more memorably experience than the aforementioned rivals. 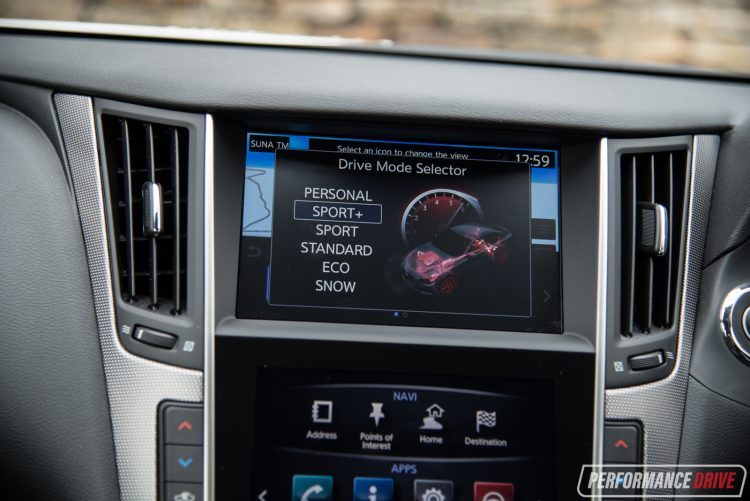 There are many driving modes to select from, including ‘Standard’, ‘Eco’, ‘Snow’, ‘Sport’, ‘Sport+’, and ‘Personal’. The latter gives you the ability to customise to suit your own taste. In the sport modes, the suspension tightens vastly from a very cushioned ride to a rather taught and almost jumpy ride. These modes are only commendable and beneficial on smooth surfaces. There are also magnesium paddle shifters to give you more control.

Standard on the 3.0t models is Infiniti’s adaptive ‘Dynamic Digital Suspension’. In other words, the adjustable shock absorbers are able to shift from a comfort-focussed ride to a more sporty and rigid ride, while examining body roll, pitch, and bounce rate to pin down unwanted body movement. They work with an independent double-wishbone front end and an independent multi-link rear. This all makes the Q50 very flat and quite neutral in the bends, however, the lack of a limited-slip differential will frustrate the more adventurous of drivers.

Infiniti has worked hard to improve its innovative ‘Direct Adaptive Steering’ with a version two (DAS 2), after much critical backlash since its inception. Standard across the board, this adaptation has made only slight improvements to what is an artificial steering feel. Because the steering is computer-controlled with no physical shafts, there is an obvious digital disconnect between what you put into the steering wheel and what the car does, and vice versa. This can become a big issue if you want to drive the car hard. If you go over a bump, there is no movement in the wheel, so you don’t know what sort of corrective input you need to make. Also, the steering angle seems to vary with speed. This means that if you turn the wheel and hold it in one position, and change your speed, that steering angle will change. We hate it. 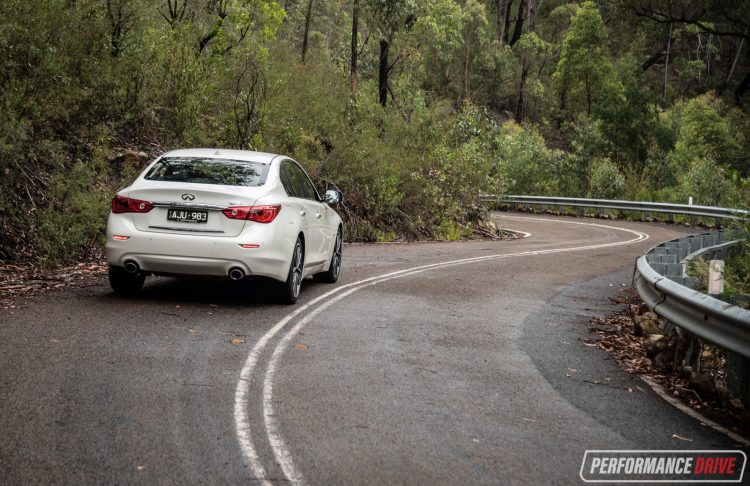 Using the on-board driving assistants seems to further disconnect the driver and the road. The Q50’s version of active city braking goes one step further and automatically brakes the car while driving regularly; not just in emergency last second situations. It is similar to when cars brake using radar cruise control, except here, you don’t have cruise control activated. So when driving through the busy city you can find yourself fighting with the intrusive and unrefined automatic braking function. Luckily, all this can be turned off if you’re not in the mood.

As can be expected, and almost forgiven for such a high output engine (more so in the Red Sport), fuel consumption is not where the Q50 Silver Sport excels. The V6 consumed about 10.8L/100km in our pretty harsh testing. But even the official average figure isn’t all that great when compared in this segment, at 9.2L/100km. Obviously, frequently opening up the throttle will make these figures soar, and soar much higher than some rivals that offer similar output. 95 RON rated premium petrol is recommended, and with a huge 80-litre fuel tank you can expect to refuel after roughly 750km.

Servicing is required the usual 12 months or 15,000km, whichever comes first. And Infiniti backs you with four years warranty instead of the usual three years. Make sure you bargain in a free or capped-price servicing deal, as there are a few getting around. 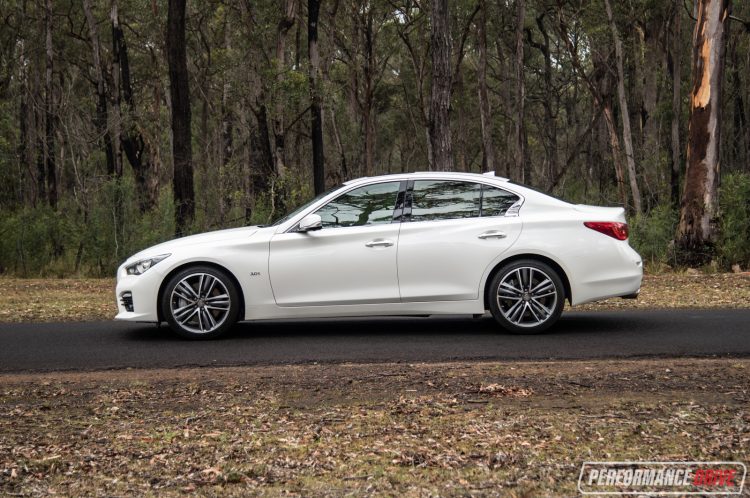 In order to help with underwhelming sales numbers, the Japanese brand has done the right thing and released the Q50 with an exciting twin-turbo V6. The engine re-invigorates the luxury/sports sedan, no doubt about it, and makes it a contender that should not be overlooked. There are loads of technologies all thrown in as standard too; not as costly options that usually cause the final sale price to spiral.

For some, the new  Direct Adaptive Steering will be a feature that cannot be overlooked. For a sports-luxury sedan in this kind of market, buyers tend to crave an interactive and sporty experience. They have no time for a fake, ‘digitally remastered’ sensation – leave it up to a Toyota Prius to be tried and refined first.

If you can look past the steering, the spacious and luxury interior might help to win you over. That V6 is also a brilliantly smooth and versatile unit. If you still need more, it’s only an extra ten grand for the drooling 298kW Red Sport. This is the highest output you can buy for its price.