Mercedes-Benz has sneakily revealed the 2013 Mercedes-Benz G-Class facelift in the background of a new GLK-Class image. The facelift brings mild styling tweaks inside and out. 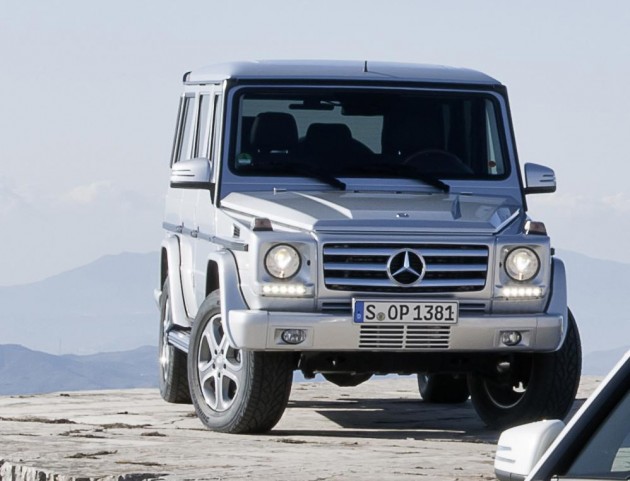 The Mercedes-Benz G-Class is regarded as one of the coolest vehicles on the market. In Australia we get the G 350 BlueTEC, which comes with a 3.0-litre turbo-diesel offering 150kW and 540Nm, as well as the G 55 AMG, which comes with a 5.4-litre supercharged V8 producing 373kW and 700Nm.

Specifications and details on the 2013 facelift are scarce at this stage, however, we can see that visually it gets new daytime running LEDs under the headlights, revised front guard vents, and some restyled side mirrors.

Under the bonnet, the update is expected to come with the new 4.7-litre twin-turbo petrol V8 offering 320kW and 699Nm, but official confirmation is yet to be made. For the new AMG version, it’s said to feature a 6.0-litre twin-turbo V12 engine, producing a whopping 450kW and 1000Nm.

Other changes with the update include a freshened up interior, with a new steering wheel, a tweaked centre dash fascia layout and LCD command centre, and a new instrument cluster behind the steering wheel.

Mercedes-Benz will likely unveil the 2013 Mercedes-Benz G-Class before mid-2012. We’ll keep you updated with more details and images as they come.