Chevrolet has unveiled the 2013 Chevrolet Sonic RS turbo ahead of its official unveiling set for the 2012 North American International Auto Show in Detroit in just a few weeks. 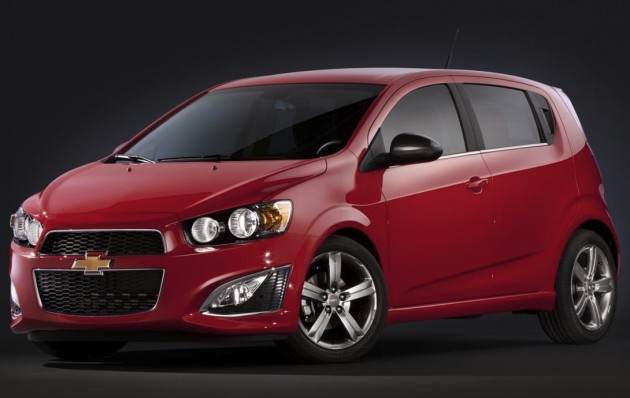 Bringing a bit of zing to the compact hatch, the 2013 Chevrolet Sonic RS turbo features a 1.4-litre Ecotec turbocharged four-cylinder engine producing 103kW of power and 200Nm of torque. It’s matched to a new six-speed manual transmission (with revised ratios over the normal Sonic), or a six-speed automatic.

It also features various sporty highlights such as a bodykit with new front and rear bumper bars, a rear spoiler, performance lowered suspension, new foglight designs, and a sports exhaust with chrome outlets.

“From every angle and every touch point, it is a car that is unabashed in its performance statement – and one that drives Chevrolet’s performance legacy into its second century.”

Even though the Chevrolet Sonic is an American car, it was actually partly developed right here in Australia. It’s available here as the Holden Barina (a step up from the Barina Spark).

In the US, the 2013 Chevrolet Sonic RS turbo is set to go on sale towards the end of 2012. We’ll keep you updated in regards to a possible Australian market launch.