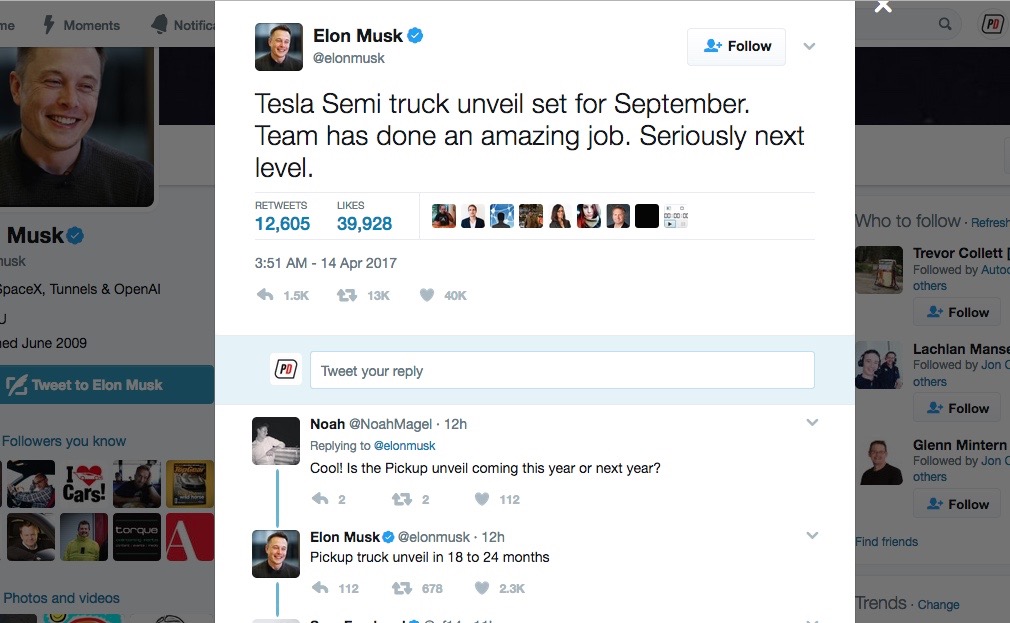 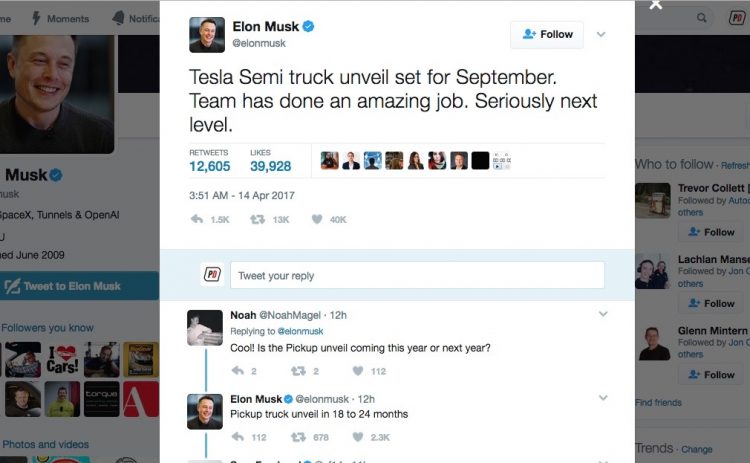 Considering Musk is typically quite conservative in his tweets, it seems reasonable to assume Tesla has quite an impressive set of cards tucked up its sleeve.

Looking back to Tesla’s ‘Master Plan Part Deux’, which was announced in a blog post in July last year, Tesla specifically mentioned that large-scale cargo trucks were firmly in its sights: “In addition to consumer vehicles, there are two other types of electric vehicles needed: heavy-duty trucks and high passenger-density urban transport.”

At the time, Tesla said both products were “in the early stages of development at Tesla, and should be ready for unveiling next year.”

We can also report a rough timeline for when a Tesla pickup truck (ute) will be available, with Elon Musk replying to a tweet saying it will be available “in 18 to 24 months.” Further down in the tweet Musk also points out the next Roadster will be a convertible.

While it remains speculation at this point, considering recent testing here in Australia of autonomous large-scale cargo trucks, it seems likely that Tesla’s first foray into the realm of electric trucks could be packaged with some variation of the Autopilot system.

There is however a strong hint from Tesla’s Master Plan that makes it reasonable to assume these trucks will be packaged with an autonomous driving platform. At the time, Tesla said its first semi truck will “deliver a substantial reduction in the cost of cargo transport, while increasing safety and making it really fun to operate.”

Tesla’s first jump into the world of zero-emissions cargo transport will be met with some stiff competition in the form of Salt Lake City’s Nikola One, a hydrogen fuel-cell powered truck, as well as product developments from Mercedes-Benz last year.

Construction of the truck will more than likely take pace at Tesla’s partially-completed Gigafactory, considering its current 5.3 million square-foot Freemont facility is running on what must be close to capacity with the construction of the Model S, Model X and Model 3.

The stock market responded extremely positive to the news from Tesla, closing at $304 a share, up $7.16, a 2.4 per cent increase overnight; giving it a market value of $49.6 billion.