BMW M has been spotted testing the new 2013 BMW M3 F80 sedan on the Nurburgring. This is the first time we’ve been able to see a prototype being driven under full acceleration, following a recent spotting of the car on the road. 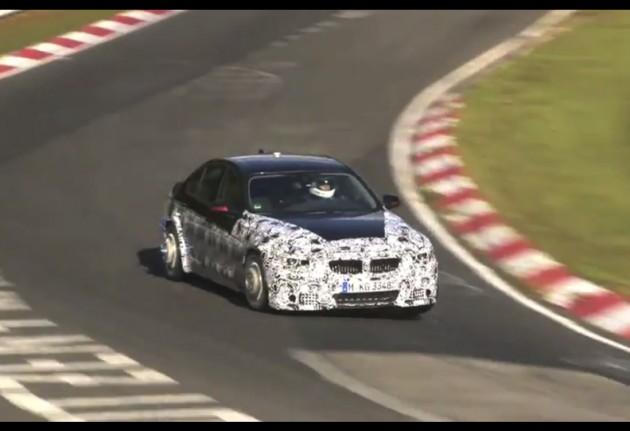 More importantly, we get a snippet of what the 2013 BMW M3 F80 sedan sounds like. Even though this is a prototype and the production car will likely be fitted with a revised exhaust system, the key element we hear is that it is not a V8 like the current model.

The next judgment to be made from the video is whether the engine is a V6 or a straight six. Also, whether it is a turbocharged engine. Judging by the sounds, it’s very difficult to tell. According to a recent BIMMERPOST article, BMW M CEO Dr Nitschke said that BMW M would not do a V6 layout.

Whether he said this as a simple deterrent or not is still questionable. Some other options include a triple turbo layout (incorporating a potential third electric turbo – patent found), possibly developed onto the 3.0-litre straight-six engine also seen in the BMW 1 Series M Coupe. What it ends up being, power is expected to be in the 340kW range (450hp).

In the video, you do notice there’s a distinct crack and pop sound in between gearshifts, which means the new 2013 BMW M3 F80 will come with a sophisticated semi-automatic dual-clutch transmission. The pops could also be resonated sounds of a wastegate as the power is cut momentarily during the gearshift?

Another detail revealed in this latest prototype testing video is the semi-revealed bodywork. The new BMW M3, like most previous BMW M3 vehicles, will feature pumped wheel arches front and back accommodating a large tyre and wheel package.

The 2013 BMW M3 F80 is likely to debut in sedan form first, with a concept said to be on its way to the 2012 Geneva Motor Show in March. A coupe will then follow, possibly adopting a BMW M4 nameplate.

Click play below to have a listen. What do you think the engine is?