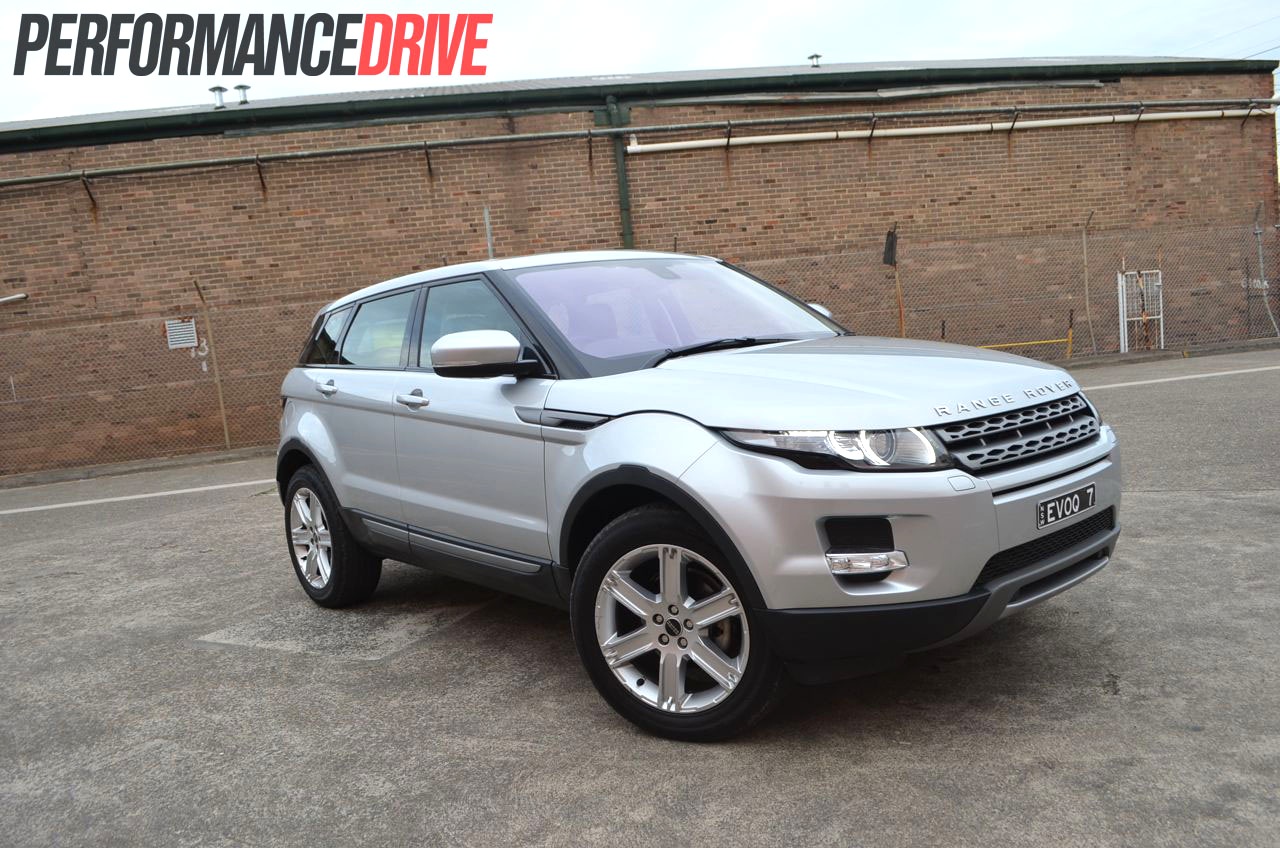 The Range Rover Evoque Pure SD4 is all about style and class, packaged into a medium-sized SUV that’s fun and capable to drive. It’s also the most-affordable model in the Range Rover stable. 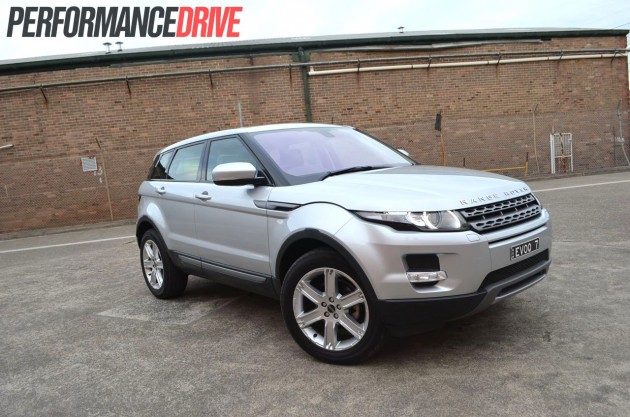 The Evoque shines bright amongst the premium SUV offerings. It’s not only a pretty face though, it’s also packing lots of technology, particularly in the field of off-road readiness thanks to parent company Land Rover. And if there’s something that you aren’t quite fond of, chances are, there’s an option that’ll suit your desires; there are 36 different Evoque variants to chose from. 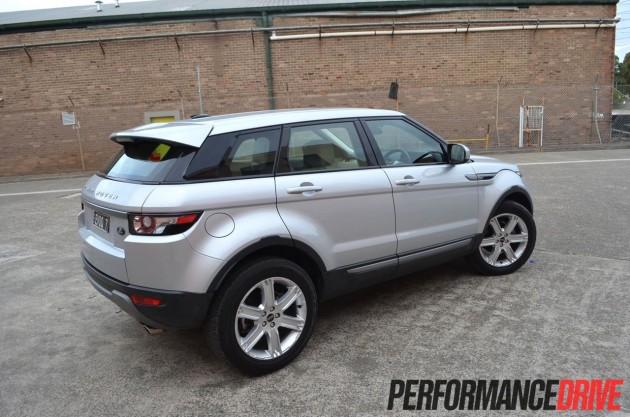 The Pure (as tested) is the entry level of the high-output diesel ‘SD4’ range. There’s also the eD4, TD4, and the turbo-petrol Si4. All Range Rover Evoques are matched up to an advanced Haldex AWD system.

The five-door Pure SD4 is priced from $57,395, and comes equipped with a six-speed manual transmission as standard, with a six-speed automatic adding $2480 to the price tag. You can go for a three-door version too, however, you’ll need to pay an extra $1500. 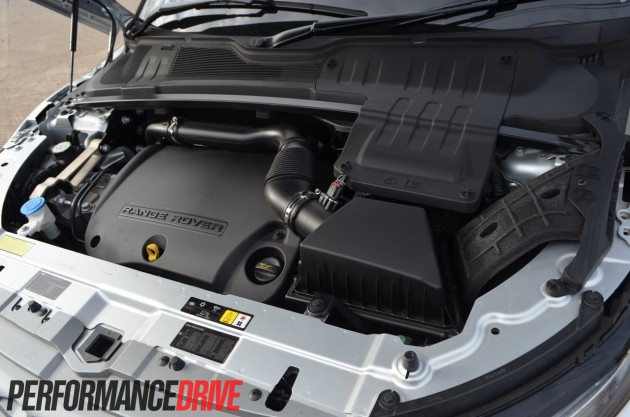 If you’re picky when selecting a colour, the Evoque is available in 12 different hues. White is the only ‘free’ colour on the chart, with the rest adding between $1300 to $2600 to the overall price. You can also choose to have the roof painted in a different colour to the body. 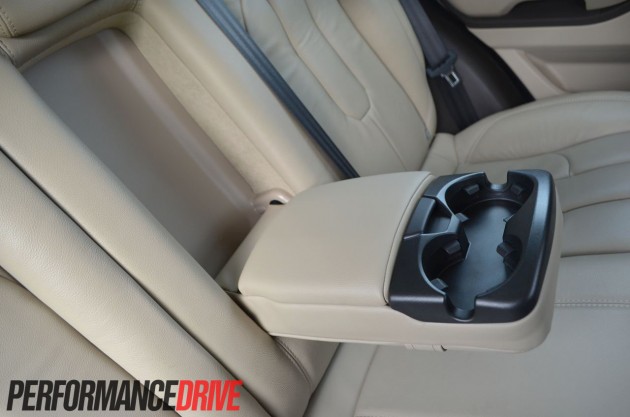 On the inside it’s all class, with soft comfortable leather seats, excellent ergonomics, and suave design cues. The Oxford leather wrapped steering wheel, brushed aluminium trimmings, and leather wrapped dash maintain the level of sophistication that you’d expect to find in a Range Rover. 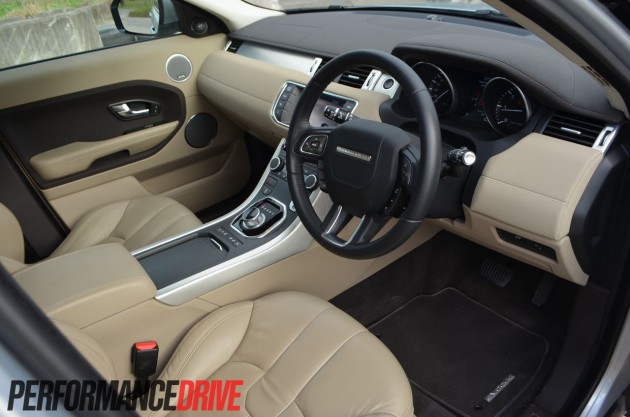 There isn’t many interiors this side of $100k that would impress as much. They’ve even got the smell right; it’s reminiscent of that smell you get when you walk into an expensive clothes shop (yeah, that smell). From the flush fitting door speakers, to the dash stitching, to the click and feel of the buttons and dials, everything oozes close to perfection.

Finding a home in the centre of the dash is an eight-inch colour TFT screen, which is used to display everything from audio, to navigation needs. The centre of the instrument cluster also houses a five-inch colour TFT screen (located between the dials), keeping the driver informed of the external temperature, remaining fuel, distance travelled, current gear, and drive mode.

A nice little touch to the centre console is the Jaguar-esque rotary gear selection dial which rises as soon you press the start the button. 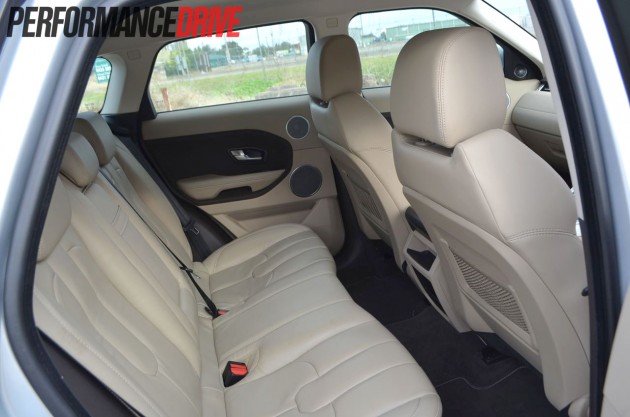 One thing that’s worth mentioning is how well padded the seats are; not too soft, and not too firm. The second you jump into the driver’s seat you get an instant feeling of ‘ahh’. The steering wheel falls right into you lap, and all the dials and controls are easily at arm’s length. Head and leg room is more than adequate up front, and in the back.

The Evoque has no problem carrying five passengers comfortably. Rear boot space is made handy with the inclusion of 60/40 split fold rear seats, offering up 1445-litres of space in total when the seats are laid flat. 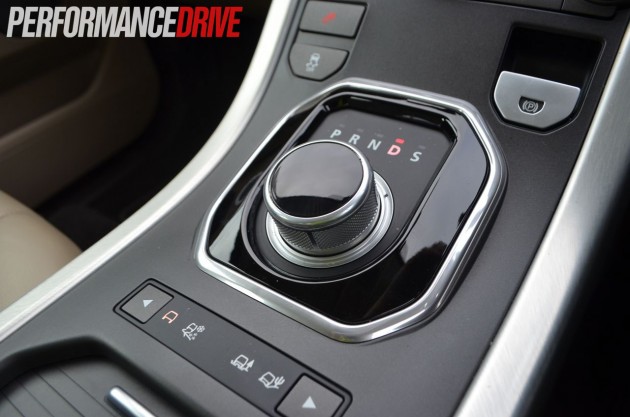 Some say music is the most important part of any journey, if that’s true, the (optional – included in Pure Tech Pack as stated above) Meridian 11-speaker stereo does an excellent job of providing a sound that has good clarity and acoustics.

Since the Evoque’s launch, it has gone on to win various design awards, one of them being the Design Car Of The Year 2012. In the first nine months the Evoque was on sale, Range Rover sold an astounding 80,000 examples worldwide. The Evoque remains one of the closest concept-to-creations around – the concept being the Range Rover LRX. And it appears the Evoque has been an entree-sized taste of the British car maker’s future design cues, with the recent release of the Range Rover Sport looking not all too dissimilar. 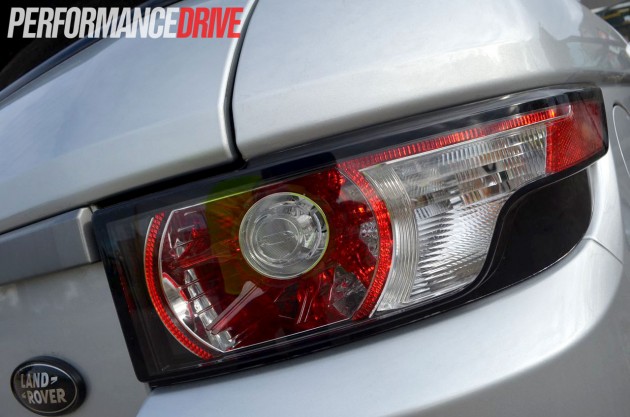 The high window line gives the Evoque a bold presence, almost making the SUV appear larger than it actually is. The front and rear bumpers seamlessly flow into rest of the car, as does the bonnet and front headlights. We’re of the opinion the Evoque has to be the benchmark as far as looks go in the medium-size luxury SUV segment. 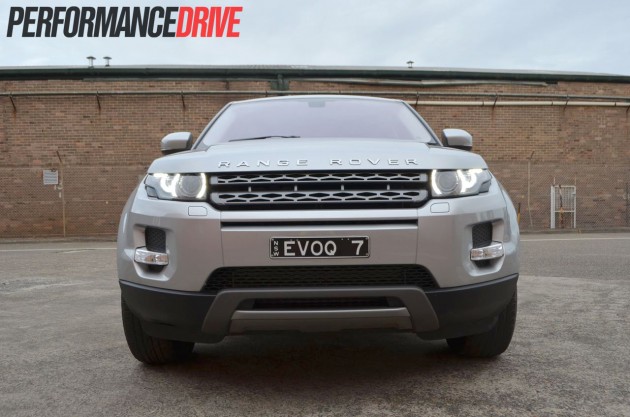 The lower part of the Evoque Pure is left unpainted (smooth grey plastic) to help prevent the Evoque from aging prematurely should any unwanted sticks or scrub rub the lower sides in the event you tackle some bush tracks.

The Evoque has a commanding presence on the road, and it’s just as commanding to drive; it’s one of those cars you hate to leave sitting in the driveway. It’s almost like steering a sporty hatchback. It tips into corners and hugs the road much better than you’d expect. It feels quite ‘chuckable’, with very little body roll. Steering feedback through the wheel is very communicative, as is the meaty feel of the brake pedal. 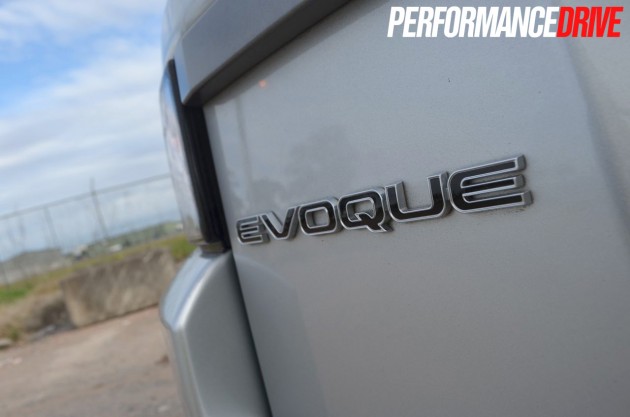 The chassis is responsive and remains in check should you suddenly need to jump on the brakes or swap direction mid corner.

The suspension, in true Land Rover fashion, handles just about anything you can throw at it. There’s no steering jolts if you hit a pot hole, or weird bobbles or jiggles. 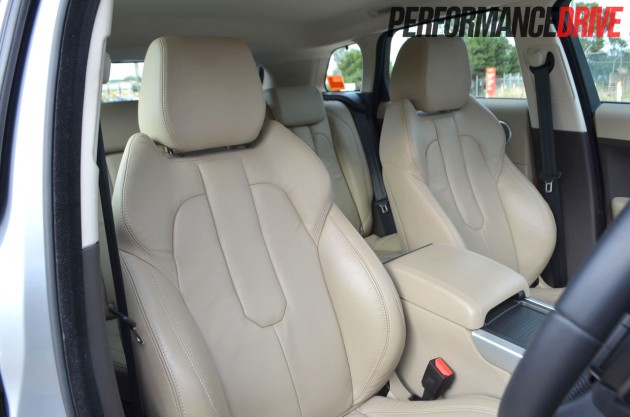 The suspension tune is firm enough to give the Evoque a somewhat sporty edge, but also provides passengers with a supple and comforting ride.

The 140kW turbo diesel engine matches up with the six-speed auto extremely well, wasting little time in delivering acceleration no matter the situation. One of the Evoque SD4’s greatest assets out on the road is the availability of 420Nm from just 1750rpm; very handy should you need to make a dash through the traffic, pull up a hill, or overtake out on the freeway. 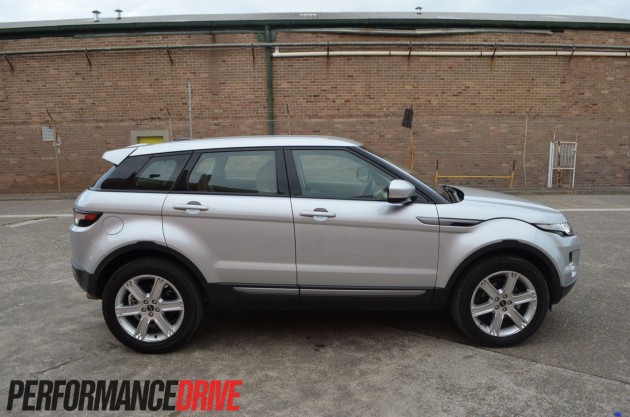 We averaged 8.6L/100km during our time with the Pure SD4. While our figure is 1.9L/100km above the official average, it’s certainly not a devastating figure for a car that has lots of room, and handy performance.

The Evoque looks like it would be scared to get its fingernails dirty, but that’s not the case. The Haldex all-wheel drive system and drivetrain smarts give the Evoque a clever edge as far as tackling the bush is concerned. 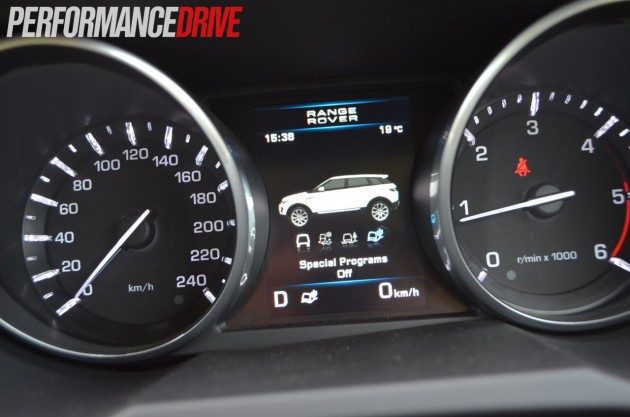 The Range Rover Evoque comes with a handy system called ‘Terrain Response’, allowing the driver to select either mud, sand, or snow mode. Once a selection is made, drive is adjusted according to wheel slippage, speed, and direction, giving the Evoque the best possible chance at overcoming the conditions.

Our test involved a variation of ups and downs and mud ruts. The Evoque dug its paws into the ground and carved through the terrain with ease, maintaining plenty of go-forward ability. The front and rear overhang of the Evoque is quite short, allowing for steep approach angles to be tackled. While it’s no Land Rover Defender, it’s certainly not shy of a rugged hill, or two. 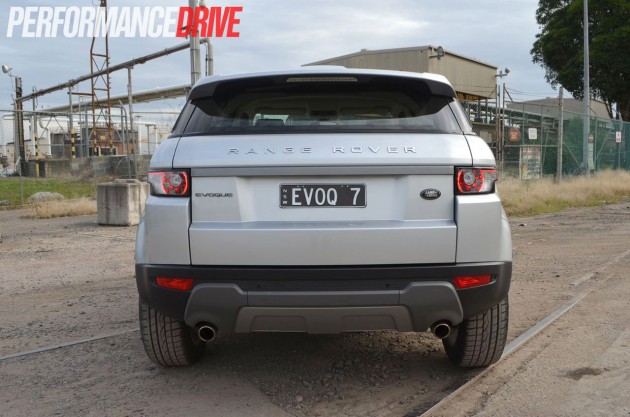 The Range Rover Evoque spells quality at all corners. It’s sharp to drive, has an impressive interior, and a very handsome exterior. If you’re looking for a medium-sized luxury SUV, the Evoque could be it. 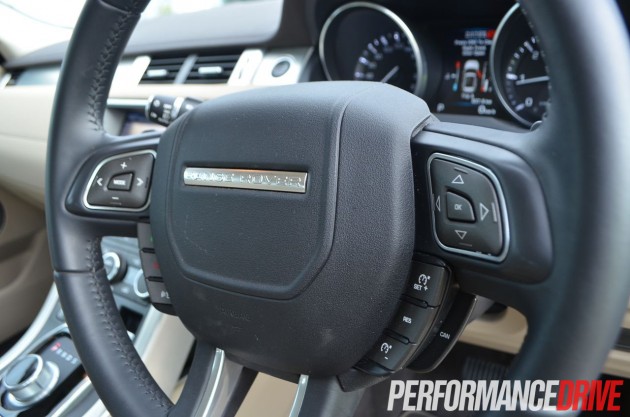 Inside you can easily fit up to five passengers along with a decent amount of luggage. You could argue some points of the Evoque are a little over done, mainly style wise, but we have to remember this is a Range Rover, it’s meant to look classy/flashy, yet remain more than capable at getting its wheels dirty.