Skoda has previewed its epic Fabia Combi R5 concept, ahead of its display at the GTI meeting in Worthersee this month.

The concept is powered by an 1.6-litre turbocharged engine, producing an unspecified power figure, which is mated to an all-wheel-drive system through a five-speed sequential gearbox.

The design concept is essentially a watered-down version of Skoda’s Fabia R5 which claimed victory in its debut event, at the Sumava Klatovy Rally. Skoda explains,

“The new Skoda Fabia R5 caused a sensation at its first ever race. The Skoda team brought home a clear victory from the new model’s world premiere in the Sumava Klatovy Rally. The high-tech racer – the Skoda Fabia R5 Combi – will be presented as an estate show car at Worthersee.”

Judging by these design sketches, the concept will take on a street racer theme with plenty of colour and decals. On the roof you might notice the rally-like air scoop, while at the back is a neat wing extending off the tailgate.

This will mark Skoda’s 6th appearance at the iconic GTI event in Worthersee, where Skoda will present the new design concept to more than 200,000 petrol heads. Skoda will also be displaying the R5 rally car. 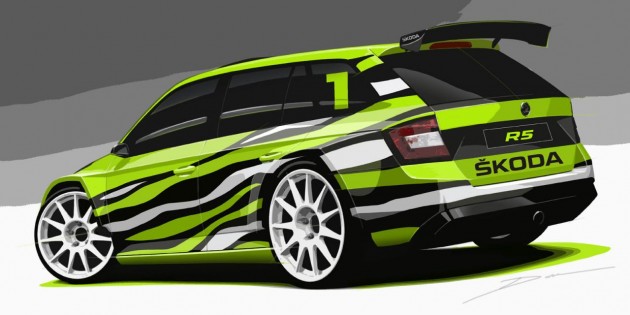