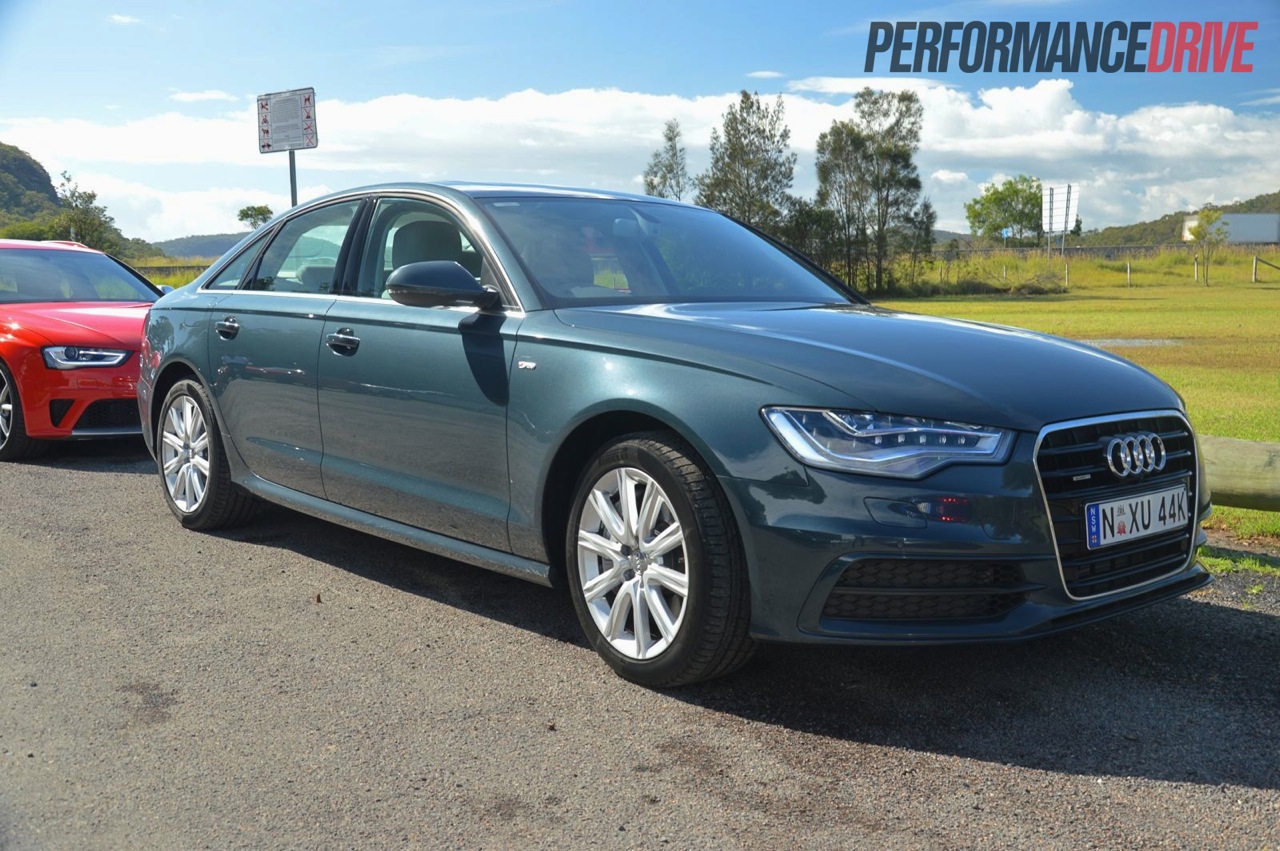 Allow us to introduce you to the quickest diesel vehicle currently on sale in Australia, and, as far as we’re aware, the quickest production diesel sedan ever made; the 2013 Audi A6 TDI Biturbo. It might look innocent on the outside, but be warned, under full throttle this ‘oil-burner’ turns very quickly into a scorching sports sedan. 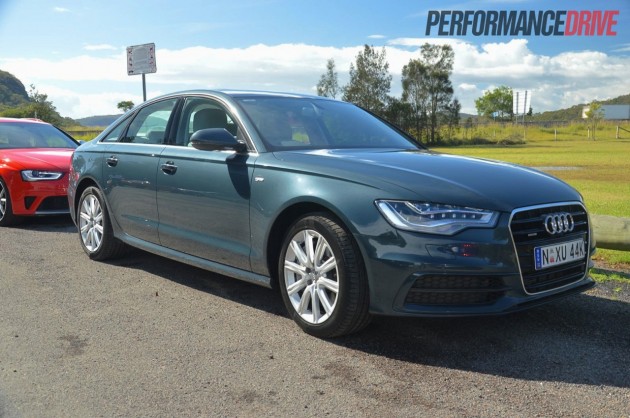 PerformanceDrive was recently invited to sample some of Audi’s latest performance cars, which gave us an opportunity to go for a proper test drive in vehicles such as the TT RS Plus, S7, RS 4, the R8 V8, and the A6 TDI Biturbo. Stay tuned for ‘quick spin’ reviews of the other models. 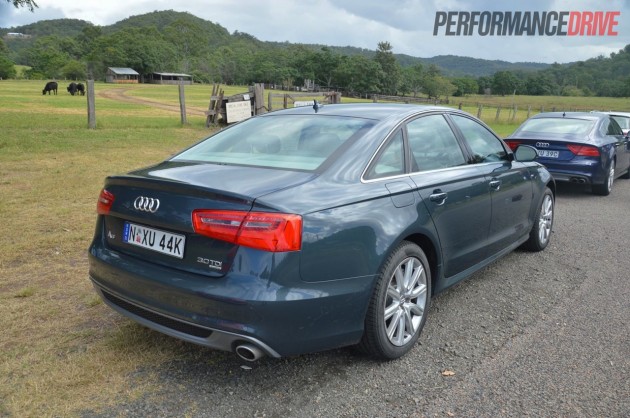 The A6 TDI Biturbo is the new flagship A6. (The engine is also available in the A7.) It sits on top of the previous 3.0 TDI, which used a single-turbo V6 producing 180kW and 500Nm.

Being the flagship, the Biturbo comes with lots of standard luxuries. There’s Audi’s new MMI interface with sat-nav and a retractable eight-inch screen, a 600-Watt Bose surround sound system with 14 speakers, leather upholstery with electrically adjustable front seats, real walnut inlays on the dash, and Audi’s new Drive Select system which gives the A6 a more versatile handling and driving character.

On the outside, the Biturbo is relatively sedate. A set of 10-spoke 18-inch alloy wheels is pretty much the only element that distinguishes it from the rest of the range. This particular test vehicle is fitted with the S line package though ($6950), which adds sports seats, brushed aluminum trimmings, a sports steering wheel with paddle shifters, sports suspension, and a set of 20-inch alloy wheels (not fitted here).

Under the bonnet is where it’s all happening. There sits a 3.0-litre twin-turbo diesel V6, which Audi says is pretty much all new, producing 230kW of power and a stomach-lifting 650Nm of torque.

The turbochargers are in series, as opposed to a sequential setup, with a small variable geometry unit concentrating on low-end boost and a larger unit providing puff higher up in the rev range. The change over is initiated at around 2500rpm. Even so, peak torque is available from as low as 1450rpm up to 2800rpm.

As you can hear in the 0-100km/h video below, the Biturbo engine sounds brilliant, especially for a diesel. It sounds like a V8 at some points of the rev range. This is partly due to a sound actuator which resonates sounds through the exhaust system – essentially a mini speaker – adding pleasurable notes. 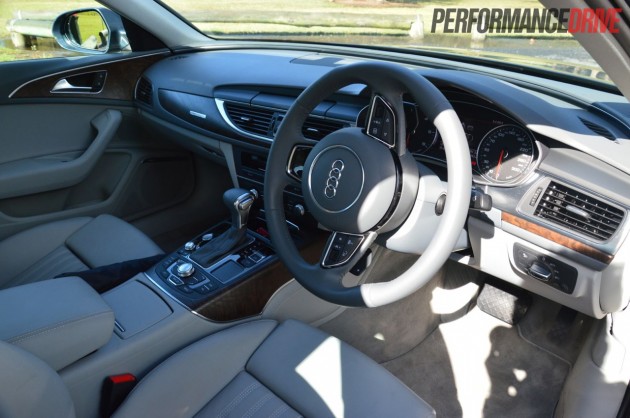 The engine is not only the heart of this car, it’s also the most appealing key characteristic we think. It really does sound like a V8. Yes, we were a bit skeptical about the ‘sound actuator’ in the exhaust, but the end result is nothing but grin-inducing. The amplification sounds genuine; it sounds like it actually has a V8 under the bonnet.

Floor the throttle away from a stop and there’s an almost ridiculous amount of surge that is sent through your body as the A6 is shifted swiftly down the road. Sure, 230kW doesn’t seem like much in the sports car world, but the figure plays only a small part to the attraction. The way full power is served is like a waiter bringing you your favourite slice of cheese cake, and high-fiving it into your face. It hits hard, leaving you in open-mouthed shock – and disbelief in some respects.

Linked up to Audi’s quattro all-wheel drive system, there is zero chance of any of that torque being spun away through the tyres. You can tip it into a corner and at any point nail the throttle, and the sophisticated torque distribution computer will ensure all 650 of those Newton-metres are transformed into g-forces. 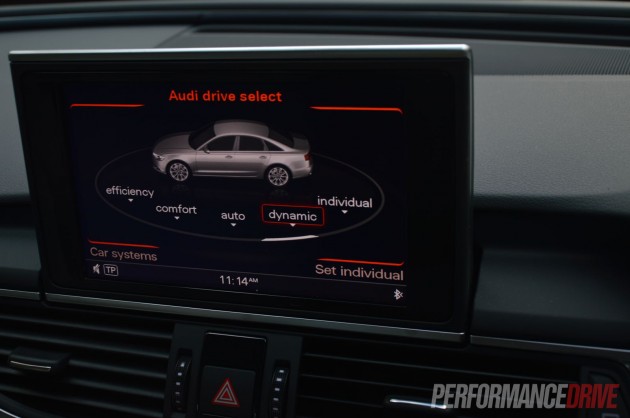 With five different driver settings – efficiency, comfort, auto, dynamic, individual – the ‘dynamic’ mode is the most enjoyable for active driving stints. It puts the suspension, steering feel and throttle sensitivity into the most enthusiastic setting. There is some very minor body roll, and a minor hesitation from the throttle, but apart from that, it’s a very energetic dancer in and between the corners.

Surprisingly, the typical nose-heavy Audi trait is very faint. It actually feels quite alive, and it can be driven like a sports car with good results. The paddle shifters blip the throttle on downshifts too, and paired with the V8-like soundtrack, the experience is convincingly similar to a proper V8 sports car.

The steering is precise and there is a fair amount of feedback, if a little distant and not quite as engaging as what’s offered in the rivals. The slight body roll contributes in a positive way though as you can easily interpret and understand how the chassis is responding to your (steering) demands.

As a comfortable cruiser for highway or city use, the A6 is an exquisite automobile. It’s classy enough to be noticed as a high-end prestige car, but it’s also very welcoming and not at all intimidating. It can be soft and velvet if you want it to be, or a fiery snarl-machine if your mood changes. Although the cliche gets thrown around a lot, it is a Swiss army knife of the luxury market. 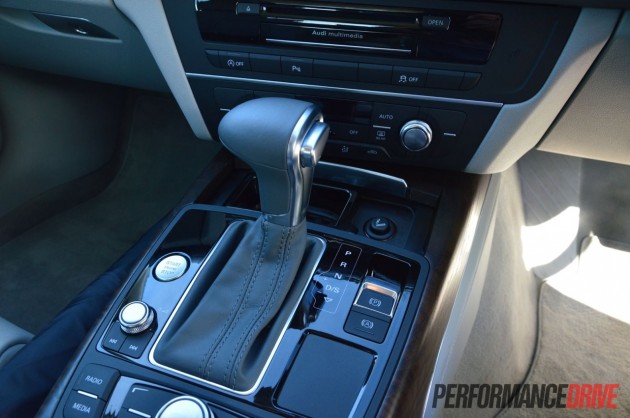 If you love the idea of high-powered turbo-diesel engines, this is the only sedan on sale in Australia at the moment that really embraces the spirit, and spreads apart the boundaries between high power and low fuel consumption. It resets the class benchmark.

Although our drive mainly consisted of faster tempo/active conditions, we see no reason why the A6, in the real world, could get very close to its official average fuel economy rating of just 6.4L/100km.

In terms of negatives, we’re struggling to find any notable snag. The price is steep, however, it is lower than the German rivals. It is just over $10,000 more expensive than the previous 3.0 TDI, but again, the Biturbo is the flagship A6, sitting above even the 3.0 TFSI petrol. The only A6-based model that’s higher in the showroom ranking is the $168,900 Audi S6. Just 50 examples of these are being introduced in Australia, most of which – if not all – have been sold. 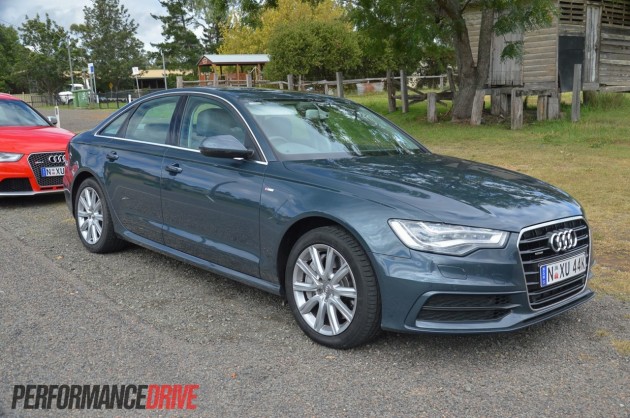