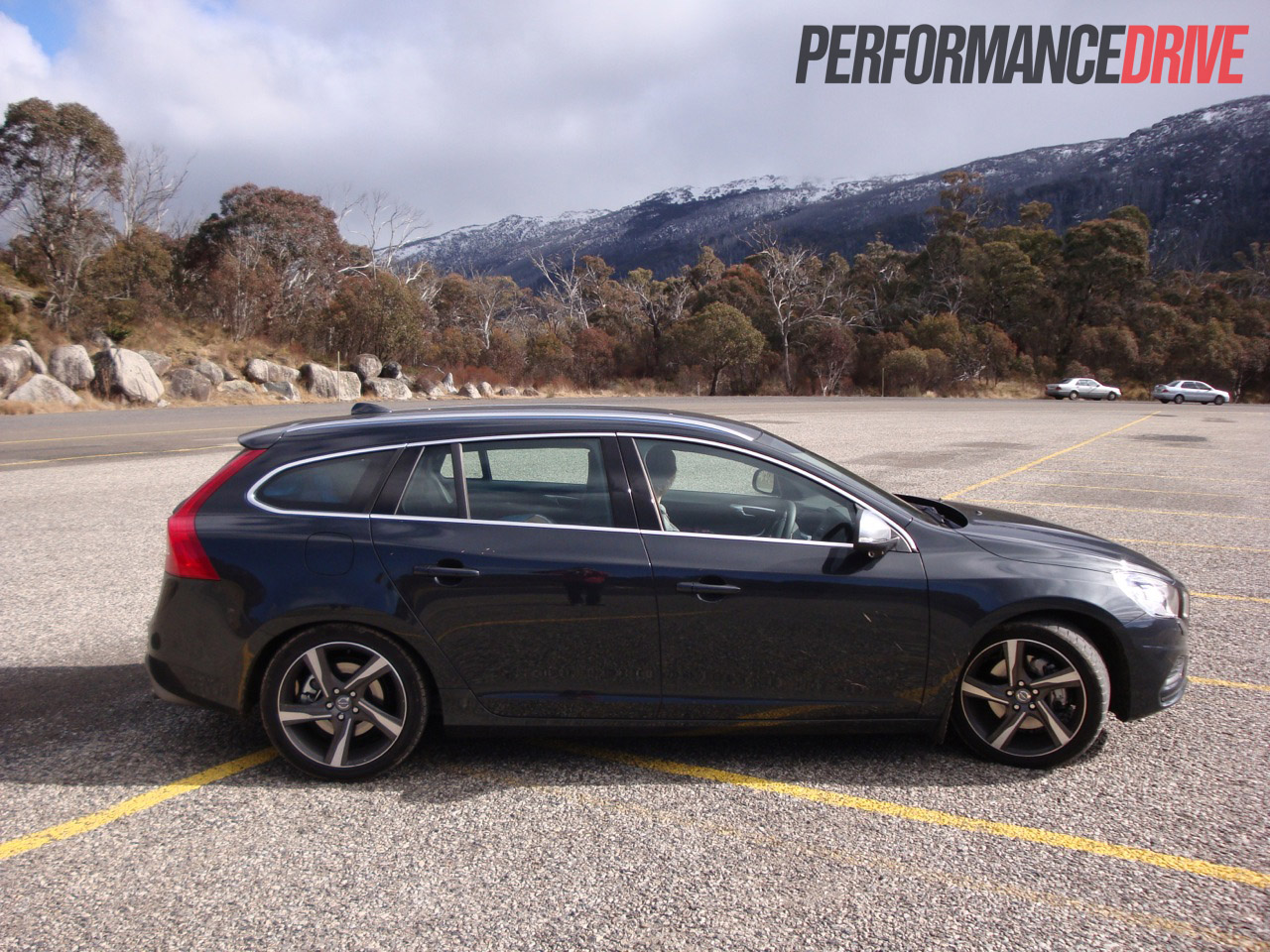 The 2012 Volvo V60 T6 Polestar has to be one of the best sleepers on the market. Can you believe this rather innocent wagon pumps out 242kW of power? It’s the ultimate traffic-light humiliator. 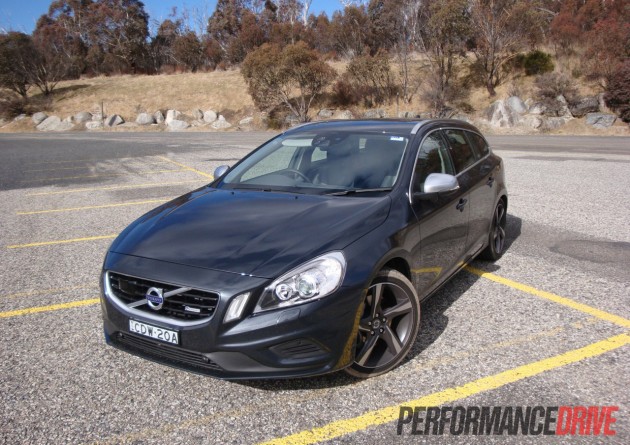 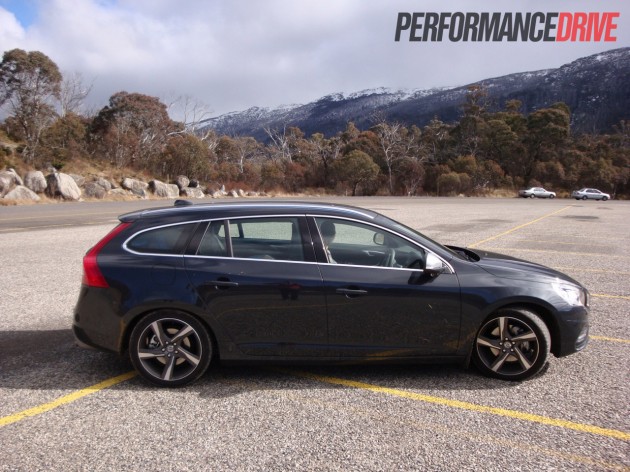 The V60 T6 Polestar comes with a 3.0-litre straight-six turbocharged engine producing 242kW of seamless power, and 480Nm of torque which comes on like a plane taking off. It’s accompanied by a subdued yet whispy roar with plenty of surging g-force. The engine sends power to an all-wheel drive system after going through a six-speed automatic transmission.

Like the S60 T6 Polestar sedan tested last month, the V60 T6 Polestar is the top of the range model, further tuned by Volvo motorsport partners at Polestar. Polestar optimises the performance of Volvos without increasing the certified fuel consumption or affecting the original new-car warranty. It takes away the risks associated with ‘chip tuning’ in other words, while still achieving an enhanced driving experience – and what a fine job the company does. 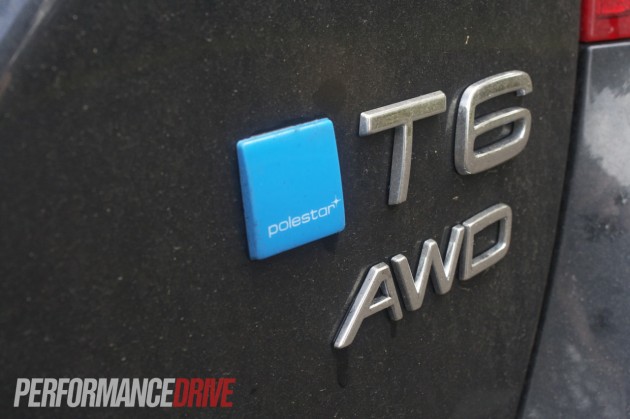 Underneath the Polestar pack lies the already sport-oriented foundations of the R-Design option. This includes a ‘Sport’ chassis with sports suspension, a subtle bodykit with neat front and rear spoilers, and a set of 18-inch machined alloy wheels with darkened highlights.

From the moment you step inside, you’ll immediately say to yourself, “is this really a Volvo?” Forget everything you knew about the brand. From the merciless power on tap, the fool proof traction control system, to those unmistakable Swedish looks; here is one incredibly elegant car.

We thought it’d be only fair to test this one out in its naturally habitat by venturing down to the scenic and icy roads of the Australian Snowy Mountains. 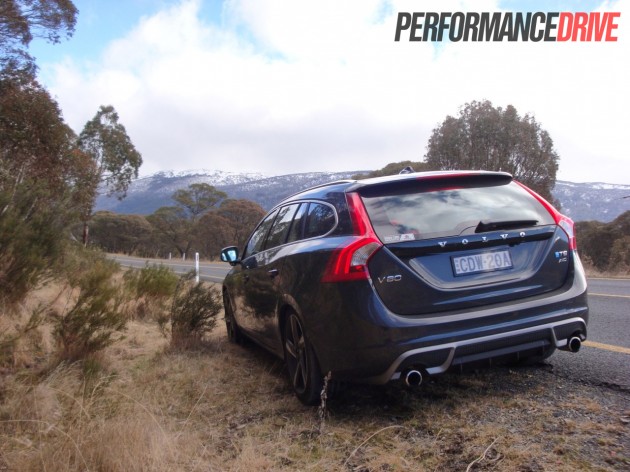 The seats are world class in comfort as far as we’re concerned. They are like lounge chairs; no matter what body shape you are, you fit in snug and comfy. The style and accommodation of the interior is second-to-none too, and, to some degree, leads the automotive industry to the next level.

Highlights of the cabin include a flowing and ‘floating’ dash design, clear yet stylish buttons and controls, and a range of soft-touch surfaces with plenty of stitched leather.

The room inside is decent, and on par with the segment leaders. We carried five slim adults on the trip and they were all well accommodated, with no complaints. The V60 swallowed all of us with higher than satisfactory comfort and room, including the five lots of luggage. 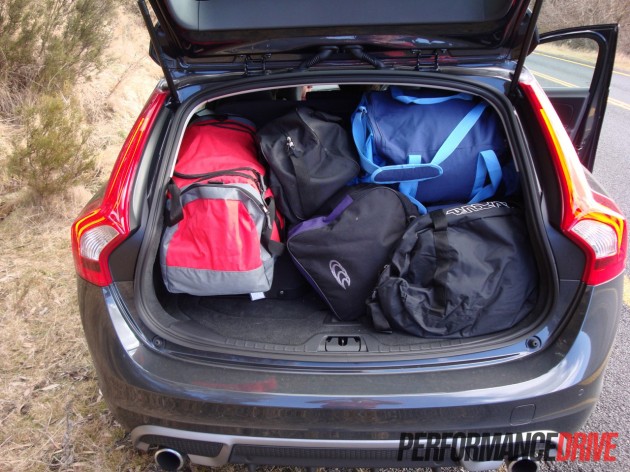 Boot space is plentiful for this segment, with 430 litres of space, or 1241 litres with the rear seats folded down. Again, all of our luggage was taken on board.

Rear vision is not crash hot due to a smallish rear window and big C-pillars, but you needn’t worry too much as the assistance of the standard integrated reverse camera helps to judge your moves, as well as help from the BLIPS blind-spot warning system – more on safety later on. 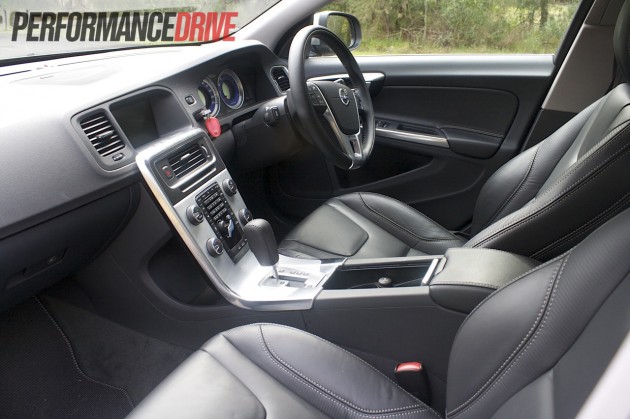 During some of our trip, there was one minor annoying fault with the interior. We had one of our slender passengers sitting on the left side of the back seat at one point, but the seatbelt alarm incessantly sounded, alerting the driver that the centre belt wasn’t fastened, even though that seat was vacant at the time. The only way to fix it was to fasten the seat belt with no one in it. This problem may have obviously been subject to our test vehicle only. 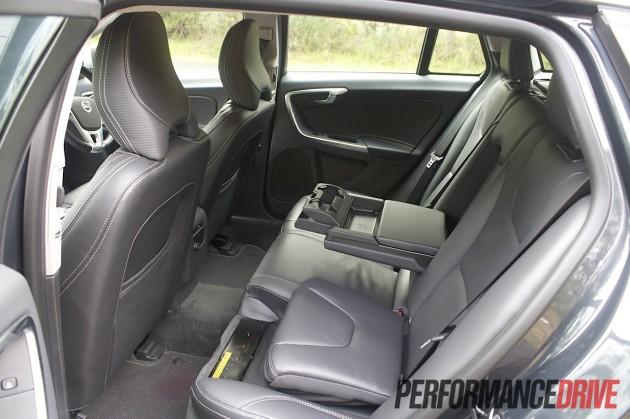 Most in-car settings and functions are controlled through an in-dash LCD interface. Everything from media and audio, to the V60’s safety settings, it’s all easy to navigate through the menus and options. Like most feature-filled and sophisticated cars, we recommend having a play around with it all before driving off into traffic, just so you’re familiar with its processes.

A multitude of safety features are bundled into the top-line V60. Chief among which are the City Safety Avoidance Technology – which is capable of braking the car if a moving object is in front of the vehicle and the driver makes no attempt to avoid it at speeds below 30km/h – Driver Alert Control, Lane Departure Warning, electric stability and traction control, and Sports Mode and Corner Traction Control.

Adaptive Cruise Control with Full Auto Brake is also standard on the R-Design making highway trips very easy and relaxing; you simply set the speed and it will maintain it, or brake and follow a vehicle in front, matching it’s speed. It will also overtake if you simply move into the next lane when the car in front is travelling below your set speed. 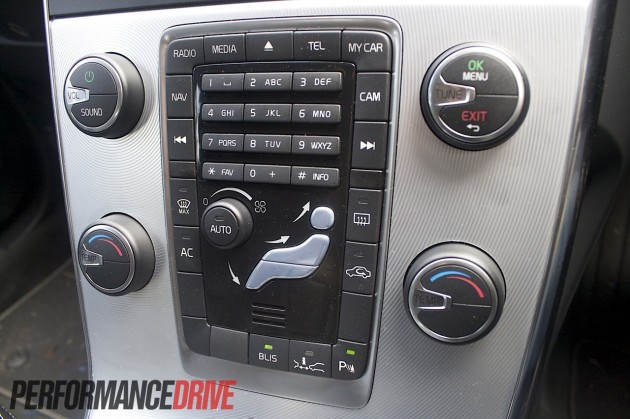 Another helpful feature is the Blind Spot Warning and Tailgating Warning systems. Lights will flash on the dash when a car is in your blind spot or if you are sprawling too close to the car in front. These systems can be turned off at any time with buttons on the dash.

Power from the inline turbo is fantastic, and well delivered with instant response. At 242kW and 480Nm, there are little opportunities on this side of the law to use the full potential of the package. We timed 0-100km/h in just 5.8 seconds, making it one super-quick family wagon. The effortless nature at which it achieves this acceleration is a true credit to the engineers that have created this car. It’s so smooth yet very rapid.

In terms of the handling, the chassis is borrowed from the Ford Mondeo, which is already a well-sorted platform. With the R-Design sports suspension, you can literally throw the car around any corner with plenty of confidence in the grip levels. The Haldex all-wheel drive system also means you can jump on the power mid corner and it will rip you right out of there with no fuss. 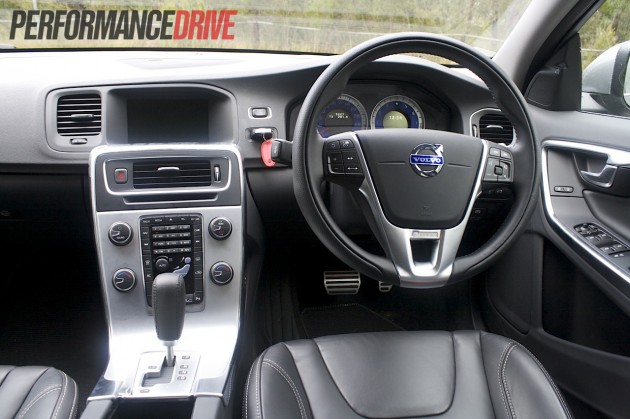 There is some very gentle torque steer and tug through the steering wheel when you really jump on it, but it’s not enough to negatively impact the confidence of it all in any way. It simply lets you know that you’re still in charge.

Even up and down bendy hilltops, the stability control system is not at all bothered. It proves the foundations of the setup is already capable, before the need of any electronic assistance programs.

Considering all that unrelenting power and torque, fuel consumption is nothing to be ashamed of. On our trip we averaged 9.5L/100km, and that was with five adults and their ski luggage.

It is surprising to see a European car with so much power that is content with running on 91 RON standard petrol too, as well as being happy to run on 85 per cent ethanol blended fuel. It shows it is still a modern engine – also borrowed from Ford – and that it is thinking of the environment.

Overall, we could not get enough of this car. With help from Polestar, it ticks all the boxes – seamlessly powerful, economical, high levels of luxury, and incredibly elegant and subtle. What a car. The fact that it’s a turbo wagon only enhances its ‘coolness’.

This is one daily driver we’d love in our garage. 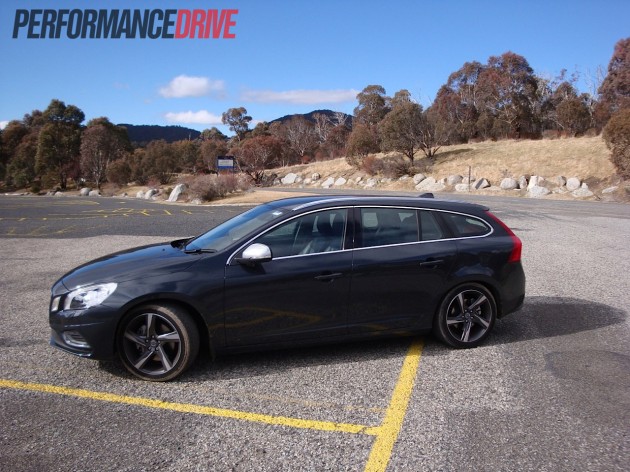