Toyota has launched the new 2012 Toyota Corolla in Australia after revealing the new model at the 2012 Australian International Motor Show, currently underway. The new model gets a $1000 price cut, new styling, and an optional seven-speed auto transmission. 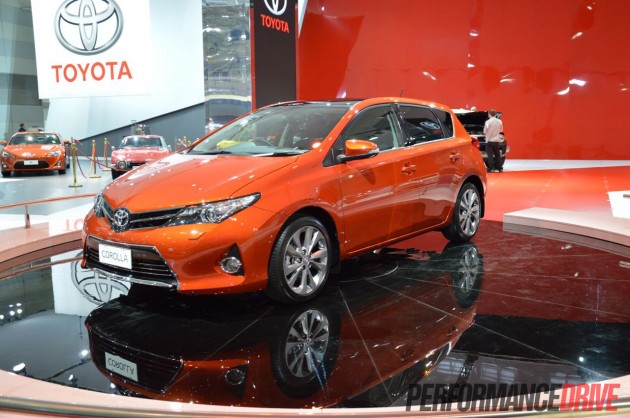 The new version of one of the world’s most popular vehicles comes in four different variants; the Ascent, Ascent Sport, Levin SX, and Levin ZR. All come with a revised 1.8-litre naturally aspirated four-cylinder petrol engine producing 103kW (up 3kW from the outgoing model), matched to either a six-speed manual or a new seven-speed MultiDrive S-CVT auto transmission with sports mode.

Even though the engine is very similar to the outgoing unit, Toyota promises improved economy and performance with an average fuel consumption rating of 6.6L/100km for the auto (10 per cent more efficient). The Corolla now also comes with capped-priced servicing so there’s no surprising bills at the workshop.

On the outside, the 2012 Corolla gets Toyota’s latest design language, showcasing sharper lines and contours, a lower overall height, and a sloping bonnet to help maximise economy and aerodynamic efficiency.

Other changes for the new model include a stiffer body shell, altered suspension and steering, and a new seating position. The centre of gravity is also lower, resulting in a sportier drive. Even though the Corolla is typically a Japanese car, Toyota says lots of engineering and development on the new model comes straight out of Europe.

Inside, the 2012 Corolla is more spacious overall compared with the outgoing model and it has been engineered to be quieter during driving. The interior offers increased legroom and headroom, and despite the boot being slightly smaller – 280 litres instead of the current 283 litres – it is said to be more useable and space efficient thanks to a longer cargo floor.

As for the sporty higher end Levin models, both feature 17-inch alloy wheels, a 6.1-inch LCD touch-screen multimedia interface (also seen on the Ascent Sport) with satellite navigation and a reverse parking camera (Ascent Sport only gets the reverse parking camera). The Levin variants also get a sporty bodykit with black sections in the front end, fog lights, as well as carbon fibre-style interior trimmings and a sports instrument cluster.