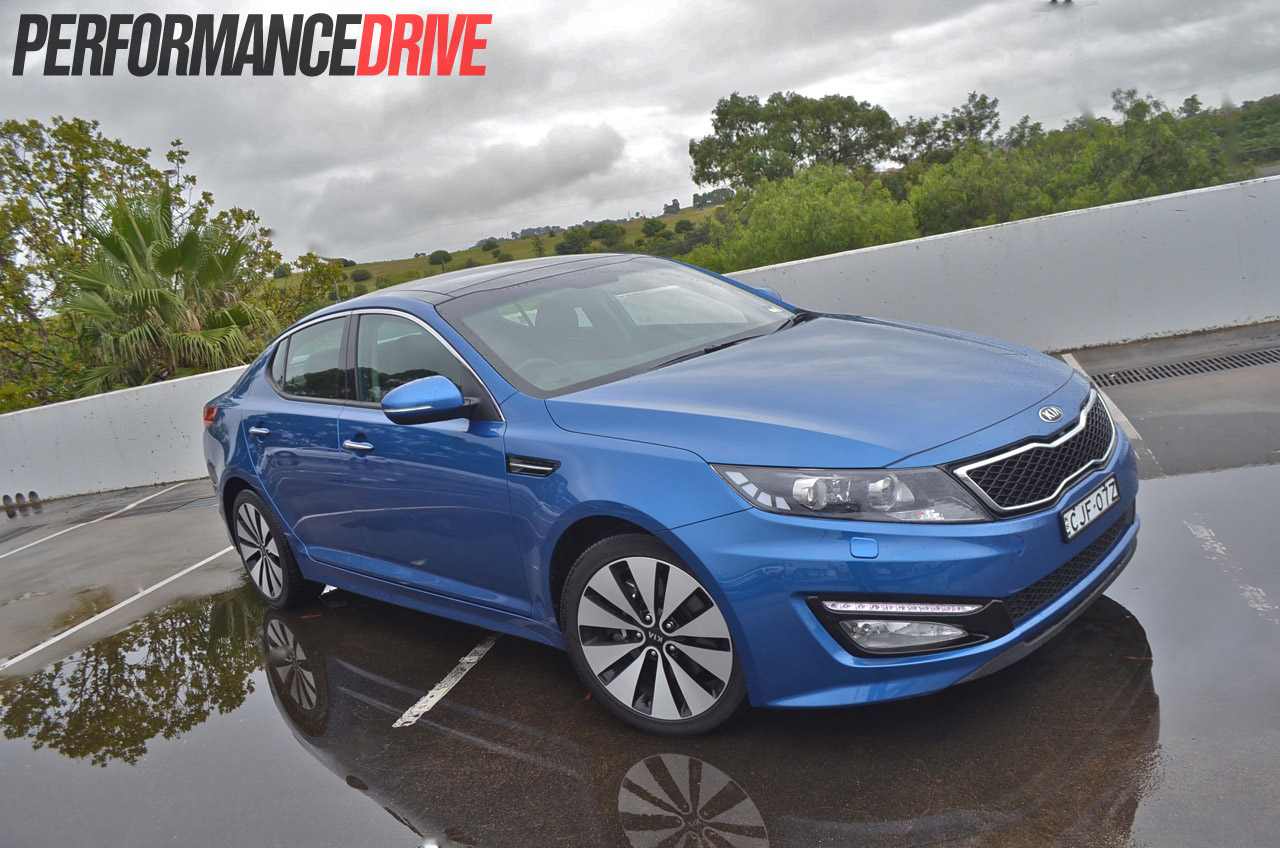 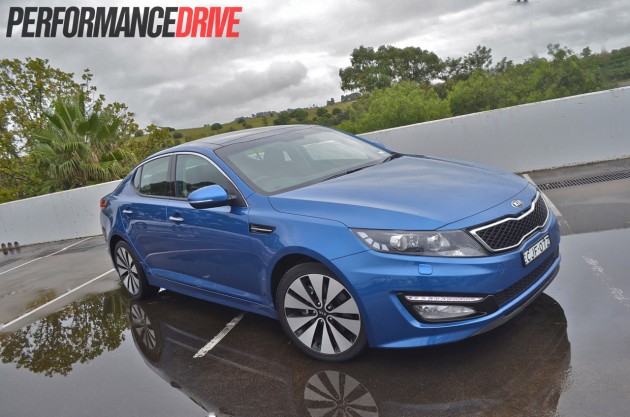 The Kia Optima is quite possibly the funkiest-looking mid-size sedan on sale. Even though this latest incarnation of the Optima has been around since 2011, it’s still very modern/current and appealing to the eye.

Under the hood of all Optima variants lives a 2.4-litre four-cylinder petrol engine that produces 148kW and 250Nm. All Kia Optima models come equipped with a conventional six-speed automatic gearbox.

The Optima, as like all Kia motor vehicles, also comes with a standout five-year unlimited kilometre factory warranty. 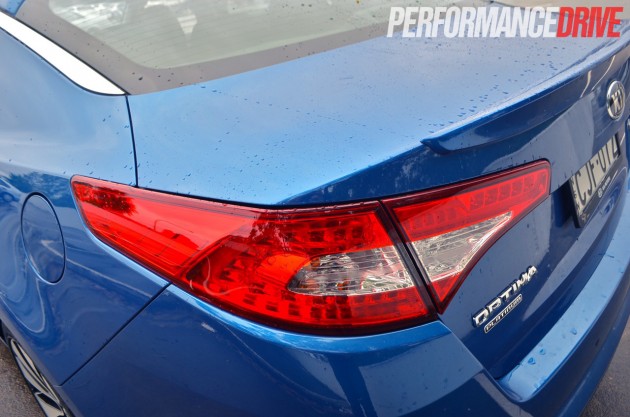 The Platinum variant has to be one of the best-equipped sedans on the market, for the price. Creature comforts include dual-zone climate control, ventilated heated and cooling power front seats, satellite navigation, a panoramic glass roof, leather seats front and rear, and wood-style trim inserts.

Seated in the driver’s spot, you’ll notice all the instruments are aimed at the driver for a cockpit kind of feel. Up front in the centre of the dash is the touchscreen interface that is used to access the sat-nav and the very impressive eight-speaker Infinity audio system, featuring Bluetooth, MP3, USB, and aux-in connectivity.

The leather trim is right up there for comfort offering large sedan-like headroom and legroom, though, the front seats are a little flat and could do with more bolstering for when you’re in the bends.

To sit in and mosey your way around the ‘burbs, the Optima is a very comfortable road car that provides a sense of luxury at a bargain price. Boot space is also very generous at 505 litres.

The driving position is well thought out with the steering wheel falling nicely into your lap, and the armrests on either side of your body are the perfect spot for your elbows to take a hard-earned break.

Exterior colour choices come in the way of Snow White Pearl, Bright Silver, Ebony Black, Platinum Graphite, Satin Metal, Santorini Blue, Spicy Red, with only the choice of black leather for the inside.

For added convenience the steering wheel features controls for audio, cruise control, Bluetooth, and an ‘ECO’ button which encourages improved fuel efficiency through things such as changing up gears earlier.

The exterior is one of the most impressive features of the Optima. The front end uses the ‘tiger nose’ Kia front grille, LED running lights, and projector headlights. Aggressive front and rear bumpers, side skirts, a boot lip spoiler, and sporty-looking dual exhaust outlets mesh very well to ensure the Optima stands out in a crowd. While the wheels look good at the moment, we might look back in five years and think ‘what were they thinking?’.

The Optima has received a full five-star ANCAP safety rating, having scored an impressive 35.58 out of a possible 37 points in recent tests. No less than six airbags are fitted, as well as active front headrests, a reverse camera, stability control, and hill-start assist. 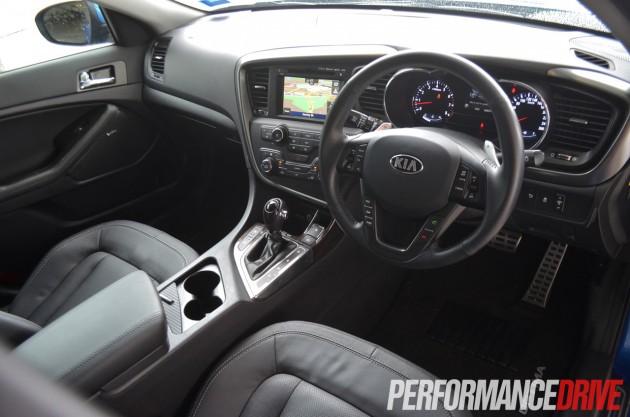 The 148kW 2.4-litre four-cylinder engine does a commendable job of pushing the Optima along, however, given how aggressive it looks from the outside you almost expect it to have a little more poke; a gutsier torque curve would add a different dynamic and more appeal to the Optima.

Nothing really happens under 3000rpm, so if you want decent movement you have to string the engine right out. The problem with this is, it’s not exactly the most rewarding engine sound.

Around the city the Optima is powerful enough to dart in and around traffic, however, under some circumstances it can feel a little flat when trying to tackle long freeway hill climbs and tight-twisty bends in a hurry. We timed 0-100km/h in 8.8 seconds, so it’s definitely no slouch.

The six-speed gearbox is eager to hunt down gears to provide bursts of acceleration. It’s also keen to up shift gears as quick as possible in the name of economy when driven easy.

The steering wheel features paddle shifters in case you feel like getting frisky with the tarmac – even if they do feel a little PlayStation-like to use, it’s still nice to have the option to control gears manually without taking your hands off the wheel.

The Optima doesn’t shy away from carving up the open road. It’s Australian-specific suspension tune absorbs our roads well, and feels surprisingly sure footed when you up the ante. It can, however, feel a little cumbersome in fast sweeping bends, becoming eager to push the front wide if you expect too much. Feedback through the wheel isn’t class leading, but it’s certainly not terrible.

Jumping on the stoppers time after time proved to show the Optima is more than up to the task in the braking department, resisting fade, and maintaining good pedal feel.

One thing that needs to be pointed out is the oversensitive stability and traction control. If you happen to pull out of a street and drop one of the front wheels into a pot hole, hit a little bump, or slightly spin the inside wheel, the system seems to go into panic mode and kills power for one to two seconds.

In our case, this happened to us and we had a truck facing the side of our test car as we tried to pull out of a side street. Luckily it swerved around us. A slight spin of the wheel in wet conditions also seems to kill power unwillingly. Being without any acceleration, and with traffic coming your way (fast), isn’t a nice situation to be in. The system is too overcautious in our opinion. 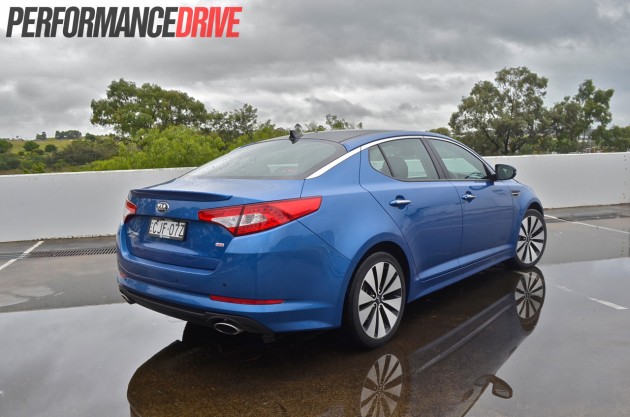 The Optima is one of those cars that’s rewarding to look at when parked in your driveway, and drive, thanks to decent driving dynamics and loads of creature comforts laid out in a relaxing cabin atmosphere. You could argue that the trim is a bit on the plastic side, but, it doesn’t detract from its overall build quality and functionality, which is quite good.

A beefier engine certainly wouldn’t hurt, but that’s when you just click on the heated seats, slide back the roof blind, turn up the punchy Infinity stereo and forget all about your hard day at work.

Meet the funkiest mid-size sedan on sale. Based on looks and standard equipment alone, it’s a very viable option for those seeking affordable luxury in the mid-size segment.

CONS:
– More power and torque would be nice
– Cabin is a little too plastic
– The wheels aren’t to everyone’s taste
– Traction control is way too oversensitive 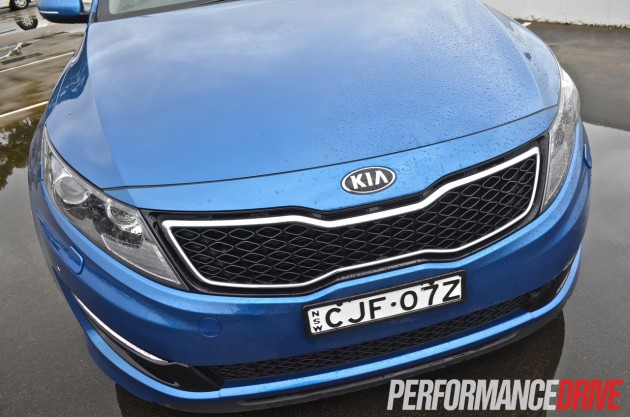