MINI is set to unveil the all-new MINI Countryman JCW (John Cooper Works) edition at the 2012 Geneva Motor Show in March. The company has released these first preview images as a tease. 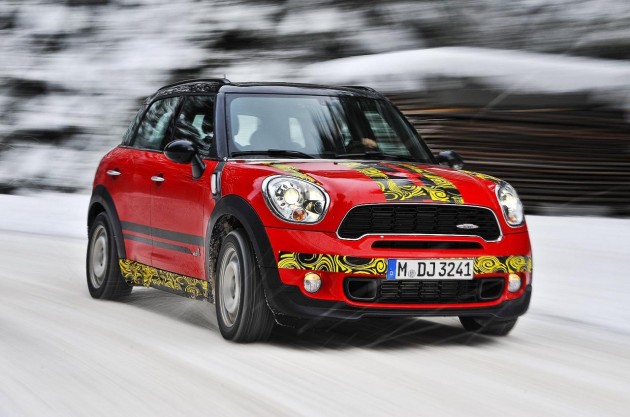 The MINI Countryman JCW will be the performance version of the humble yet plucky four-door four-wheel drive MINI wagon. With the JCW kit it gets styling changes, a more powerful engine, and various interior revisions to set it apart from the normal Countryman S.

Under the bonnet will sit a 1.6-litre turbocharged four-cylinder engine, as seen in the S version, only power will be boosted up to 155kW and 280Nm of torque. This will help the wagon sprint from 0-100km/h in around the 7.0-seconds mark.

Suspension will also be retuned with larger stabiliser bars and a 10mm drop in ride height to provide a more sporty compliance, enhancing the Countryman’s handling and improving its overall cornering potential. Bigger brakes will also be added to ensure the pocket rocket pulls up on demand.

Other features will include a freer flowing exhaust system – sure to provide all the cracks and pops of the Cooper-based JCW – as well as a full bodykit, alloy wheels, and an array of distinguishing JCW badges and accessories.

All is expected to be revealed at the Geneva Show in March. Stay tuned for more updates, and feel free to browse through MINI’s teaser images below in the meantime.