The all-new 2012 Honda Civic will arrive in Australia in March. The new VTi-L is now the base model and is up to $1500 cheaper than the outgoing VTi base model, which is no longer in the lineup. The new VTi-L pricing undercuts the previous VTi-L by $3700. 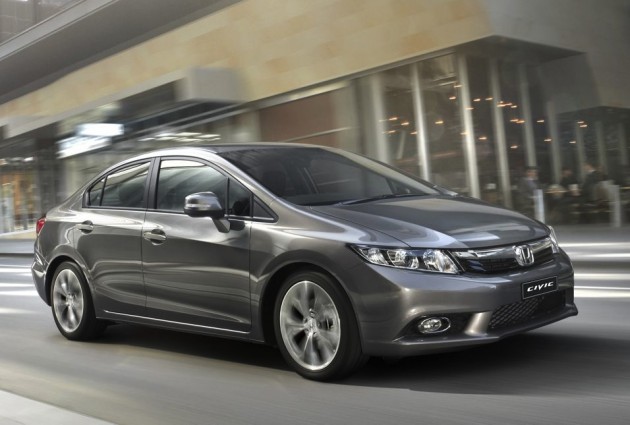 This is the ninth-generation Honda Civic now, and it will be available in three trim levels; the VTi-L, Sport and Hybrid, dropping the previous VTi entry variant. Power for the 1.8-litre VTi-L has risen by 1kW, to 104kW, while the 174Nm torque figure remains the same.

The 2012 Honda Civic Sport comes with the 1.8-litre four cylinder carried over from the previous model. It produces 114kW, while torque is up 2Nm to 190Nm. It’s no longer available with a five-speed manual transmission though, only a five-speed auto.

Fuel consumption for both variants is said to have been improved over the previous models, however, specific numbers are yet to be released. Honda Australia director Stephen Collins recently said,

“We are confident our customers will agree that the Civic is a brilliant package and delivers exceptional value for money. The Civic will be in Honda dealerships in early March.”

The 2012 Honda Civic Hybrid gets a new petrol engine, and new lithium-ion batteries. Petrol power comes from a 1.5-litre i-VTEC four-cylinder – over the previous 1.3 – and produces 82kW (down 5kW) and 172Nm (up 2Nm). Honda says the new powertrain provides improved acceleration over the previous 1.3 model.

PerformanceDrive aims to have a full review up in the very near future.

Full pricing details are as follows, excluding on-road costs (brackets are compared with previous model of the same variant name with the same transmissions):