According to various international reports, the new 2012 BMW M5 will come with the option of a six-speed manual transmission. A ceramic brake option is also said to be on the cards, while BMW has confirmed an Active Sound Design technology which aims to heighten in-car aural excitement. 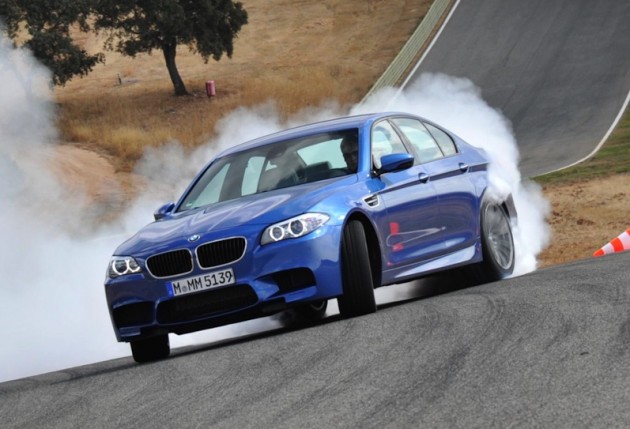 Unfortunately for Australians, the manual transmission option is only likely to be available in the US market. The last time we saw a manual transmission for the BMW M5 was in 1999, with the awesome E39 5.0-litre V8 model. An automatic was not an option, in fact. Official confirmation is yet to be announced though, so we’ll keep you updated.

As for the braking package, various publications around the world have already been given exclusive access to the new 2012 BMW M5, and even been handed the keys on the race track. BMWBLOG, for one, has, and says there’s talks of the new model coming with a ceramic fade-resistant brake package option. BMWBLOG says not that the new M5 needs it though, pointing out the already incredible 400mm cross-drilled, six-piston standard items. This option could possibly become available in Australia. Once again, we’ll keep you posted.

An interesting feature that has been confirmed for the new 2012 BMW M5 is something BMW calls Active Sound Design technology. It’s quite interesting, BMW says the system uses the M5’s in-car stereo to recreate sounds from the engine when the go pedal is pushed hard.

We’re not sure, but surely the BMW M5 already creates an awesome note all by itself? BMW says this technology, which is connected and synced to the engine’s ECU, provides cool, calm and quiet motoring on the highway, but adrenalin-inducing sounds when things get frisky. BMW explains,

“The system’s digital signal processing exchanges data directly with the engine management, allowing it to reflect the engine’s revs and torque, and the car’s speed over the road. The result over a smoothly driven journey is a discreet soundtrack in keeping with the harmonious and assured characteristics of the V8 powerplant. A stamp on the accelerator, meanwhile, prompts an immediate audible response to match the instantaneous – and typically M – burst of power from beneath the bonnet.

“In generating its signals, Active Sound Design takes its cues from the firing sequence of the eight-cylinder engine and the frequency range of the exhaust system. This gives the driver an extremely accurate impression of current engine load and an even more intense sensation of the V8’s high-performance characteristics. At the same time the Active Sound Design control unit ensures an even spread of sound across all five seats of the new BMW M5, while observing the legal guidelines governing noise emissions inside and outside the car. The characteristics of the sound produced by the technology also adjust to the engine settings selected by the driver. For example, switching to “Sport” or “Sport+” mode sharpens not only the engine’s responsiveness but also the acoustic experience inside the car.”

(image thanks to BMWBLOG)