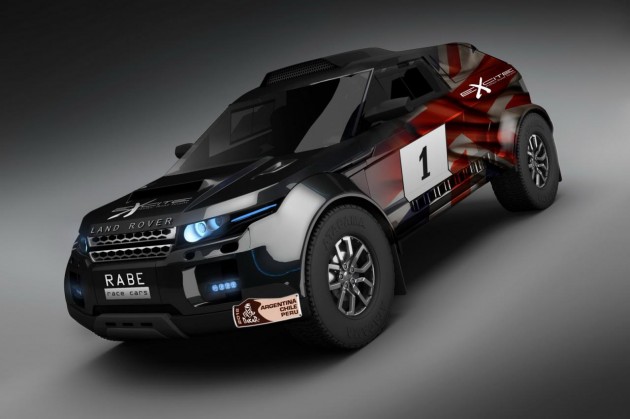 For the 2013 Dakar Rally event, the Excite Rallye Raid Team will run three of these purpose-built rally monsters. Each will feature a full tubular chassis with a Range Rover Evoque body, it will use a BMW-sourced N57 3.0-litre diesel engine with 205kW and 650Nm (with an FIA restrictor), a ZF six-speed transmission with a two-speed transfer case, eight Reiger coil-overs for suspension dampening, 16-inch Compomotive Atacama RallyRaid wheels with BF Goodrich desert race G series tyres, and will use a 260-litre fuel tank to give the car legs to travel long distance.

“RaBe Race Cars has years of off-road motorsport experience at every level, from club to International works teams. In fact we have a family motorsport tree that is celebrating its 100th Anniversary of continuous motorsport involvement in 2012. The last 15 years have been devoted to Desert racing and achieving not just a finish but top honours at Dakar. Little known outside of the bivouac of Dakar, we have built cars for many other teams who race under their own colours and logos. The partnership with the Excite Rallye Raid Team is part of our desire to push our skills to the top of our sport.”

As previously mentioned, three Range Rover Evoque desert rally cars will be built by RaBe Race Cars D4 WN5, and are to be piloted by Martin Rowe, Andrew Coley, and John Hardy. We had a look close look at their profiles, and found each has a very credible resume indeed.

Martin Rowe, previous British, Chinese and World Rally Championship winning driver, has works drives for Peugeot, Renault, Ford and Porsche up his sleeve, plus testing and development roles within both the Ford and Subaru works teams.

Andrew Coley first started rallying in 1998. He was chosen as a reserve driver for the 2006 NISMO Dakar Team, and was crowned 2008 group A6 British National Rally Champion.

And lastly John Hardy, who has over 20 years British National Rally Championship experience behind him, and in his time has helped many British Championship drivers with car setup and driver training.

The Dakar Rally is arguably the toughest rally event on the planet. It’s one of those events that really tests the product, and the driver. It is run over 14 days in various parts of South America, and covers more than 9000kms of territory in some of the most intense conditions known to man.