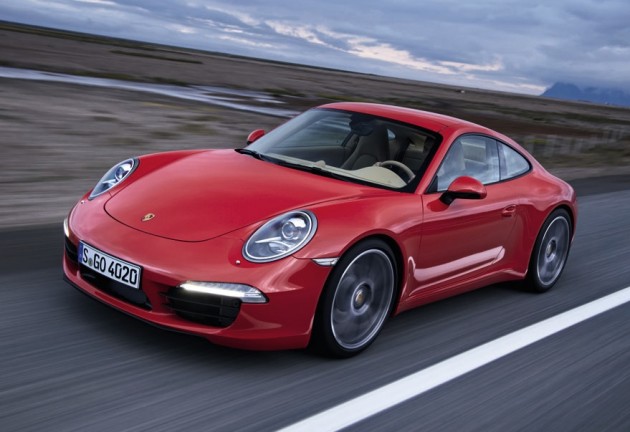 Images of the new 2012 Porsche 911 were leaked onto the net last week, showing the new 911 in all its glory, without any camouflaging or disguise. The company has decided now that all is revealed, it might as well release all the details. Or maybe this was Porsche’s marketing plan all along? Anyway. Let’s get to the juicy stuff that has been revealed about the new 911, we’ll get to the specific model details later on.

First up, Porsche has confirmed the new 911 features a longer wheelbase by 100mm compared with the outgoing Porsche 911. Additionally, the new 911 features a lower roof height, as earlier reports indicated, as well as a wider front track. Even though the body has grown in length, Porsche has shaved 45kg from the outgoing Porsche 911’s body weight, with help from extensive use of aluminium-steel composite materials.

The shape of the 2012 Porsche 911 may look very similar to the outgoing model, but Porsche has managed to retain the overall aerodynamics of the body, which sits with a 0.29Cd rating. The company has reduced front and rear lift considerably though, to a point where there is almost zero lift. Apart of this advance in aerodynamics is helped by the addition of new rear spoiler which is not only wider than the outgoing 997 911 but it is also variably adjustable. The new 911 body is also said to offer increased structural stiffness and integrity compared with the outgoing 911. 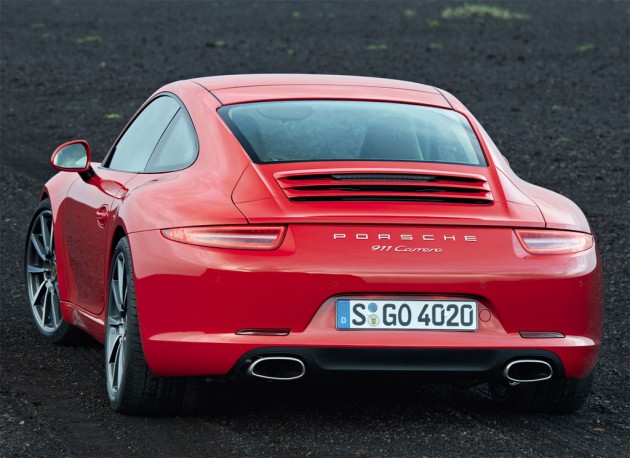 Other highlights that only a true 911 connoisseur would notice on the exterior is the new placement of the side mirrors. On the 2012 Porsche 911 these are placed on the upper door skin, along the top shoulder of the door, whereas on the existing 997 911, the side mirrors are placed in a separate mount in the corner of the side windows, like most cars on the market. Apart from the rather obvious revised rear end layout, the new Porsche 911 also gets a three-tier engine cover vent rather than the existing four-fin vent.

As for the 2012 Porsche 911 interior, we already know there are vast changes to its layout and design. It now features a raised centre console that houses the transmission lever and a completely new fascia with a central LCD infotainment screen, a five-gauge instrument cluster with the traditional tacho mounted in the middle (the cluster also includes a multifunction LCD display), and new door trims with a higher quality look and silver trimming highlights. Porsche says the overall design of the cockpit, particularly elements centered around the driver, were inspired by the Porsche Carrera GT supercar. 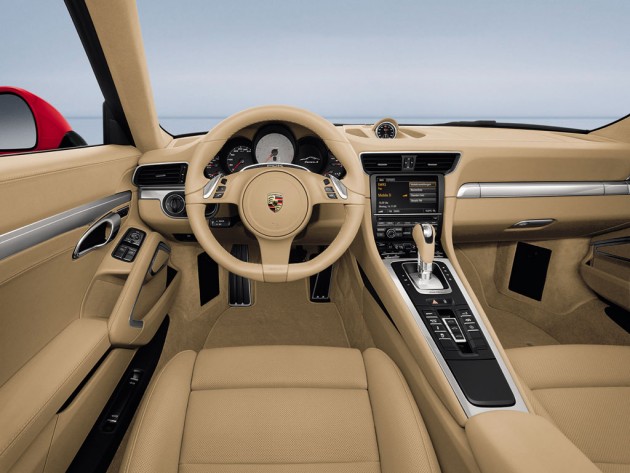 On to the new Porsche 911 trim levels, beginning with the 2012 Porsche 911 Carrera. The new base model Carrera will come with a 3.4-litre flat-six engine developing 257kW of power. The all-new engine will be available with either a seven-speed manual transmission or a PDK dual-clutch sports automatic transmission. Porsche says the new 911 Carrera will come with a fuel consumption rating of just 8.2L/100km (in PDK guise), making it 1.6L/100km more economical than the existing Porsche 911 Carrera. The new 991 911 Carrera is also capable of doing 0-100km/h in 4.4 seconds with the PDK transmission, and 4.2 seconds when optioned with the Sport Chrono Package with Launch Control.

Next up in the trim levels is the new 2012 Porsche 911 Carrera S. As previously speculated, the new S will come with a revised version of the 3.8-litre flat-six engine developing 294kW. The 911 Carrera S is capable of doing 0-100km/h in just 4.1 seconds (with the PDK), and 3.9 seconds with the optional Sport Chrono Package with Launch Control. Remarkably, the new Porsche 911 Carrera S has a fuel consumption average of 8.7L/100km, making it almost as fuel efficient as some four-cylinder hatch backs.

Porsche Australia is yet to reveal pricing details for the new 2012 Porsche 911, but US prices will kick off at $82,100 for the 911 Carrera and $96,400 for the 911 Carrera S. Look forward to our comprehensive coverage of the 2011 IAA Frankfurt Motor show for more details. We’ll keep you posted on Australian specifications and pricing as soon as possible as well.