The Insurance Institute for Highway Safety (IIHS) in the US has implemented a rather serious new crash testing procedure. Many new luxury vehicles has failed the test, except for the latest 2012 Volvo S60, which has recently been given the highest rating of ‘good’. 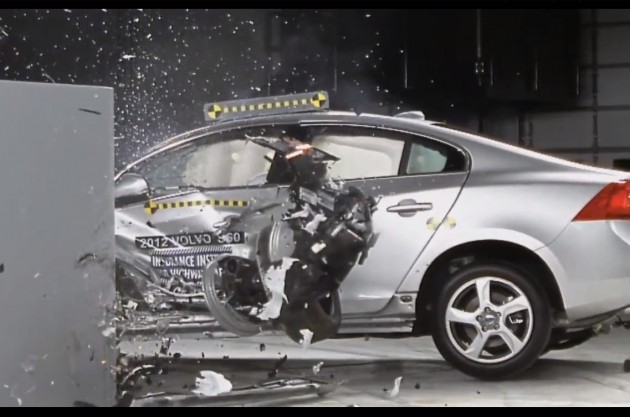 The new testing involves a front-end offset collision with a solid barrier, straight into the driver’s side nose. The test is conducted at 40mph (64km/h), and is said to more accurately replicate common accidents that are killing motorists on the roads.

A number of top-line vehicles have failed the new test, including the BMW 3 Series and the Volkswagen Passat CC, both of which have scored a ‘marginal’ result.

The Audi A4, Lexus IS 250/350, and the Mercedes-Benz C-Class have been rated as ‘poor’. The Volvo S60 is the only car sold in Australia that has passed the test so far.

We know it’s not exactly performance-related news but if you’re in the market for a sports sedan, these latest results do prove the Volvo S60 is clearly the safest of them all. (Click here for our full 2012 Volvo S60 Polestar review and video.)

Slow-motion car carnage is always intriguing to watch. Click play below to take a look. The first video is an overview of the new testing procedure, while the second video is of the Volvo S60.

As you can see, the test rips the front wheel and hub clean off the car, however, inside, it almost looks like a comfortable cushioned paradise in the Volvo.