Imagine standing trackside witnessing these two. Both the new Pagani Zonda R Evo and a Pagani Huayra have been spotted on the Nurburgring recently, during a photo shoot. 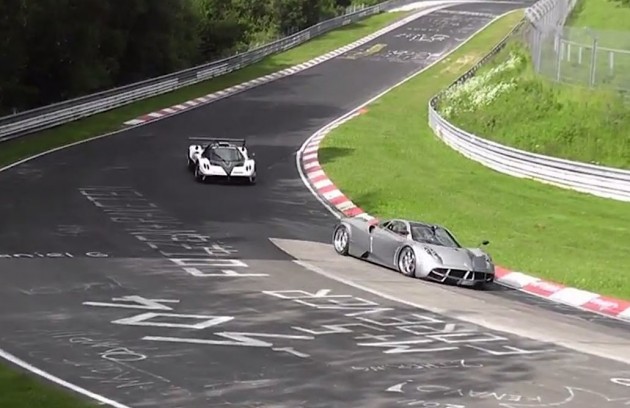 Just listen to that beautiful V12 engine of the Zonda R Evo. Even the 515kW twin-turbo Huayra has a spooling jet quality about it, in terms of sound and acceleration. It sounds like it is literally ready to suck up the road.

The Pagani Zonda R Evo is expected to be the last Zonda (no really). It features the same powerplant as seen in the last, last Zonda, the 760 RS, producing 760PS (559kW). It’s matched up to a six-speed sequential transmission.

The ‘normal’ Zonda R holds the non-street-legal lap record at the Nurburgring with a time of 6:47.50. Could the slightly revised Evo version duck under that time? It’s understood the company was doing a photo shoot at the ‘Ring at the time this video was captured. Maybe an upcoming press release, with the photos, will announce a new lap record?

Pagani is planning on unveiling the R Evo at the Goodwood Festival of Speed this weekend. More information is expected to be announced.

In the meantime, you simply have to check out the video below. It will send goosebumps down your spine.