Is it a waste? The question just keeps circulating around inside our heads. This Lexus IS F being crushed was subject to strict Californian road laws recently, as the owner was allegedly caught ‘street racing’. 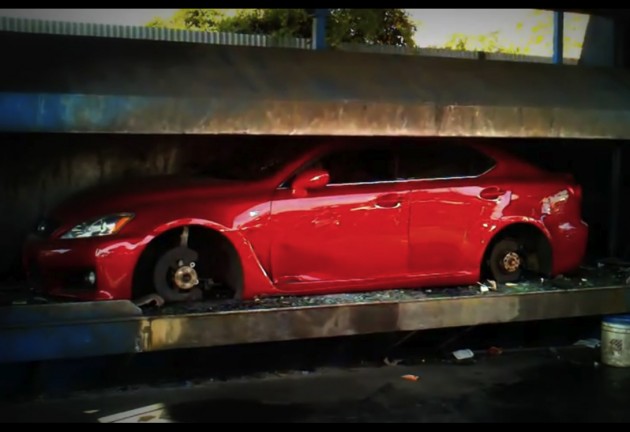 It just seems such a waste to us, crushing a perfectly good piece of engineering which no doubt took many hours to build. And all for what, to save lives? It’s a very controversial topic, the act of crushing owner’s cars, as the question keeps circulating; will it really deter the owners from breaking traffic laws again?

Not likely. To us, it’s just a waste of a car. At least with this example it appears the wheels and Brembo brakes were taken off the Lexus IS F to save them from complete waste.

As a number of critics point out, wouldn’t it be more beneficial to the local community, and to the local government, if cars like this poor Lexus IS F were simply confiscated from the owner and then auctioned off?

The revenue raised from the auction could then be put to good use and fed back into councils, and contributed towards improving various aspects of society.

Australia currently has similar laws in place, called Anti-Hoon laws. So far in Victoria, one of Australia’s strictest states in terms of traffic laws, police have confiscated 1,038 cars under the latest version of the law. The law gives police the power to impound any offender found guilty of ‘hooning’ to impound their car on the spot for 30 days.

If the car is found to be unsafe or seen as a potential hazard to society, then it has the potential to be sent off to the crusher.

We’re not sure if a new Lexus IS F would be considered to be unsafe if it were in Australia, it could only be a maximum of three years old.

Anyway, click play on the video below to see a Lexus IS F crushed to death.