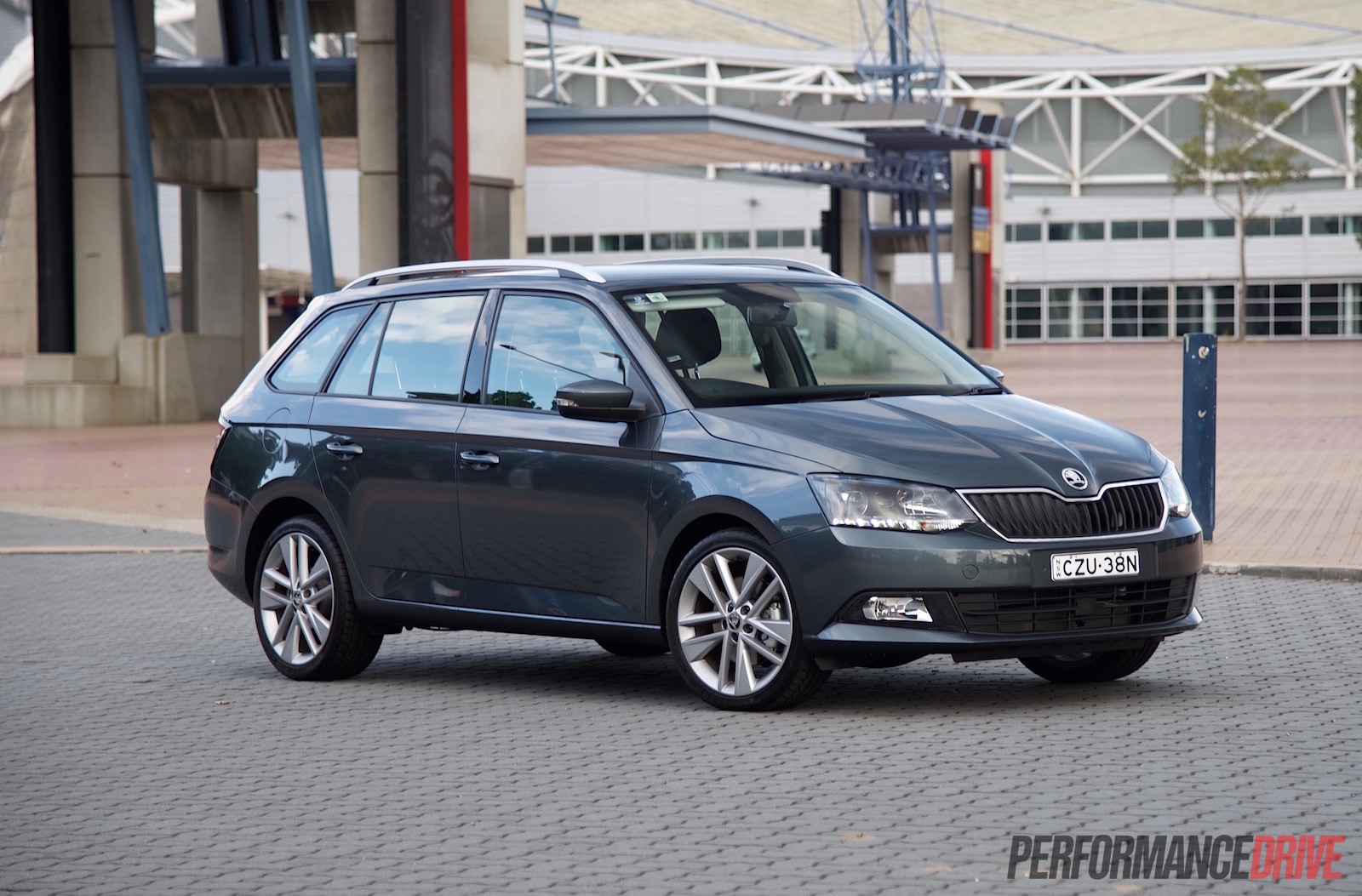 SUV’s have saturated our roads to the point of mind-numbing banality, so here’s the 2016 Skoda Fabia 81TSI wagon as a refreshing reminder that there are still some practical alternatives for those willing to look. 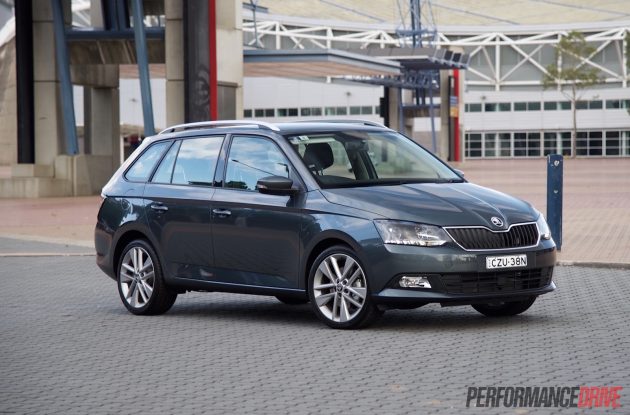 The new Fabia is a bit of a bitsa, based half on the Volkswagen Polo’s PQ25 platform, with some components from the Golf and Passat’s MQB matrix thrown in for good measure. The previous Fabia was also available in both hatchback and wagon forms, starting well under $20,000, but it had a more round, narrow and slightly awkward appearance – in stark contrast to the newer model’s crisp, understated lines and premium Euro-wagon look.

It’s as though Skoda has distilled the proportions and feel of an Audi Avant into a demure B-sized package. The overall appearance is hunkered down on the optional 17-inch alloys as featured here, aided by a sharp beltline.

There is no other contender in this class which offers the wagon body style; you have to move up a size to Hyundai i30 or VW Golf to get one, or up another size again to the similarly handsome Holden Commodore Sportswagon. 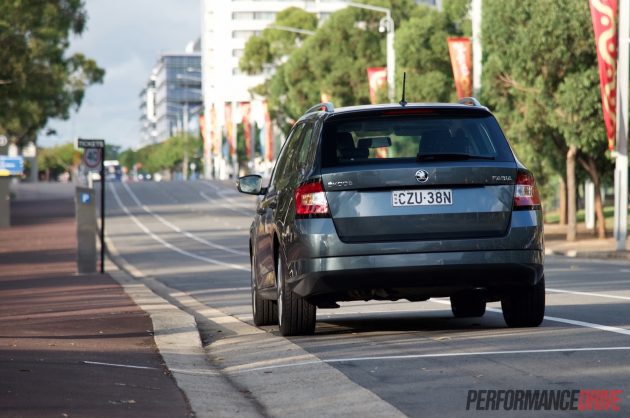 The new Fabia opens at $15,990 for the 66TSI hatch, with the lowest state of tune for the sole 1.2-litre turbo four on offer, at 66kW and 160Nm. This setup is married exclusively to a five-speed manual. A wagon 66TSI can be had with this combo for $17,140, making it Australia’s cheapest wagon.

If you don’t want to shift your own gears, then you find yourself on the wrong side of $20k at $20,290 for the hatch and $21,440 for our wagon here. What you do get are some extra herbs (81kW and 175Nm), with the torque occurring at the same 1400-4000rpm plateau. The gearbox is Volkswagen’s latest generation seven-speed DSG twin-clutch auto. All models are rated at 4.8L/100km on the ADR combined cycle.

The wagon measures just over 4.25m long, with 505L of space seats up or 1370L with them down, but load space is impeded by the fast D-pillar; a slight penalty for all that style, plus the rear seats could use a trick mechanism like Honda’s Magic seats, as they don’t fold flat and can make for awkward loading.

The Fabia features lots of delightful touches throughout though, such as under-seat storage compartments, a lined rubbish bin in the driver’s door pocket, a cargo blind, and an array of nets and load-securing fixtures. Best of all, you are greeted by a full-size spare tyre under the boot floor. It all fits with Skoda’s ‘Simply Clever’ philosophy to a tee.

The interior layout is familiar to anyone who’s been in a modern Golf or Polo. The precision instrument binnacle and gorgeous steering wheel are seen in other models, but some brand-unique touches such as the cruise control layout and green backlighting really set the car apart as having more character than its Wolfsburg Vee-Dub relations. 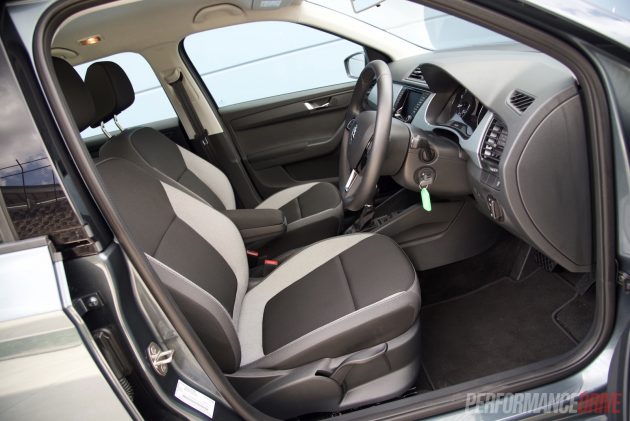 As soon as you sit inside, the driving position feels just right, and all occupants are given decent room. This is definitely a long range car that could be used for eating up miles and miles of Australia’s big highways.

The brushed aluminium fascia screams classy, but may be subject to scoring or scratching after time. Nestled within that is the infotainment system which now offers new-to-VW-Group Apple CarPlay and Android Auto functionality. It is intuitive with crisp graphics and logical operation, allowing both knob and touch-screen control. 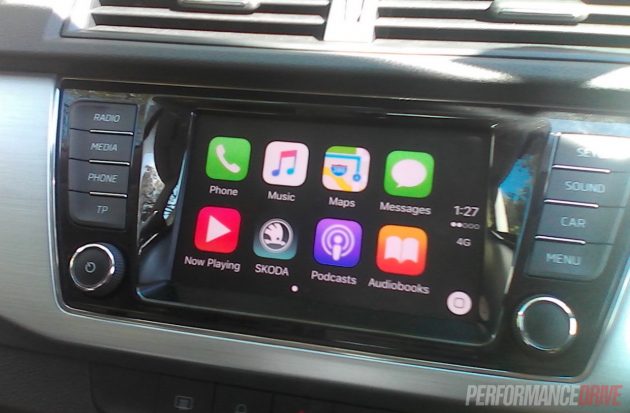 The smartphone interfaces, as part of what Skoda calls SmartLink, are just awesome in the way they give you an interface within an interface, and add Spotify and Pandora apps. This is going to be a make-or-break feature in the battle for showroom supremacy across all brands.

The steering wheel is a thing of beauty we think. It’s perfect in size and offers plenty of range in adjustment, with spokes that never get in the way. Some of its switchgear operates the central instrument display that includes a digital speedometer and full trip computer.

As for the climate control module, it is a conventional rotary type but doesn’t suffer for it. It is simple and effective, and like most controls in the cabin, it has a quality feel to it with sturdy buttons. Speaking of sturdy, the Fabia has scored a five-star ANCAP safety rating, helped by a solid body, standard forward collision auto braking and six airbags. 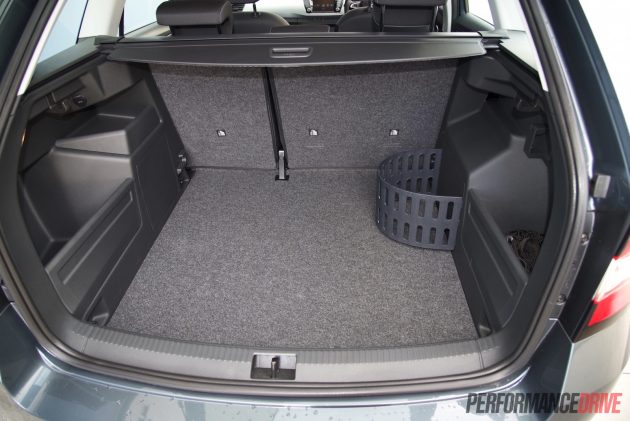 As the Fabia bursts into life, it adopts a slightly gruff idle note, typical of direct-injected engines. As soon as you set off though it becomes smooth and refined, offering immediate response and a surprising amount of speed. The gearbox and engine are a match made in heaven, even firing up gradients with disdain. Pull the lever into S mode and you have yourself a fiery little overtaking monster.

This DSG isn’t afflicted with serious rollback, smoothness and creep issues like VW’s older and competitor’s current (looking at you, Hyundai) systems. It feels almost as smooth as a normal, torque converter auto. Seven ratios ensures it has large-car cruisability, as do the inherently low NVH levels (noise and vibration) and sheer comfort.

The steering is very playful, possessing an organic, well-weighted feel despite being an electric system. It is so well judged and confidence-inspiring around a tight set of bends. It combines superbly with the drivetrain to become more than the sum of its parts. Ride quality is usually good but somewhat terse over sharp and sudden bumps. On the plus side, body stability and cornering precision is quite high, for this class anyway. The non-switchable DSC doesn’t interfere unless it really has to, leaving a surprisingly fun little package.

During our time with the 81TSI we recorded an average of 7.1L/100km in fuel consumption, which isn’t bad, but very far from the 4.8L/100km official average. It’s worth noting the naturally aspirated Mazda2 we featured last year from this segment achieved within 0.8L/100km of its official claim.

Service intervals are every 15,000km, with a $1799 Skoda Care pack offering three year/45,000km servicing and five years free roadside assistance. This could be a worthy addition, or a potential haggling tool during end of financial sales.

By now you’ve probably figured we like the Fabia a lot. The infotainment, driving experience, refinement, cute yet classy styling, and powertrain might be best in the class, if not very close. If we were testing the manual variant, the Mazda2’s superior gearshift and engine would probably give it the edge overall.

It’s very hard to fault the Fabia. It’s loaded with character and value. Even if you pick the $17,140 66TSI Fabia wagon, you’re getting a great package. We want this car to succeed so other carmakers get on board the micro-wagon express. Because let’s face it, wagons are awesome and SUVs have had more than their fair share of time in the sun lately.