Ever wondered what the quickest Audi S4 in the world is? A video has just surfaced online showing a highly modified second generation version cracking the quarter mile in just 9.61 seconds, making it, allegedly, the quickest in the world. 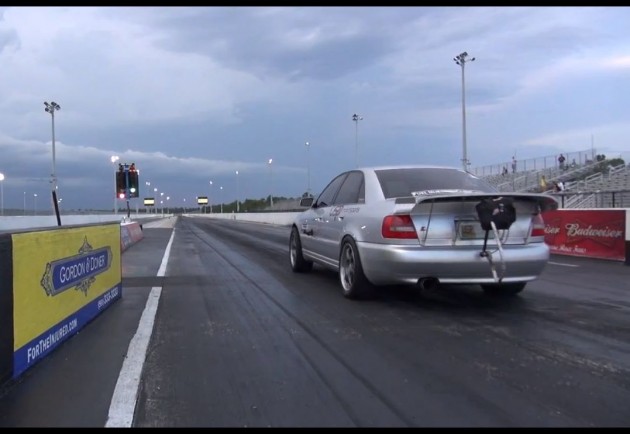 The awesome-sounding S4 is built by USP Motorsports in the US. It doesn’t feature the original 2.7-litre twin-turbo V6, as you might have guessed. Instead, it gets a complete custom-built Volkswagen VR6 engine, mounted longitudinally.

Modifications include a 67mm Precision turbocharger, a Haltec engine computer calibrated to run the engine on 85 per cent ethanol fuel, as well as various body modifications to assist in serious drag racing. Power is rated at over 800hp (597kW) at the wheels.

The quarter mile time of 9.61 seconds at 246km/h (153mph) is apparently the quickest and fastest an S4 has run in North America. USP Motorports also claims the time is the quickest in the world. As far as we know, it very well could be.

Click play on the video below to take a look.