This is not something you see everyday; it’s an Aston Martin Rapide crash caught on video as it happened. The crash occurred while owner Roberto Ricci was taking Dave White, editor of MPORA, for a quick spin. 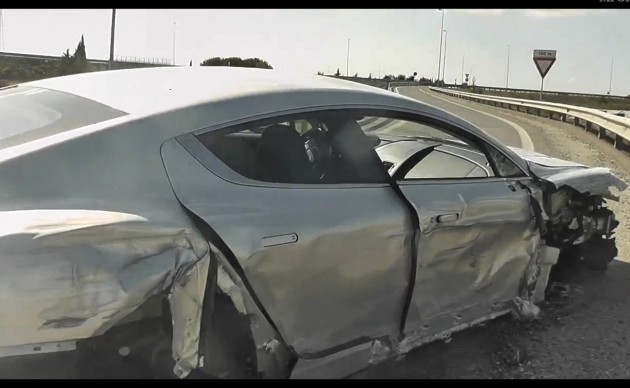 Roberto Ricci, founder of RRD surf equipment designs, recently took his Aston Martin Rapide for a bit of a trash with Dave White, editor of MPORA. Unfortuntely, during the quick test drive, Mr. Ricci lost control of the big Rapide and sideswiped it into a guard rail.

As with most Italians, Mr. Ricci doesn’t seem too upset by the loss, he even jokes around about the incident straight after it happened. The Aston Martin Rapide didn’t shape up to well in the accident though, which completely tore off the front side of the car.

It appears as if Mr. Ricci was travelling up to a curve on a entrance of some kind on a motorway, when too much speed got the best of the 5.9-litre V12 sedan, pushing it into the guard rail.

Mr. Ricci later says that he turned the stability/traction control off prior to the incident, which he considered to be a bad move. Turned out, it was a bad move.

Oh well, he doesn’t seem too bothered. Click play on the Aston Martin Rapide crash video below to see it all happen.