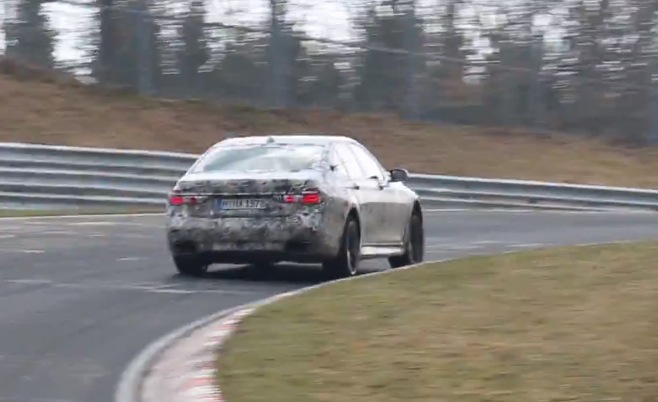 BMW has been spotted test driving a prototype version of the next-gen ‘G11’ 2016 BMW 7 Series out on the Nurburgring in Germany. The test car appears to be wearing some sort of M Sport pack. 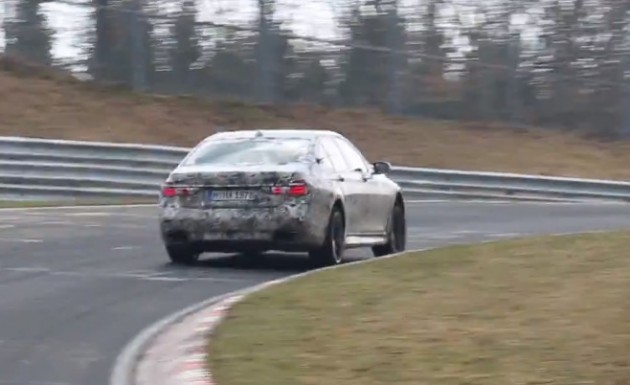 Test drivers must have been given stern orders by BMW to give the prototype a real trashing, because the test mule in the quick video below is certainly being tested to its limits. This suggests the company could be calibrating a performance M Sport edition.

There has been rumours of an ‘M7’ being in the works, although an ‘M750i’ is more likely. BMW has been introducing sub-M models, including the M135i and M235i. According to reports the apparent M750i will come with a tuned 4.4-litre twin-turbo V8 producing around 441kW.

Beemer fans will be quick to point out the current M5 features a 4.4-litre V8 producing 423kW, however, it’s believed M engineers will tweak the unit for the larger 7 Series. Nothing is official just yet though.

The prototype in the video showcases large alloy wheels, quad-outlet exhausts, aggressive intakes in the front end, and appears to be using a lowered sports suspension system of some kind. These are all hallmarks of an M car.

Regardless of whether it is an M7 or M750i, or just an M Sport pack, the new 7 Series will be built on a fresh, lighter weight platform made predominately of aluminium. There’s word the new model could drop around 200kg. This would obviously help out with performance, handling and efficiency.

Click play below to have a look and listen, and feel free to tell us what you think it is. A full debut is expected towards the end of this year.