What’s the fastest production car in the world? Hold your horses, before you blat out Bugatti Veyron, Bugatti Veyron, let us just let you in on some massive news; the Hennessey Venom GT has just hit a cracking pace of 427km/h. 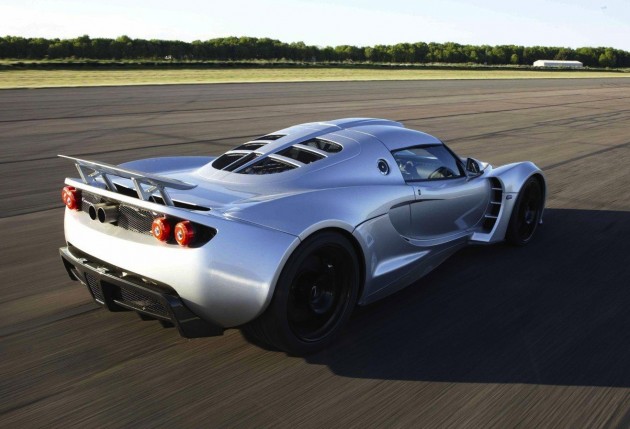 We know what you’re going to say next, but in fact, you’re a little bit wrong. Even though, yes, the Veyron Super Sport has officially hit a top speed of 431km/h, the Super Sport was a limited edition model. This means it’s no longer on sale. The regular Veyron has a top speed of a mere 408km/h.

On February 9, a man named Brian Smith hit 427.6km/h in a Venom GT at the Lemoore Naval Air Station in California, USA. By the sounds of it, there’s some more left in it, and another attempt could be on the cards for an even greater top speed.

To provide such a colossal velocity, the Lotus-based Venom is propelled by a 7.0-litre twin-turbo V8 producing an incredible 928kW of power and 1564Nm of torque. In a car weighing just 1244kg, the power-to-weight ratio is just insane.

Click play below to see an overview of the run demonstration. Another run is expected to take place in the near future to once and for all reset the record books.