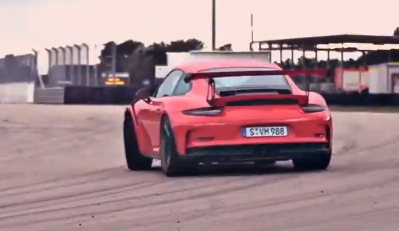 Considering buying a track car? You need to see this latest video from Porsche, showcasing the epic new 911 GT3 RS carving up the Nardo test track in Italy.

To refresh your memory, the new GT3 RS is the company’s most serious track-ready 911 currently on offer. It takes the already high-performance GT3 and turns everything up to level 11. There’s a bespoke 368kW 4.0-litre flat-six engine, a partially stripped out cabin, and a revised dual-clutch auto transmission.

In the video below we get to see how the package performs in the hands of Porsche factory driver Brendon Hartley. He talks about the car at Porsche’s on-site facility at Nardo, and then takes the RS for a decent trashing out on the track. Click play below to see the action.

The 911 GT3 RS is on sale in Australia now, priced from $387,700 (excluding on-roads). Deliveries are scheduled to arrive during the third quarter of this year.