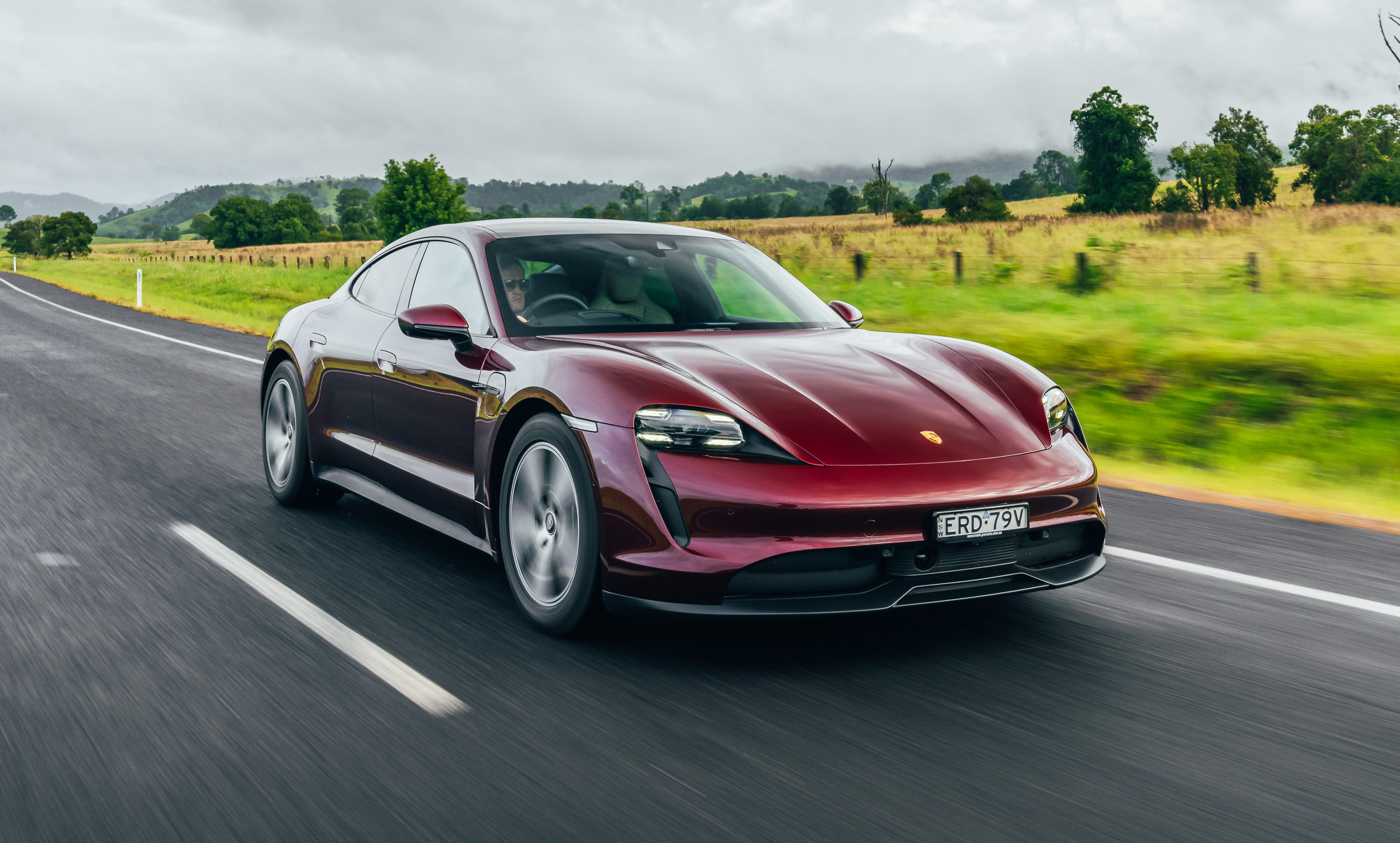 Porsche Australia has just opened up the market reach for the Taycan fully electric sedan, with the launch of a new entry-level RWD variant for 2022. It is the most affordable version yet. 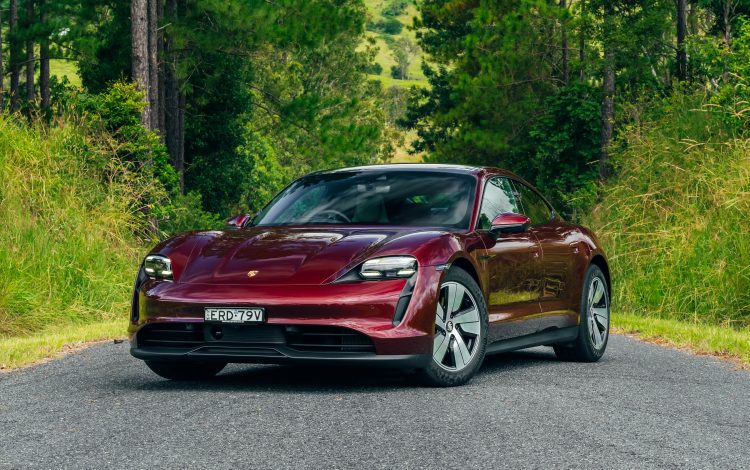 If you didn’t already know, the Taycan is Porsche’s first future-generation vehicle. An electric vehicle, in other words. And so far it has been very popular. During 2021, the company sold 531 examples in Australia according to VFACS figures. That was enough to claim title as the second-best-selling model in the showroom, only behind the Macan. Yep, it outsold the 911 (428 sales), the Cayenne (402), and even the 718 Boxster (109).

So far the Taycan has been offered in 4, 4S, GTS, Turbo and Turbo S levels. And in sedan and Cross Turismo SUV/wagon forms. Porsche, or at least the Australian arm, has developed a bit of a habit lately releasing the top models before the entry grades, as we saw with the 911 Turbo S followed by the 911 Turbo.

Well, it’s the same here. This is the simplest version you can get, featuring just a single rear-axle motor among the twin-motor brothers and sisters. Despite the simplicity it’s not exactly cheap. But then again, what Porsche is? Prices start from $156,300. That might seem like a lot for a base model but it is actually more affordable than the entry level Porsche Panamera (starts from around $200k). 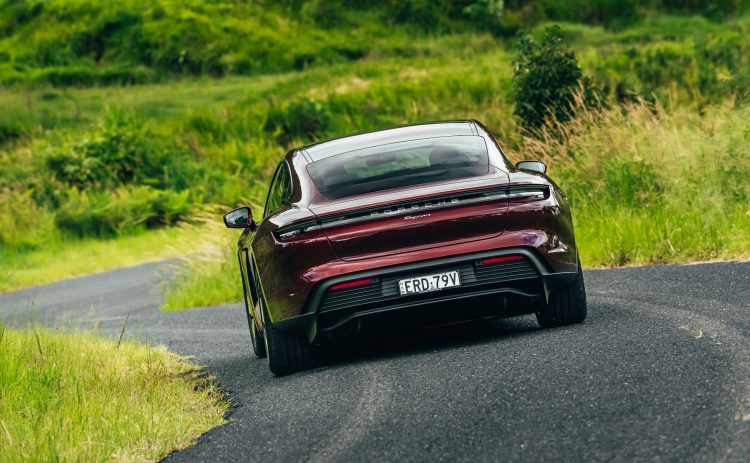 The great thing about this base model is that it looks pretty much exactly the same as the upper-spec variants, which is to say, it is beautiful. There is a lot of presence about it too – onlookers always seem to take a second glance. We love the full-width taillight at the back, the curvaceous wheel arches and muscular rear haunches, and the overall clean and clutter-free body lines. It is unmistakably a Porsche.

Really, the only visual difference is a set of aero-style 19-inch alloy wheels. And interestingly, these are wrapped in relatively tall-profile 225/55 front and 275/45 rear tyres. Unlike the flagship Turbo variant, which uses Goodyear Eagle F1 tyres, Porsche has opted for Hankook Ventus S1 Evo3 for this model. We also noticed another identical test car on this launch event that wore Continental PremiumContact 6 (same size) tyres. Either way, they are going to be more cost-effective in the long run than the higher-performance options. 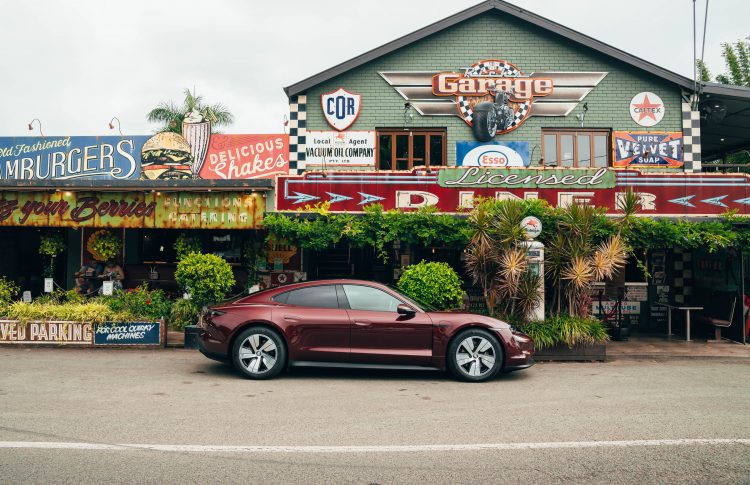 Also helping to save costs is a steel spring suspension setup. This is a first for the Taycan as all others come with air suspension. As we discovered with the Taycan Turbo a few months ago the ride is truly sublime from the air suspension setup. It defies physics, the way it can absorb harsh bumps while somehow not ever bottoming-out, even with its low and sporty stance.

Well, good news. This steel spring arrangement is utterly brilliant as well. If anything, you get a slightly higher sense of connection with the car, at least at times. It is mechanical and raw, providing clear but not unpleasant feedback on the road’s surface. Sometimes air suspension systems can hide minor bumps and ripples. Whereas a well-sorted steel spring system like this can provide more wholesome interaction.

Perhaps most importantly though, the comfort is still there. No sudden jolts or bumpiness. It irons the road flat. Body control is also excellent, however, we did notice some gentle understeer and tyre squeal when pushed hard in tight S-bends. We blame, in part, those tallish tyres. 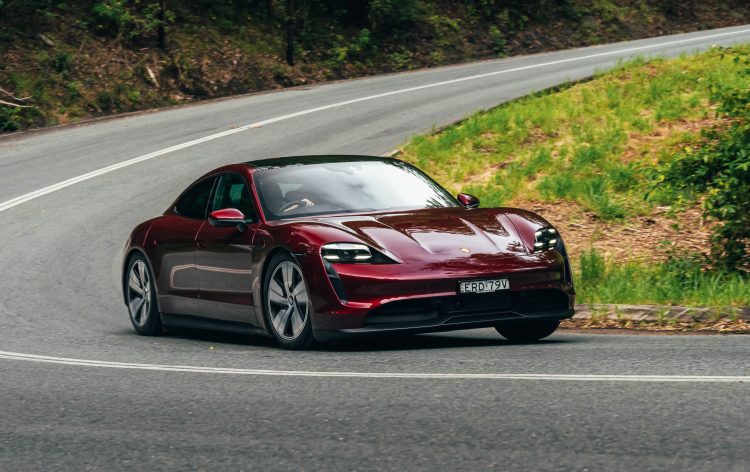 Of course the other culprit is the weight. Electric vehicles are inevitably heavy these days. Hopefully technology like lithium-air and solid-state batteries come to fruition soon. But for now heavy weight is simply what we have to accept with EVs.

This weighs 2050kg, or 2130kg with the larger Performance Plus battery. That’s bloody heavy for a two-wheel drive sedan. Porsche has obviously done its best to hide and even optimise this weight by keeping it located as low as possible within the platform, helping to improve handling and stability.

Speaking of the battery, you can have the absolute entry-level setup which includes a 79.2kWh unit or spend an extra $12,020 and you can get the Performance Plus unit – the same as all upper-spec models. The default system provides a range of 369km, which isn’t all that great for a modern EV, while the 93.4kWh unit expands that to 434km. 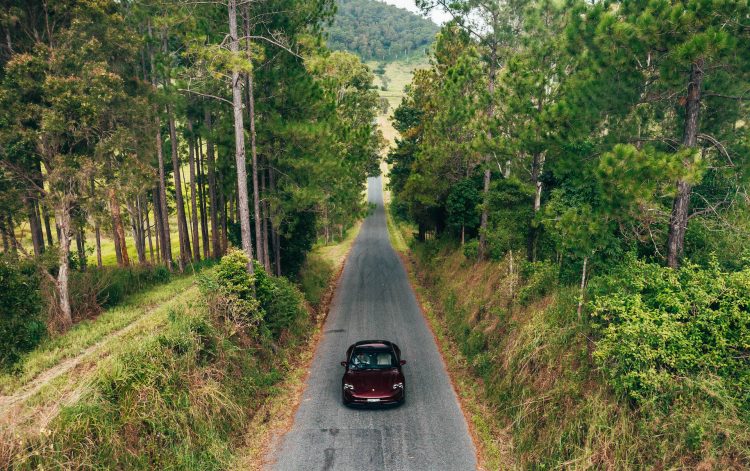 During our drive we toured around Noosa in Queensland along some country open roads, and ventured up into the hinterland where we ascended some fairly steep hills; to give you an idea of the conditions and demands. Steep hills, in particular, like to draw plenty of battery juice. After about half-a-day of driving these test cars still had about 50 per cent charge left. We even ran some 0-100km/h tests on a quiet backroad.

Overall we found the state of charge very consistent and predictable. You can engage a higher-pressure regenerative braking mode via a button on a steering wheel, but, frankly, the ‘braking’ pressure doesn’t feel as strong as it does in other EVs. It won’t really pull you up to a complete stop at the traffic lights, for example. However, during the downhills stints we watched the range jump up a few kilometres, but not so much without the mode engaged. 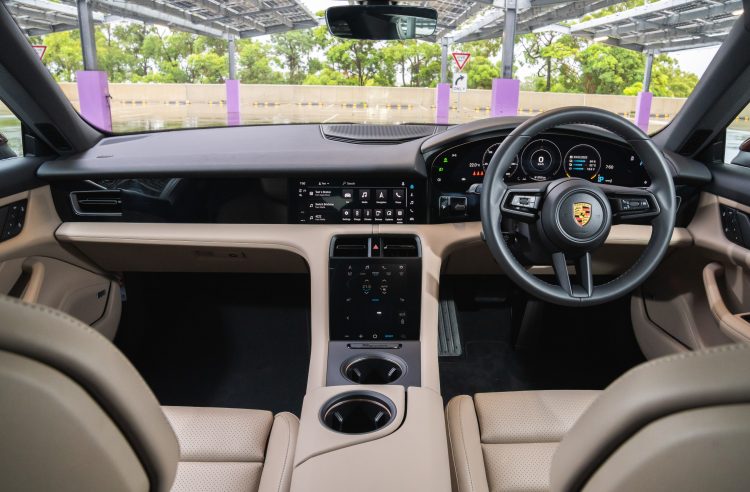 Being almost completely silent as you drive along definitely enhances its luxury qualities. And in that sense it is more majestic and comfortable than an equivalent petrol sedan, including the Panamera. If you are looking to buy a high-end limousine-like model because you just want absolute calmness and tranquility, you absolutely must test drive one of these. Especially if it was not already on your radar.

Unlike traditional large sedans the Taycan showcases a sporty profile. So inside it is a bit intimate and focused, with a natural and well-aligned driving position. Controls and buttons are kept to a minimum, and passenger space is good but not expansive. The rear seats are sculpted like the front ones too, giving you more clues to its driver-focused character. You can option for a middle rear seat, but it is a 4+1 configuration and the seat is raised and not as comfortable. 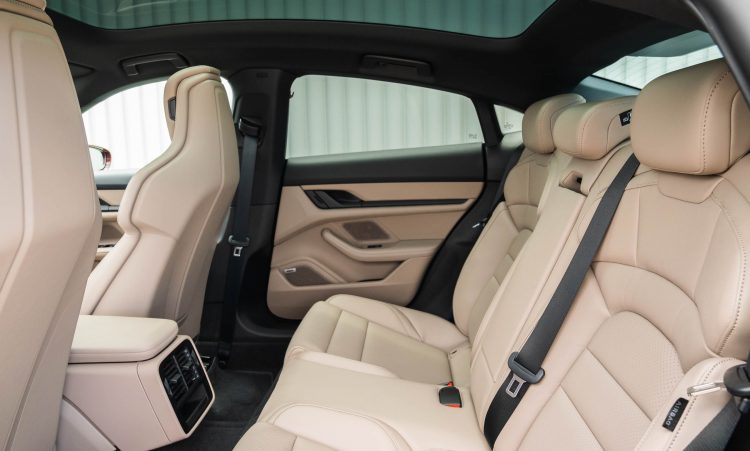 Four-zone climate control is available as an option, again, suggestive that this is more sports car than chauffeur-centric. That’s not a criticism on our end just an observation to note if you are looking for a back-seat luxury vehicle.

All on-board functions are controlled through two touch-screens on the dash and console, with a big curved screen for the gauge cluster. The cluster is a real standout, offering a huge scope for display options, and they are very easy to configure by simply using the spiny-wheel toggle on the steering wheel. 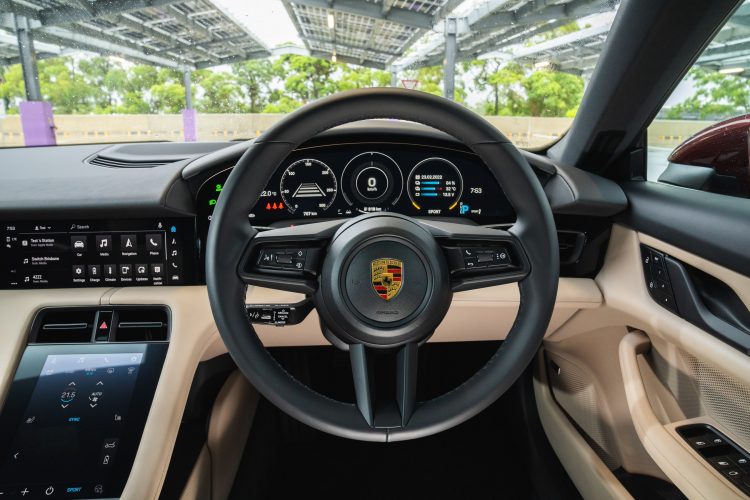 As standard you get a 10-speaker sound system, or, option up to an epic 21-speaker Burmester 3D surround-sound unit. Although it’ll set you back $12,470, we reckon it’s worth it. After all, you won’t be overpowering an exotic engine sound so you might as well have a stunning stereo on hand. Apple CarPlay is standard but unfortunately for android users Android Auto is not available.

In the back you have a 407-litre boot. It is big enough for everyday needs, running quiet deep and forward, but a bit tight and shallow for loading bulky items. There’s also 84 litres available under the bonnet. If you need more space there’s always the Taycan Cross Turismo wagon. It presents 446L or up to 1212L with the rear seats folded.

Having this new RWD option certainly opens up the Taycan’s appeal to more buyers. It’s a great opportunity to draw in motorists new to the Porsche brand as well. The no-fuss approach for the powertrain and suspension mean it is not intimidating to drive, at all. Yet it’s also plenty fast enough without being ridiculous, and steers and rides like a dream. Again, all ideal cocktail for those looking to immerse themselves in the Porsche experience for the first time.

If we were in this market and it was our money though, we’d gather up another $30-50k from wherever we got the first $156k from and step up to the 4 or 4S. It’s not that this version is inferior, but rather, we think you’ll enjoy the 4 and 4S even more. Especially if you’re a serious driving fan or a bit of a thrill-seeker.