Up to 11 high-end and very desirable supercars were repossessed in Africa in 2011, and now all have been sold for just 3.1 million euros (AU$4.4M) at an auction in Paris. Although it is expensive, some of the cars, such as two Bugatti Veyrons and a Ferrari Enzo, are worth almost one million each. 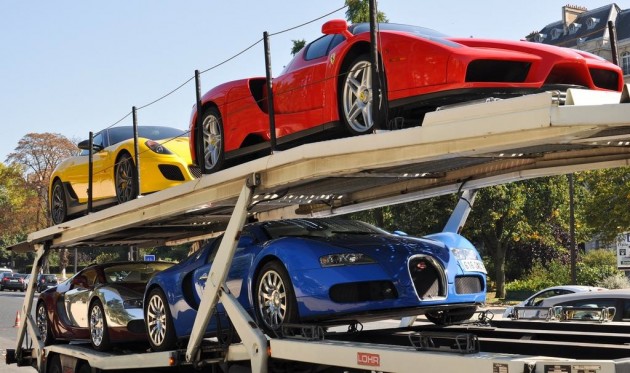 It’s understood the cars were originally owned by the son of Equatorial Guinea President Teodoro Obiang Nguema Mbasogo, whose name is the same only with ‘Mangue’ on the end. The cars were seized in 2011 during an investigation, and taken from the president’s mansion near Champs Elysees which features 101 rooms, and a mighty garage.

So what has the lucky buyer ended up with exactly? There are two Bugatti Veyrons, a Porsche Carrera GT, a Ferrari Enzo, a Ferrari 599 GTO, a Maserati MC12, a Rolls-Royce, a Mercedes-Benz Maybach, and a couple of Bentleys – most of which have very low kilometres on the clock.

According to a recent International Business Times report in the UK, the vehicles belonged to a collection of 26 supercars owned by Obiang, which were originally imported from the US back in 2009.

Wouldn’t it be nice to have this truck heading to your garage?