When an SUV goes up against a range of supercars in a mile drag race, you know it’s not going to be an ordinary SUV. As is the case with this Jeep Grand Cherokee SRT8, which has a supercharged V8 engine producing 1000hp. 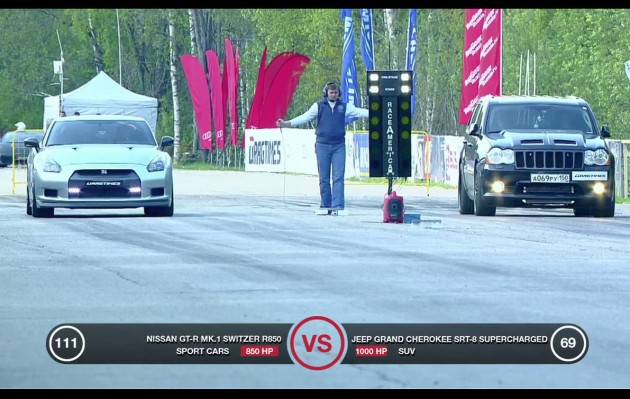 The guys at DragTimesInfo in Russia have put together another one of their epic races, this time including a 1000hp Jeep versus an Audi R8 V10. After that, they pitch the Jeep up against a tuned Switzer Nissan GT-R with 850hp, and then a BMW X6 M tuned by Evotec with 620hp.

Under the bonnet of the Jeep sits a stroker version of the 6.1-litre HEMI V8, expanded out to 7.2 litres, with a supercharger pushing air through a front-mounted intercooler and into the engine to provide 1000hp. By the sounds of it, it features a centrifugal-type under-bonnet blower.

We won’t spoil the results on you. Take a look at the video below for all three runs. That Jeep is one beast of an SUV charging down the straight. Great shots too.