Vauxhall has revealed the new Vauxhall Astra VXR GTC performance coupe. The GTC-based VXR will be the fastest and most powerful Astra ever made, and offer 207kW (277hp). 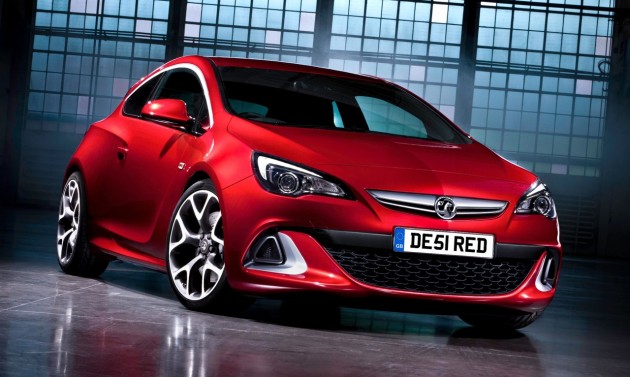 The new Vauxhall Astra VXR is based on the well received Vauxhall Astra GTC and Opel Astra GTC, featuring a sporty coupe hatch layout with a highly refined chassis and a promising handling setup. It uses the GTC’s complex HiPerStrut (High Performance Strut) front suspension system and a mechanical limited-slip differential for the optimum front-end balance and performance.

Under the bonnet, the Vauxhall Astra VXR GTC gets a 2.0-litre turbocharged four-cylinder engine using direct injection to produce a healthy 207kW of power and a hefty 400Nm of torque – the same torque as the current V8 BMW M3. Possible acceleration times for the 0-100km/h sprint haven’t been mentioned but Vauxhall says the new Astra VXR will have a limited top speed of 250km/h. We could expect 0-100km/h to come up in the 5.0-seconds range.

Other racy features include a chassis and suspension setup that has been tuned and honed with many hours of testing on the Nurburgring in Germany. The testing has been overseen by ex-Le Mans racer ‘Smokin’ Jo’ Winkelhock, who recently said,

“We have devised a great package that will convince even the most experienced and enthusiastic drivers – and not just on the Nurburgring!”

The new Vauxhall Astra VXR GTC will also feature a Brembo braking package and Vauxhall’s FlexRide system. The FlexRide system gives the driver the opportunity to change driving modes from inside the cabin via the use of a Sport button and a new VXR button. These options change the Vauxhall Astra VXR’s steering, throttle and suspension settings for accordingly desirable driving characteristics.

Since this is a Vauxhall, it’s very unlikely to go on sale in Australia in this form. However, Opel Australia has hinted that the Opel Astra GTC – the German version of the Vauxhall – has been earmarked for possible inclusion in the upcoming Opel range. Opel Australia managing director, Bill Mott, previously spoke about the normal Opel Astra GTC making its way Down Under, saying,

“It will launch in Europe before the end of the year [2011] with a range of powertrain combinations and we’ll be looking at it closely for the Australian market.”

When questioned if the performance arm of Opel, Opel Performance Centre (OPC), would make it to Australia, Mott said,

So there might be a chance a version of this Vauxhall Astra VXR GTC hitting our shores some time in the future. Fingers crossed then. Mott has also said that if the Astra GTC were to make it to Australia, it would more than likely occur during the second phase of Opel’s introduction into the country.

What do you think? Would you love to see this coming to Australia? It could be a handy front-drive weapon providing some tough competition to the likes of the upcoming Ford Focus ST and even the Volkswagen Golf R to a certain degree.