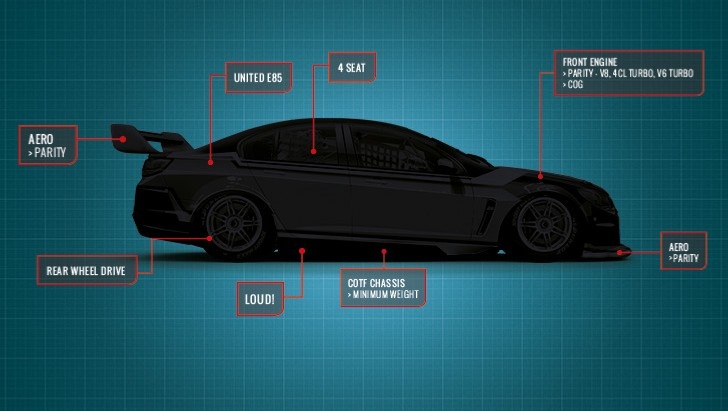 V8 Supercars has announced that as of 2017 the sport will open itself to new engine and body configurations, and the cars must be based on road-going models sold in Australia – similar to the current setup. 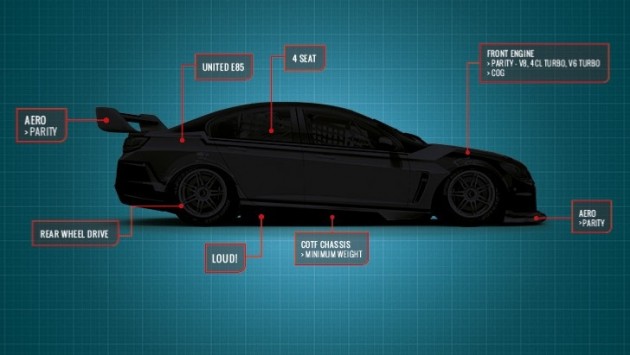 Called the Gen2 Supercar, the series will be “designed to be more relevant to more manufacturers, race teams, sponsors and fans while continuing V8 Supercars’ promise of providing fans with the ultimate in high octane entertainment”.

The new rules dictate any car to compete in the series must be based on a car that’s on sale in Australia, and that it must use a front engine layout, and feature a full four-seat arrangement. The race car must also correctly reflect the look of the road car. The race cars will also remain rear-wheel drive, and most certainly run on E85 fuel.

All race cars for 2017 will retain the existing Car of the Future chassis and connected components, and meet engine and aerodynamic parity rules. As we mentioned in the opening sentence, the new rules state the series will open its doors to new engine configurations, such as the introduction of four and six-cylinder engines, which could feature turbocharging technology.

The rule change means we could see manufacturers such as Hyundai, Kia, Volkswagen or even BMW join the sport, and see them use and develop some of their various six and four-cylinder turbo engines – imagine seeing a turbo six-cylinder BMW M4 go head to head with a V8 Ford Mustang around Bathurst.

With Ford and Holden both retiring their V8 road sedans by 2017, the rule change could also mean we see the V8 engine completely removed from the sport, and teams such as Nissan and Volvo revert to using smaller engines that reflect the engines used in their road cars.

The aim is to publish engine and body operating guidelines by mid-2015 so that they can be honed and finely tuned over the course of the year, allowing testing for the 2017 series to commence from February 2016. V8 Supercars CEO James Warburton spoke about the changes on the V8 Supercars website, saying,

“It is imperative to keep the sport relevant to the current environment, entertaining and, critically, viable for the race teams.

“The current climate in world motorsport is absolutely clear. Manufacturers want choice in what they go racing with, otherwise they won’t participate. They want their DNA represented and so do we. We will not compromise our DNA – fast, loud and fierce racing.

“The sheer brute power and sound of V8 Supercars is synonymous with the sport. A key area will be retaining the acoustic effect of high powered race cars no matter the engine or make.”