Lotus is planning to unveiled the new Lotus Evora GTE Road Car Concept at this weekend’s Pebble Beach Concours d’Elegance in California, USA. The company has revealed an early image of the GTE Road Car which is based on the GTE Race car. 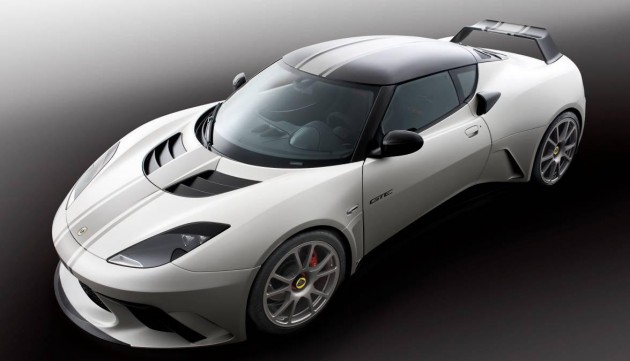 Sharing much of the personality as the GTE Race car, the GTE Road Car Concept features a more aggressive body compared with the standard Evora. It gets a larger front apron with a chunky chin spoiler, air intake snorkels behind the doors and a large rear spoiler. All of the highlights are coloured in black for extra detail, including the roof.

Official word on possible production of the Evora GTE Road Car Concept hasn’t been announced, so far the company only says this will be a one-off example, previewing what the company is capable of producing in the future. Reports worldwide can’t help but speculate that Lotus will be producing a limited number for the market though. Lotus recent spoke about the concept in a statement, saying that it,

“Isn’t merely a paint scheme or homage to a race car – this is a serious race car that makes for a very serious road car.”

Down to the nitty-gritty, the GTE Road Car Concept features plenty of race-inspired equipment, including a 3.5-litre V6 engine, based on the standard Evora unit, pumping out 313kW of power. The unit is hooked up to a sequential automated manual transmission. Other highlights include racing suspension and lightweight forged alloy wheels.

Before cancelling out the possibility of the Evora GTE Road Car Concept going into production, we should at least wait until the car is fully unveiled at the Pebble Beach Concours d’Elegance event this weekend, and see what Lotus says. Until then, we can only dream, but we’ll keep you posted. Pretty cool concept though don’t you think?