The BMW 1 Series M Coupe has certainly received its fair share of publicity and media attention lately. The latest comes in the form of this RevoZport BMW 1 M Coupe Raze P450. 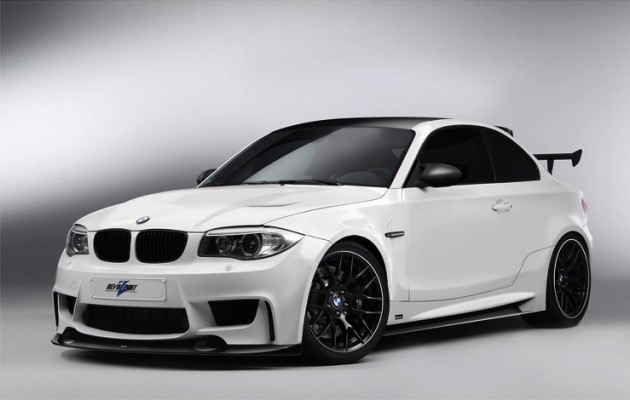 The BMW 1 M Copupe has receive a lot of hype even though it has only been on sale in some markets for a very short time. As far as tuning goes, we saw the Kellners Sport KS1-S, but now here’s something a little more dramatic.

It’s called the RevoZport Raze P450, and yes that ‘450’ does refer to the amount of horsepower on offer. Although, tuning specialist RevoZport, in conjunction with CP Engineering, hasn’t actually produced a version of the car yet, the Raze P450 kit is just a proposal at this stage but a package will be on the market soon.

It starts with an almost entirely new bodykit comprising mostly of carbon fibre parts and panels. There’s a new front splitter, front brake cooling ducts, a carbon roof, carbon bonnet, carbon boot lid and rear diffuser. All up these parts are said to provide an overall weight saving of 60kg.

Under the bonnet is where things get even more tantilising. RevoZport is confident it can extract up to 450hp from the TwinPower turbocharged N54 3.0-litre straight six engine. So that’s 336kW in a car now weighing 1435kg. It’s sure to be a recipe for pure fun.

Stay tuned for more updates on the RevoZport BMW 1 M Coupe Raze P450 in the near future, as well as the full engine specifications.

We must say, it does look pretty fat, and the kit doesn’t seem to ruin the natural appeal of the 1 Series M Coupe. Above all, it’s a purposeful kit that will actually provide downforce and cooling. What do you think though, yay or nay?