Whatever your idea of fun is, we’re guessing this could top it. It’s the world-record breaking two-stroke 125cc mobility scooter having some fun on an empty snow field. 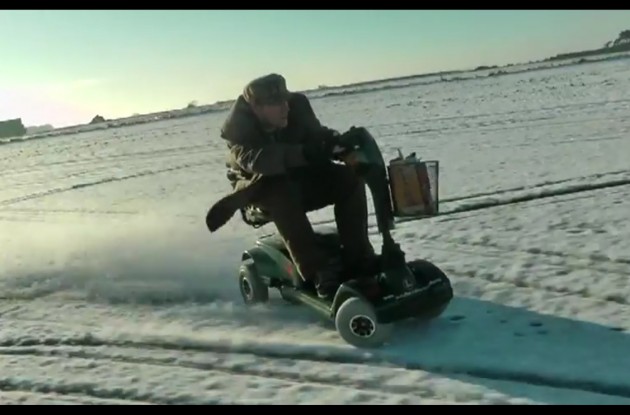 Colin Furze from the UK cracked the world record in October 2010, hitting a maximum speed of 113km/h (70mph). At the time of breaking the record he said the scooter could maintain a constant speed of around 112km/h, but nudged just over that for the record run.

The scooter is fitted with a 125cc two-stroke engine, with gears, which reportedly took Furze just a few months to convert from the original walking-pace electric setup. The conversion was also said to have cost around $650.

So what does one do after setting a speed record on a scooter? Take it for a hoot on an empty snow field of course.

Furze has said the 125cc scooter can be unstable at speed, but by the looks of it in the video, the slippery snow conditions reduce the chances of it toppling over… so long as you get a Moto-GP lean happening.

Click play below to check it out. According to the video details, the scooter hits around 80km/h on the snow.